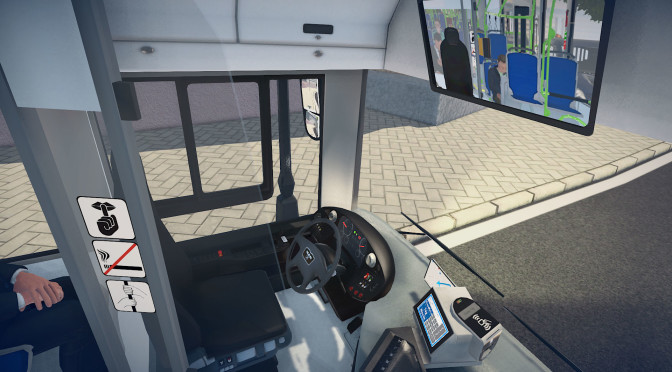 This week we’re going to step a little out of our comfort zone and check out Bus Simulator 16.

As I’m sure many of you can guess, Bus Simulator 16 is a simulation game that is based around the life of bus driving. It’s sounds simple enough on paper, but this game actually offered a lot more than I was expecting.

At it’s core Bus Simulator is indeed all about driving buses. However, it also has a strong focus on managing a small bus company as well. Players start off with only a single bus, but more can be obtained by completing tasks or just plainly buying them. You’ll also need to hire drivers and plan out their routes. There’s even the possibility of going bankrupt if plans aren’t properly laid out.

Players get weekly summaries for how their bus company is doing and there are loads of different factors that come into play. For example, insurance claims from accidents, speeding tickets and keeping employees paid are all things that need to be considered. There’s also extra ways to make money. This includes adding extra stops and placing advertisements on buses. All of these small things really add to the depth of the game and it was much more than I was expecting.

Driving buses isn’t simple stuff either. It requires players to learn the functions of several different buttons, levers and knobs that aren’t present in a normal vehicle. Learning all this doesn’t take too long, but it can become a bit hectic when things go wrong. Like, say, when a door gets jammed and won’t shut. This actually requires the player to get up and walk over to the door to manually fix the problem. There’s also a cash register that players will have to use to print out tickets for some customers. You’ll also have to give them back the proper change. I hate math so very much. Mostly because I suck at it, but what’s in the game is all simple enough that I could quickly do it in my head. All of this takes up time, which can delay stops and reduce your company’s reputation.

Reputation matters in Bus Simulator 16. A better reputation rewards players more passengers and other perks. It’s earned by being a good driver, and that means resisting every video game urge you have to run red lights and mow over pedestrians. This was a little tough for me at first, but I got it down eventually. I’m still not good with speed limits though. I think I single-handily fund the local police force. Once you get used to it though, it’s actually kind of enjoyable going through a day and taking tickets from passengers. I’d never want to do it in real life. Super antisocial and all that. It’s part of the reason I’m a writer, but it works in-game.

Bus Simulator 16 actually has some real solid graphics. I’ve played a few simulators in the past and I’ve never been all that impressed with the environments, but this game really pays a lot of attention to them. There’s also a lot of options for customizing buses with different paint jobs and decals. One of mine is a hippie bus covered in different colored flowers. One problem I do have with the game are frame rate issues. My rig is nothing to scoff at, but I still found myself experiencing a horribly jerky camera when trying to look around. It wasn’t bad all the time, but it definitely occurred way too much for me to just ignore it.

The audio in Bus Simulator 16 is lackluster to say the least. All of the voice acting is very dry and it sounds like there was no direction given to the talent. (Kind of like the new Fire Emblem game. Yes, I’m taking a jab at it.) There’s also no interesting music to cover this up with as the in-game radio is filled with generic tunes. Still, at least all the bus sound effects are good.

Overall, Bus Simulator 16 succeeds at what it set out to do. It’s a really solid simulator that captures the feel of owning a small bus company and driving routes every day. It’s not for everyone and it does have some problems, but they aren’t enough to cripple this title.