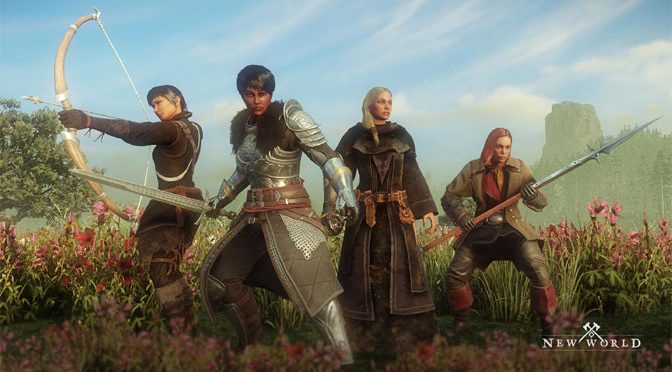 In the wake of the Blizzard/Activision scandal, so many people I know have dropped their World of Warcraft subscriptions. I have no idea what the actual figures are, but I suspect it created a vacuum in the MMO clientbase. New World capitalized on that void as Amazon’s first MMO, possibly even beyond the internet giant’s expectations. Players have flocked to the game, causing ridiculous server queues. However, if you can get through and get to the game, Amazon may have crafted a decent MMO.

After your ship crashes, you end up on an island called Aeternum in one of a handful of randomly assigned starting zones. After that, the game’s name becomes a bit of a guide. New World takes place in a fictionalized version of the 17th century Age of Exploration in which magic exists, but the underlying idea is to travel to this new world and set up colonies, ostensibly in order to funnel resources back to the mainland. Upon arrival, you’re capable of crafting, and indeed crafting forms a major part of gameplay. 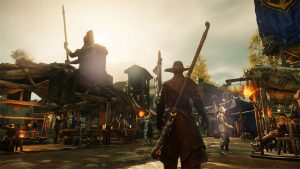 Once you hit level ten, you can join one of three factions: Marauders, Syndicate, and Covenant. None of these factions get along with the others, which is where the PvP dynamic comes into play. Upon selecting a faction, you can then join a company which functions like a guild except that your company can and will take over and hold territory.

While inter-faction squabbling occurs, there is also a global enemy in the Corrupted. The Corrupted, much like the other factions, seek to obtain and control territory on Aeternum but just happen to be a touch more undead than everyone else. Thus, while you’re out and about questing to level up or looking for resources, you also have to keep a weather eye out for Corrupted that want to kill you. That’s basically it as far as plot goes. 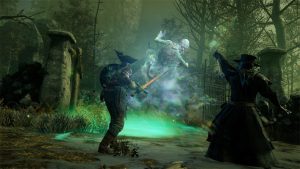 While yes story does play a role in creating a draw for an MMO, it’s hardly the overall point. Most of the gameplay consists in leveling up, preparing gear, and participating in dungeons and end-game content. What sets New World apart is that it’s a classless MMO. For this game, that means that there’s no class selection though there are character builds that lend themselves to familiar roles. Players have the option of placing their skill-points where they wish without being locked into a particular tree, which means that you’re free to customize your character in any way you see fit. For example, you can be a death-dealing, axe-wielding fiend while dabbling in healing, or you can chart out a more traditional tank playstyle for your character. It’s entirely up to you. 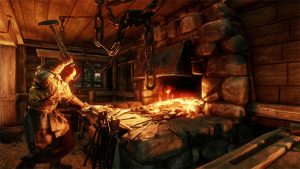 However, because the game is classless, gear, which is always important in an MMO, becomes even more significant in New World. You have to find and max out your gear in order to achieve optimum results. Here’s where New World also tries to set itself apart. While crafting armor and gear is not new to New World, the developers pride themselves that the best endgame gear is exclusively player-crafted. There are seven total professions in New World, and you aren’t limited to a set number, meaning that if you had the time and the energy, you could max out all seven. The problem is that the crafting tree runs very, very deep, so specialization is probably a better move. That way, you can craft items for sale and use the revenue to purchase other items that you can’t craft yourself. 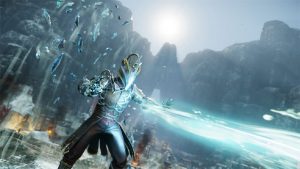 That leads us to New World’s other big difference from more traditional MMOs, which is that the economy is entirely player-driven. There are no NPC merchants to whom to sell the detritus you amass, and you amass it very, very quickly. Yes, you can break down your old gear into resources that you will use to repair existing items or create new ones, but you’re kind of stuck with anything leftover. Also, as part of the player-driven economy, faction control of a location becomes more significant because the controlling company sets taxes on items. Yep, even in the MMO world, death and taxes remain the only certainties in life. If you’re the company, you have to balance the need to generate the greatest amount of revenue with the threshold at which you’ll drive other players to other settlements. If you’re the player, you have to keep an eye on tax rates to evaluate when and if you should leave a questing zone. 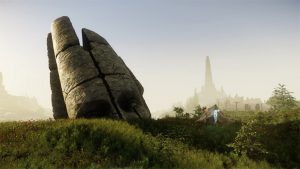 The taxes also extend to a weekly property tax. Once they meet a certain level cap, New World affords players the option to purchase land in settlements and turn it into a fully customizable home. However, as with a home you own in real life, you will pay property tax on that to the controlling company. You can lower that property tax by increasing your reputation with the settlement, but you can expect to pay that tax weekly. If you don’t pay, the game doesn’t have a repossession mechanic, but you lose the options to redecorate and gain trophy bonuses. If redecorating isn’t really your interest, you should probably pay the tax anyway because the house affords you both extra storage for the detritus you amass and the ability to return to that home like using a hearthstone in World of Warcraft. 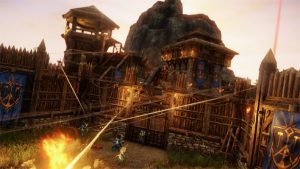 The game’s combat system is both cleaner and more complicated than the standard MMO hotkey setup. It’s based on actions that you both choose and time in order to land the maximum amount of damage on a mob. For PvE, you can expect the standard difficulties with big event-based Invasions, but with PvP content, the combat system ups the game’s difficulty level by a significant factor. Allegedly, should you so choose, you can remain devoted to PvE content, but New World is somewhat hostile to doing so. PvP is deeply, deeply important to the company system because as players engage in PvP combat, they contribute to an influence meter that allows a company to enter the lottery to become the Vanguard in the Faction’s war plan. 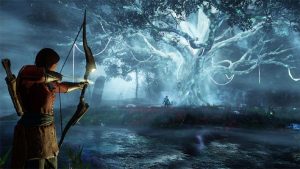 These wars form one of the game’s real selling points. They’re not random; companies schedule battles, so players have time to prepare adequately. However, not everyone will get to play. My understanding is that war battles are restricted to 50 players on a side, and Vanguard’s Governor makes the selections. Unlike a raid group, however, you don’t necessarily know if you’ve been invited or not, and just because you signed up, you aren’t guaranteed a slot. Everyone not in the Governor’s top choice list can be pulled into battle if someone from the team doesn’t show. That’s a great system for the company but less great for the player. 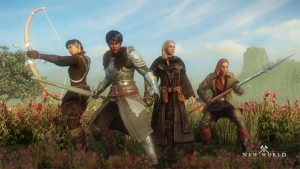 The complicating factors in this schema are both the long queue times and the AFK timer. In order to be certain that you’re prepped and ready, logging in significantly before the battle is best practice, and because the AFK timer restricts AFK time to twenty minutes, you have to be active and engaged in gameplay in order to be pulled for the war. Thus, if you don’t get tapped to represent your company, you can conceivably have wasted an entire evening. If you’re a gamer with limited play time, this mechanic can get very frustrating very quickly. 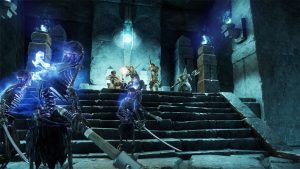 There are other game modes in PvP such as Outpost Rush and expeditions, but I can’t say much about them because I didn’t get there. The problem with any MMO is the amount of time you have to sink into it in order to get to a workable level, and realistically speaking, I don’t have that kind of time. I’m also not the biggest fan of the action-based combat system. I’ve been playing WoW long enough that my preference really is for the hotkey combat. Though you can level with crafting, as I mentioned above, that particular rabbit hole is so deep that it has yet to be completely plumbed even a week post launch, which is nearly unheard of in the MMO community. 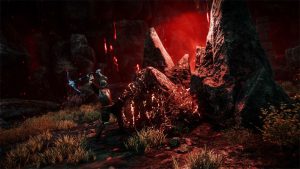 I also think that the game has balance issues. Depending on your server, a single faction can dominate, and it becomes almost impossible to oust them, especially with the server caps on player numbers. If you join a server that is so dominated, why would you join a different faction? There’s no real reason to do so, considering the faction benefits to possessing territory. I don’t know how Amazon should address that issue, but it is one that could constitute an issue for players.

I haven’t mentioned yet that New World isn’t subscription based. You pay a one-time fee to Amazon of $40 in round figures, and the rest of the game’s profit model relies on microtransactions. I don’t care for microtransactions as a concept, but I haven’t experienced any major drawbacks to it in New World. Whether that will stay true remains to be seen. 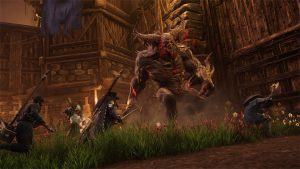 New World has the bones of being a great MMO, but there are issues even aside from the queue times and rumors that the game will fry your graphics card. The game is decidedly heavily reliant on PvP and faction membership to the point that playing PvE exclusively while theoretically possible isn’t worth doing. Plus, with the sheer numbers of players currently, there’s a tremendous competition for resources and mobs, so bear that in mind.

That said, if you like action-based PvP combat and crafting until your eyes cross, then New World may be the game for you.