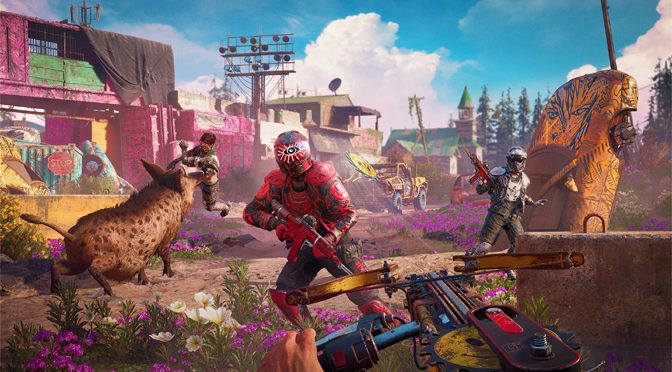 I loved Far Cry 5. I will not deny that. In fact, after beating it nearly one year to the day on Xbox One X, I repurchased the game on Steam as a benchmark for my brand new gaming laptop. And still, even with the apocalyptic ending that left many questions unanswered, I still wanted to go through the origins of Hope County, Montana again.

But as I said, a lot of questions were left unanswered. What happened to civilization after the nuclear war? Will they survive? And what about Joseph Seed? Would he be able to come to terms of his prophecy coming true? Let’s not forget about the fate of “The Rookie” who Joseph took in as his son. 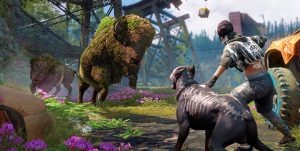 Thankfully, Far Cry: New Dawn does provide an excellent follow up to what happened. The game takes place seventeen years after “The Great Collapse,” and Hope County appears to have recovered quite well while the outside area is still polluted with radiation. Tons of purple color flora highlight society, and settlers are on the verge of starting life again. That is, when they are not being attacked by a band of BMX lookalike bandits known as the Highwaymen, and in particular their twin leaders, Mickey and Lou.

Another group of survivors, led by a local legend named Thomas Rush, arrive to assist with the recovery of Prosperity, but are ambushed by Mickey and Lou, leaving only the player (known as The Captain or “Cap”) to assist with the development of Prosperity. He is rescued by Carmina Rye, daughter or Nick and Kim Rye from Far Cry 5 who leads him to Kim and offers his service to make Prosperity a thriving settlement.

Far Cry: New Dawn appears to take place in both the Holland Valley and Henbane River sections, as well as The Father’s original P.E.G. Compound, now an island irradiated by the very same Bliss they produced for their cult. The environment features many of the same elements that were in the previous game. Prepper stashes are still around but are now referred to as “treasure hunts.” Wildlife can again be skinned and traded in for supplies to craft weapons and items, and yes, the outposts return. 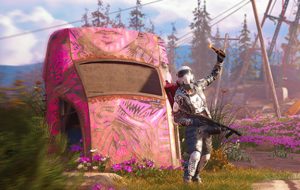 However, the outposts this time a little bit of a disappointment. There are only ten of them in the area, but in an attempt to extend their use and increase replay ability, they start at a level one outpost. Upon capture they can be scavenged for a small amount of Ethanol (currency used to improve Prosperity’s different perks) and retaken by the Highwaymen. Recapturing them at a higher level going all the way to levels two, three and Elite will yield more Ethanol. However, they also increase the number of alarms that need to be disabled, and if one gets tripped, there is a chance that not only reinforcements can be summoned, but they can also be escorted by an Elite level “Enforcer!”

[amazon asin=B07L1FTG1H&text=Pick up Far Cry: New Dawn on the platform of your choice from Amazon today!]

Weapons also fall under the same type of levelling category, with Elite weapons either being unlocked only at a Level 3 workbench or purchased via Far Cry Credits or unlocked via Club Ubisoft. Thankfully, Far Cry Credits can easily be obtained via treasure hunts, so I guess I can add this game to the “Didn’t Spend a Dime” list. 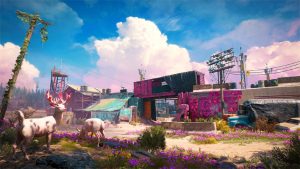 The main story of Far Cry 5 is pretty short. There are only 22 missions, but some of them can be finished right away by just talking with an NPC. Thankfully I will admit the story is quite engrossing as it goes on. Without giving too much of a spoiler away, I will say it really does answer a lot of questions I had. But also bring up a couple more. The story is in three parts, with an epilogue, with each of them having a short intermission explaining the back story of the characters. 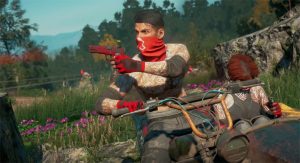 But I was not happy with all of the characters. I will say right now that both Mickey and Lou are absolutely vile with their actions! It’s strange, because in the past Far Cry antagonists have their own quirks that make them appealing. Vaas with his scene stealing anarchy. Pagan Min with his smug outlook towards his family, and Joseph Seed with his charisma (despite being a religious zealot.) But nothing about Mickey and Lou won me over. I found them to be absolutely detestable and when I was done with them I had no sympathy at all.

Still, it didn’t turn me away from the game. The visuals are amazing, once again showing what the Xbox One X can do, as well as the voice acting. Everyone (and yes, that includes the twins) put in top notch performances, which doesn’t surprise me at all. 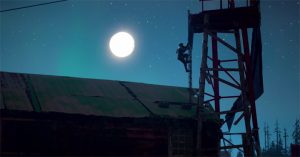 New Dawn’s story mode can be beaten in about 15 to 20 hours, but if you want to unlock everything, including special expeditions that take you OUTSIDE of Hope County to find new materials for crafting, you might be looking at about 30 hours. The game is only $40, which for a shorter experience is still a bit on the high side.

I will say that I never played the DLC packs that were part of the season pass for Far Cry 5, but from our GiN reviews, at least some of them were a bit disappointing. New Dawn feels more like a DLC to the original game, and I feel it would be better suited as such. But still, the game is quite a fun little experience that provides decent closure to the original story, and never did I think a post-apocalyptic setting could be so colorful. At least until Rage 2 arrives.

Pros: Provides closure to the events of Far Cry 5 without going too far overboard. Price of the game is appropriate for how long it is. Many popular characters from Far Cry 5 return, including one well known antagonist!

Cons: The main story is shorter compared to previous games, especially 5. Idea of scavenging outposts to recapture them at a higher level feels a bit cheap way to extend playtime. The twins are absolutely vile, and no true explanation is made of their actions aside from an ambiguous cutscene.

Ethical Disclaimer: This review is composed after a near 15 hour run of Far Cry: New Dawn played on Xbox One X via a disc supplied by Gamefly. Game was played to the conclusion of the main story.