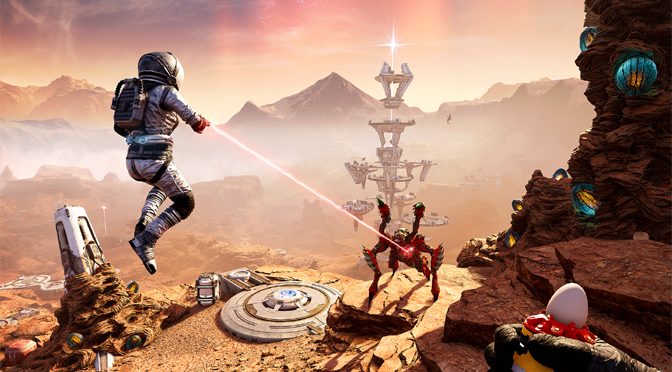 Lost on Mars is the second of three downloaded content packs (DLC) available for Far Cry 5. Many people probably picked up the season pass for cheap with the core game, as Ubisoft was running quite a few specials at the time. Depending on what tier of the game you bought, and where, you could have gotten the season pass for as little as $10 to $15. Each DLC was released over time, so you had to wait to get each one. You could also buy them separately in case one seemed really cool to you and others did not, which given how different they are, could very well be the case.

If you remember, we reviewed the core Far Cry 5 game, and it is pretty good. In fact, we pegged it as a good, if not quite great, open world shooter experience. Set in the Montana mountains, it offered a unique, USA-flavored take on the Far Cry series. And of course it had all the crazy guns and vehicles that we have come to expect from the series. 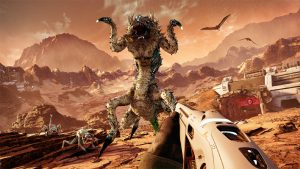 Then came the first DLC, Hours of Darkness, which was set back in Vietnam. It offered a modified open world shooter with heavy stealth elements. Sure, you could go into enemy camps guns blazing, but you were basically alone with very limited support behind enemy lines. The high availability of stealth and silenced weapons was a good clue about how you were supposed to play.

The second DLC, Lost on Mars, is what we are going to focus on now. You play Nick Rye this time around, our hot shot pilot friend from the main game. Hurk has gotten himself trapped on Mars, and needs Nick to bail him out, so he has him abducted. Hurk appears in the DLC too, though he has been ripped to pieces and now exists as a little combat robot that is your main companion here. So begins your adventure on the red planet.

While the Mars DLC does a lot of unique things, like modifying gravity so you can jump and even fly great distances, it also presents a fairly boring open world that is not much to look at. In real life, Mars is basically a giant, featureless desert, and the DLC is not much better. There are basically two types of terrain, sand and rocks. And you will quickly learn that rocks are safe, and sand is definitely not. 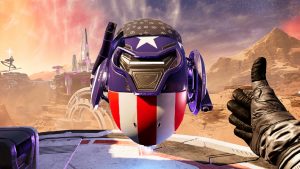 Treading across Sandy ground on Mars will trigger the game’s one main enemy, a sort of combination crab and spider creature, which burst from the sand in great numbers. Yes, just like Tremors or, sort of, like Dune. For the most part, the crab things are melee combatants, and charge right for you in an attempt to rip you apart in their mandibles. Thankfully, you are given a jetpack right at the start as part of your spacesuit, which lets you get off the ground quickly and even hover for a long time. The best strategy for fighting the monsters is to jetpack up to a high perch, either a natural rock formation or one of the weird facilities that dot the landscape, and then fire away. Some crabs have an acid-spitting tail attack, but it’s slow and no match for your weapons.

[amazon text=Pick up Far Cry 5 on the platform of your choice from Amazon!&asin=B071J1S2M7]

And speaking of weapons, you will get a bunch of new ones with this DLC. These space guns are variations of laser or blaster type guns. Honestly, they were a bit of a letdown. Like the crab monsters, they were all pretty much the same, with slight differences in performance or damage to make them kind of worth saving up enough currency (a green goo you get from barrels or collect from dead crabs) to buy their blueprints from one of the many 3D printing weapon shops scattered around the map. Given that a lot of the fun in Far Cry 5 is due to the realistic but varied weapons you can find and upgrade, being restricted to a set of 1960’s sci-fi pew-pew-pew type guns feels like a big step back. 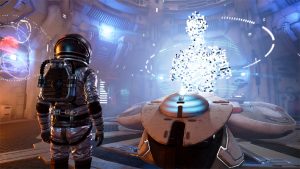 Like the core game, your missions on Mars involves liberating outposts, though your true goal is to find power cores at each one. It’s just that getting each power core involves destroying all the crabs that infest each facility and possibly going on mini-missions, like escorting a repair bot as it trundles slowly around a base patching up frayed wires. Each of those power cores will be plugged into an artificial intelligence (AI) that says it’s helping to thwart an invasion of Earth by the crabs. Nick doesn’t believe her, (it) but Hurk convinces him to keep going. In any case, you wont leave Mars without getting those cores. 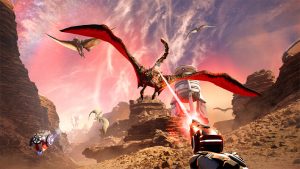 Occasionally you will have to fight a queen crab, which is basically a larger variant of the smaller ones. The queens conveniently contain a power core inside their bodies, so killing them is a necessity to fully power up the AI and finish the game. The queen boss fights are fairly tough, and also operate in stages, with the queen retreating under the sand at different points, and only coming back when you destroy enough of her eggs or other crabs in her family. Fighting them smarty involves staying back and sniping her over time, though I guess someone who really likes to run and gun could do well.

In addition to just fighting, there are tower type puzzles like in previous Far Cry games that will have you trying to get to the top without falling off and dying. The towers on Mars tend to be really high up, since the lowered gravity and your jet pack means you can leap quite a ways, even going straight up if needed. Your biggest risk with those is probably overshooting your target, or getting vertigo from being so high up. 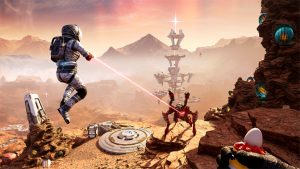 Far Cry 5 Lost on Mars is interesting, but a bit of a step down from Hours of Darkness, at least for me. The gameplay here was too repetitive, and both the enemies and weapons were not very exciting. In fact, after the initial introduction to the DLC wears off, most of the gameplay becomes a bit of a slog. I found myself pushing though it not because I was having fun, but just to clear the level and be done with it. Honestly, some of the player-made levels in the Far Cry Arcade are far and away more fun than what you will find while Lost on Mars. Play this one if you are really bored with the main game and looking for something completely different.