Our review of the core game for Far Cry 5 pegged it as a good, if not quite great, open world shooter experience. Set in the Montana mountains, it offered a unique, USA-flavored take on the Far Cry series. And of course it had all the crazy guns and vehicles that we have come to expect.

Ubisoft’s plan for the downloaded content (DLC) packs was a bit different than what is normally done. Instead of adding material to the core game, each of the three planned DLCs, while somewhat related to the core game, can stand on their own as mini-adventures. And they are vastly different from one another too, with the first one taking place in Vietnam, the second one set on Mars, and the third being the ubiquitous zombie-themed level. 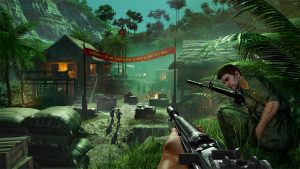 The first stop on that tour is Vietnam in the Hours of Darkness DLC. It’s only casually related to the events in Far Cry 5, being set decades beforehand. One of the collection items in Darkness are those silver Zippo-like lighters, which if you recall, you are also asked to collect in the core game for the Vietnam vet in order to unlock the treasure hidden inside his vault. Perhaps these are the same lighters.

[amazon text=Go behind enemy lines in this sneak and shoot DLC for Far Cry 5. Pick up a this DLC, or an entire season pass from Amazon.&asin=B071J1S2M7]

You play a member of a platoon going on a mission, and the intro story alludes to the fact that your group is both fairly close and also highly effective fighters. But before you are able to get started on your new mission, your Huey helicopter is shot down. Thankfully you survive the crash, otherwise the DLC would be pretty short, but are left unarmed and way behind enemy lines. Your overall mission is to reach a firebase on the far side of the map. If you go straight for it, you can probably finish the DLC in about 30 minutes. But that would be ignoring some of the best stealth gameplay produced for Far Cry 5.

Full disclosure, I am an adamant stealth gamer. I even got a shout out in the latest episode of Argue the Toss for my stealth acumen. And in Hours of Darkness, you really need to be stealthy. After all, you are alone, and deep in unfriendly territory. Going into most fights with guns blazing is going to result in you getting overwhelmed, having the enemy call in a chopper to hunt you down, or simply dropping a mortar on your head. Instead, you need to slowly creep through the green jungle hell, looking and listening for any sign of trouble. 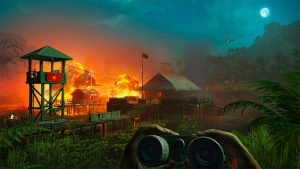 Thankfully, you are given quite a few tools for stealth operations, including a compound bow that you can use like Rambo. Most guns also have silencer variants that you can find, which is almost always going to be better in a fight here than their louder cousins. And the guns are historically accurate too, like the Dragunov sniper rifle, which will really help to even the odds. By firing and moving with a stealth rifle, I was able to eliminate an entire garrison full of enemy troops. Only, unlike the core game, lots of friendly soldiers didn’t rush in to claim it. Eventually, the enemy will retake positions that you vacate. 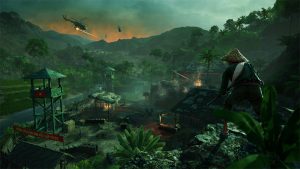 There are lots of core missions that you can accomplish on your way to your extraction point. If you rescue your missing squad mates, you can have them join you just like the hired help in the core game. I liked having them along, but none of them were stealthy (your heavy weapons guy was the opposite of stealth) so I would dismiss them from time to time when I needed some careful infiltration. You will also be assassinating enemy commanders, but will need to find their base of operations first. And you can smash propaganda speakers, collect those lighters and help out friendly south Vietnamese troops when you find them. Honestly, a lot of the cool content is well off the beaten path, so explore far and wide. 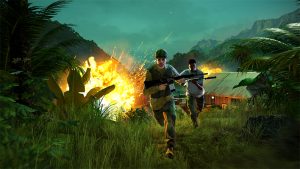 Once you reach the firebase, the level is not over. Instead, it triggers an epic defensive battle, letting you toss stealth aside and bring your full crew to bear against waves of enemies. Thankfully your one limited use skill, the ability to call in an airstrike, is made unlimited for the final fight, so drop those bombs liberally and don’t worry about the bill – Uncle Sam will pick up the tab.

Hours of Darkness has gotten mixed reviews, but I think that is mostly because players are not approaching it from a stealth perspective. If you don’t like stealth gaming, by all means skip this one. But if you enjoy the concept of one person, alone against an army in a hostile environment, Hours of Darkness will give you that fix. If you go for the 100 percent completion, you will have about three to four hours of gameplay content.