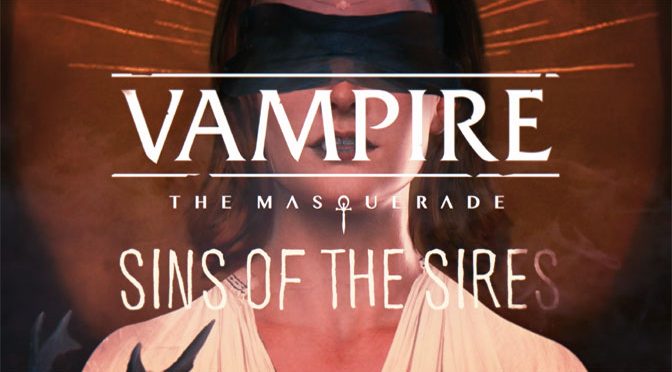 Vampire: The Masquerade
Sins of the Sires

We are still all waiting for a final release date for Vampire: The Masquerade Bloodlines 2, the sequel to the classic (and beloved game) of the same name from back in 2007. It’s been delayed again, although if the developers are taking their time, that might be a good thing. And in the meantime, we are getting a lot of great Vampire: The Masquerade (VTM) content in other forms. We have a reviewer frantically playing the new Swansong adventure game right now, so we should be able to bring you that review very soon. But for today, I am tackling a text-based adventure game in the form of Vampire: The Masquerade Sins of the Sires. 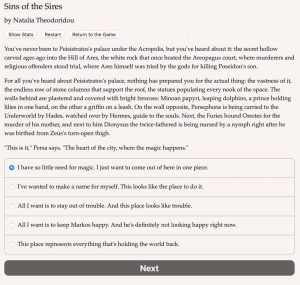 This is yet another of the text adventure games put out by Choice of Games. The last one I looked at was Parliament of Knives, which dove deep into vampire politics up in Canada. But there have been many others in recent years from a variety of publishers. They include both straight text games and graphic novels. Some of  the best that we have reviewed here at GiN include the beautiful graphic novels Coteries of New York and Shadows of New York, and fully text adventure games like the (best of the bunch in my opinion) Night Road interactive novel. There was even Our for Blood, which was unique in that you don’t actually play a vampire, and instead are challenged to survive as a lowly human among all the monsters of the World of Darkness.

On to VTM: Sins of the Sires. This is a fully text-based adventure game put out by Choice of Games. I happen to have gotten a little glimpse behind the curtain as to how the company operates, which is with several different authors working on stories at the same time. That is probably why the stories are so diverse both in their settings and style.

Sins of the Sires is set in Athens, which is a first for the series I believe. The novel does a good job of using historic landmarks to set the mood. And I have little doubt that the architecture and general city layout is authentic. At least it all seemed real to me, although I have never been there.

The story has players taking the role of a young person (you can define if they are male or female or nonbinary) who is also relatively newly turned into a vampire. Your character has a bit of a mix of various vampire traits. You pick them as part of the narrative, not directly like with the pen and paper role playing game. So, you might select a story choice that says that you feel a connection with animals, and the game will assign you points in Animalism. Sins also tells you that you don’t know your heritage or sire, and assigns you to the Caitiff clan by default, basically making you an outcast. Other skills like stealth or fighting are given a percentile value that changes over time in response to your actions in the game. 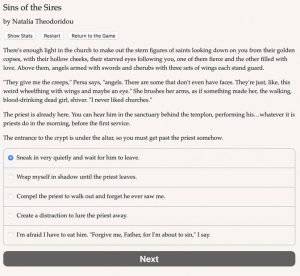 There is little need to keep track of your skills. Unlike games that pull heavily from the core Vampire: The Masquerade RPG, in Sins your skills kind of fade into the narrative. Personally, I much prefer a game like Night Road where players can craft a character and the game actually responds to those choices, and where you really agonize over where to put points to improve your build. I really wish more of these games were like that. Given the popularity of Night Road and the almost universal acceptance in the VTM reader community that Night Road is the best text adventure game, I don’t think I am alone in that way of thinking.

But back to Sins of the Sires. Sins is an interactive novel by Natalia Theodoridou of about 300,000 words, though you wont get to experience all of it in a single playthrough. However, the game is more linear that many I have recently played, so one time through will let you see much of what it has to offer.

The plot is that you are a lowly vampire, not quite a fledgling but far from an experienced undead. As a Caitiff, you get incredibly lucky by being brought to live in the house of an elder vampire who basically adopts you even though you are clanless. Believe it or not, much of the game centers around interacting with your “sister” who is your sire’s actual child (in VTM terms anyway) and who initially resents your presence in their happy home.

Very quickly, events start to overtake you as the elder vampires in Athens go to war. This entangles your adopted sire, and puts you in the thick of events way above your experience and skill level. You must choose who to ally with, who to trust, who to betray and how to survive when much of the world suddenly turns against you. 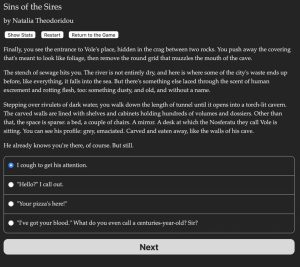 The game actually does a good job of moving between crazy fights for your life and moments that are quieter and much less dangerous. At one point you can even adopt a cat as a ghoul pet by feeding it your blood, granting it special powers in return for loyalty. That was kind of funny, and I don’t remember having any non-human pets in any other VTM game. It was a feature that I really loved. You get to name your cat, and it can pop up at interesting times in the game. It may even help to save your life, so adopt that cat.

While I had fun playing Sins of the Sires, there are several problems. The gameplay side of Sins is a little off the mark, forcing you to make choices that characters probably wouldn’t. For example, early in the game, an ancient vampire offers you a bag of blood. I of course accepted it. First off, you don’t want to piss off an elder, and secondly, what vampire would turn down free blood? But the game read that as a moral choice where I “didn’t want to hurt humans” and forced me to try and find blood bags for the rest of the game instead of feeding properly. That means I couldn’t pick up snacks along the way as the choice to hunt was no longer given. So I was hungry most of the time and not able to use my powers, all because of a poorly forced choice in the first couple chapters.

The game also seems to ignore your vampire powers at key moments. For example, in another playthrough, I got to a point where I knew that a vampire and a ghoul were hunting me, and was given the choice to run, hide or fight. I had points in Obfuscate on that character (meaning I could turn invisible or even fully melt into shadows). So I choose to hide (I also happened to have a high stealth score). But it didn’t matter. Instead of using my powers, my character tried to hide behind some trash, and was immediately spotted, jumped and beat up pretty good. It’s like the game forgets that it gives you vampire powers whenever it’s convenient to advance the plot. 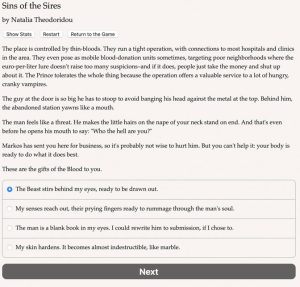 And to make matters worse, sometimes the story jumps around in odd ways that don’t quite make sense. There were times in the game when I really did not know what was happening. At one point everyone in the city was wearing masks and acting crazy to the point that I thought I had somehow entered a dream sequence, but apparently it was really happening, although I still don’t know why.

Finally, the game abruptly finishes in a crazy kind of Deus Ex Machina ending, where you somehow become that god-like focus.

Sins of the Sires is not a bad text adventure, but it’s the weakest of the new crop of VTM games. It has a few technical and story problems, and does not really have much unique to balance out the scale on the other side. Dive into Sins of the Sires if you really need a VTM fix, but if you have not played any of the others mentioned at the beginning of this review, give them a try instead. Night Road is especially good.

Sins of the Sires earns 2.5 out of 5 GiN Gems for being a good, but not quite great, addition to the ever-expanding Vampire: The Masquerade library of content.