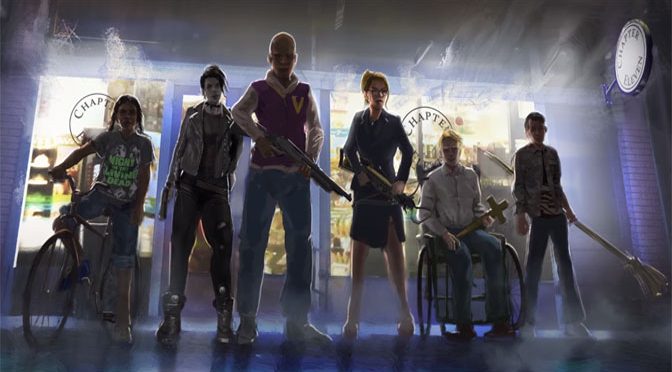 Vampire: The Masquerade
Out For Blood

Like most everyone else with experience either playing the pen and paper Vampire RPG from White Wolf or the still amazing, decades old Vampire: The Masquerade (VTM) RPGs, I have been waiting for VTM Bloodlines 2 with bated breath. It keeps getting pushed back, but that is fine with me. Better to wait and get a solid game than something like what happened with Cyberpunk 2077. But that leaves me with a vampire hunger that needs sated. And no, I don’t have any interest in the concept of a VTM / Call of Duty-style shooter, so I won’t be experimenting much with Blood Hunt. For me, the role-playing aspects of VTM are the most enjoyable, not the hacking and slashing, or the shooting. 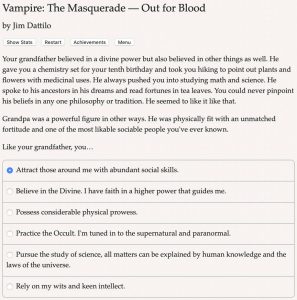 In the meantime I have been having a lot of fun with a whole bunch of graphic and text-based interactive novels set in the World of Darkness from the Vampire: The Masquerade role-playing game. These include the beautiful graphic novels Coteries of New York and Shadows of New York, and fully text adventure games like the (best of the bunch in my opinion) Night Road interactive novel. The Night Road game is so good that I have gone back and played it multiple times, and the developers keep adding more options, clans, vampire powers and even mini-adventures to the core game, which is quite a feat for a text adventure.

So in looking for something similar to Night Road, I stumbled across the recently released Vampire: The Masquerade Out For Blood game. And while it’s not quite a masterpiece like Night Road, it does offer a unique perspective on the World of Darkness, not the least of which is being able to play the entire game without ever becoming a vampire or using any supernatural powers. You are just a normal person who is exposed to vampires for the first time, and you don’t really know what to make of the situation at first.

Building out your character is very similar to how you do it in other VTM games or even the pencil and paper RPG. You spend points and fill in dots for abilities like strength and intelligence and then skills like persuasion, investigation or athletics. When playing the game, if you activate storyteller mode then you can see which abilities and skills are going to be needed to accomplish certain actions or successfully make certain choices. So if you need to leap across a 10-foot pit and your dexterity is only at one dot out of five with no points in athleticism, you probably want to pick a different action, because you are not going to make that jump. 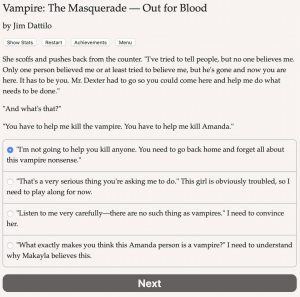 The one odd thing for me in building my Out For Blood character was how weak he was. Playing a lowly human was odd. Even the weakest starting vampire in most of these kinds of games will have multiple dots in abilities and skills. In Out for Blood, you are lucky if you start with two dots in any core ability, maybe three in a single one if you min/max your build a certain way. You can earn experience points to improve things later in the game, but buying up skills after the game begins is terribly expensive compared to other interactive novels I’ve played, so you better like your starting build. Humans are so weak, although that is part of the appeal to Out for Blood.

The plot of the adventure, which is written by Jim Dattilo, is very good. It begins when your somewhat estranged grandfather dies and leaves you his local store in his will, which is located in the small town where you grew up. You have to leave your life in the big city of Chicago and head home to take care of his affairs, and maybe take over or sell the family business depending on how anxious you are to put down roots again. You actually get to determine (and name) what kind of store it is too, which is a nice touch. You can make it something like an occult shop or a used book store or even a high-end designer furniture emporium. The story changes slightly depending on what you choose. 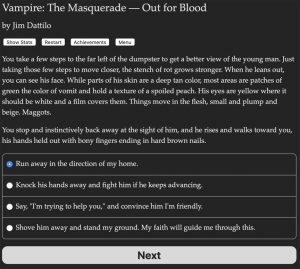 I actually wish that you had more opportunity to work your store, since that also helps to make Out For Blood unique from other VTM titles. In the very beginning of the game you get to do things like stock the shelves and process your grandfather’s back orders to get things rolling again, but you don’t get to go back and do much with it after that. I was really kind of angry because it always said “store shelves are nearly empty” right there on my character sheet, but I couldn’t go and do anything about it for long stretches of time. I also wanted to go back and do more internet marketing after buying up my tech skills, but again, never had the option. Somehow the store makes money anyway, but I kind of wish that they did more with the mini-business simulation mechanic that they introduced.

As you play you will meet childhood friends and other people who live in your small home town now. The game tracks your relationships with many of them, although I found it very easy for my charisma-based character to get everyone I met up to the friend level in very little time. There are also several romance possibilities in the game, and a couple adult scenes (if you build up relationships in that direction) which are a bit more racy than with most other VTM books. After all, you are human in this game, and still interested in those kinds of things. 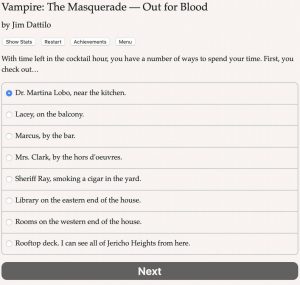 Eventually you will become aware of two factions of vampires that live in the town, an elder and a bunch of thin bloods. Those groups are hell-bent on going to war with one another and you can decide which one to help, or can choose to try and destroy them both. It’s up to you to try and figure out which option is the best for the town, and then investigate and plan for ways to make that happen. Yes, you can actually try and become a vampire in Out for Blood, but it’s near the end of the game and not really a main plot point. Or you can choose to remain human, or pick something in-between. There really is a lot of choice in the endings. Different playthroughs can earn wildly different results.

The other thing of note is that while you are in danger during the game, that the overall mood seems to be a little more lighthearted than others set in the World of Darkness. In my first playthrough, I was able to achieve a very positive, happy ending. And I have to admit that achieving a victory like that in a VTM game did make me smile. 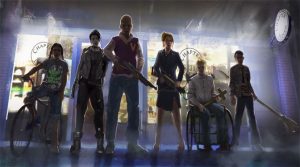 While Out for Blood may not be as epic or as lengthy a game as Night Road, it does present a really nice story from a unique perspective. It’s definitely worth checking out, especially for longtime vampire players who want to see that dark world bathed in a little bit of (gasp) sunlight. And if you are totally new to VTM, then this is actually a really good place to start, because the vampires truly will be mysterious.

In any case, Vampire: The Masquerade Out For Blood is a really nice text adventure game that should appeal to anyone who enjoys a good, interactive story.