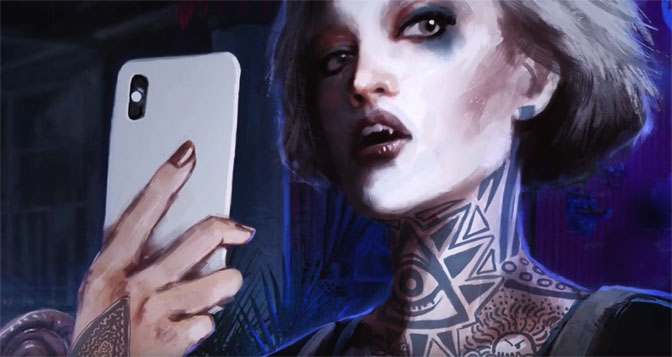 When Vampire The Masquerade: Bloodlines came out way back in 2004, it became an instant classic. Not only did it have an elegant RPG system based on the White Wolf Publishing pen and paper game, but also the atmosphere of a dark world populated by vampires masquerading as humans while instigating nefarious and deadly plots. It was amazing to experience the first time, and countless players have gone back and replayed Bloodlines many times afterward. Bloodlines was extremely addictive, and was one of the first titles I reviewed for GiN that earned a perfect score.

I was sure that Bloodlines, which improved in every way over the previous game, Vampire: The Masquerade – Redemption, was bound for sequel town. I thought we would be playing deep Vampire RPGs for years to come. Sadly, nothing happened, and it’s been 15 years at this point. People kept playing the game, and groups of programmers volunteered to fix many of the annoying bugs in the Bloodlines game over the years. But for whatever reason, no new titles were forthcoming. 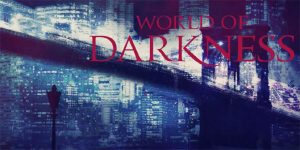 Yes, we now have Bloodlines 2 announced, and it looks pretty good so far. But if the game is halfway as ambitious as the original VTM games, it might be till Christmas next year before we get to sink our teeth into it.

So I was extremely excited to learn about Vampire: The Masquerade Coteries of New York, a fully licensed title that is available to play right now. Coteries of New York is set in modern day in the World of Darkness universe and features the same amazing atmosphere of Bloodlines and the pen and paper RPG. But it’s a narrative experience and an interactive story.

As an interactive story, the plot of the game is probably the most important thing in terms of grading it. Thankfully, Coteries of New York has a very strong story with sufficient twists and turns to keep you guessing, as well as questioning who you can fully trust in this dark world filled with creatures of the night. It makes you want to keep playing just a little bit longer to shed just a little bit more light on what is really happening. 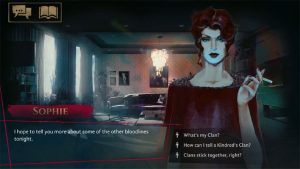 The plot actually kind of follows what happens at first in Bloodlines, where you begin the game as a human and get embraced against your will. Your sire disappears, and soon afterwards you are waylaid and brought before the council for trial by the Sheriff of New York, the vampire prince’s chief enforcer. You survive that ordeal, but then must learn how to endure as a fledgling vampire playing an ancient game whose rules are both cruel and alien to you. Your only hope, as your newly adopted sire informs you, is to form a coterie of other young vampires who you can both run with and trust to watch your back.

The gameplay in Coteries of New York is basically your struggle to interact with some of those younger, odd vampires of New York, trying to get at least some of them to trust you enough to form a coterie with you. You do that by helping them out on their various missions and plots. Of course you will also be running errands for your adopted sire and occasionally other older vampires, which is pretty much everyone other than you.

Talking with others, humans or vampires, normally puts a picture of them on your screen and then gives you dialog choices for your personal responses. You take actions the same way, by selecting your choice from the two or three options given. You can use your vampire skills, which come right from the role-playing game, by selecting a choice with the Camarilla symbol beside it, which is very useful for say, dominating a human or speeding up your reflexes in a fight. Using powers costs blood, and when you start getting dry a bloody outline will appear on the screen. Thankfully, other than with one character who needs specific blood, feeding is as easy as making a selection with the little fang symbol beside it and stealthily snacking on a nearby human. 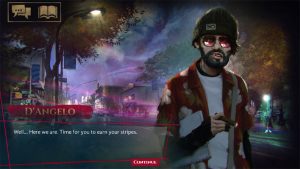 The biggest challenge is that you are only active at night, and in game terms that is two moves. There is a moon clock that shows what part of the night you are in. Whenever you choose to visit one of the other vampires, perform a task or errand, or go on a mission, the moon will advance halfway across the night sky. When you make your second move, it will move again to dawn (the sun comes up opposite it) and you need to rest at your haven. It doesn’t matter if your move consists of a five minute conversation or a long, drawn out mission. You get two moves per night. The catch is that you won’t be able to do everything in a single playthrough before the end of the game sequence triggers and you have to follow the final chapter to its end. If you pick about two potential companions and ignore the others, you should have enough time to max out their questlines and also do some side missions. 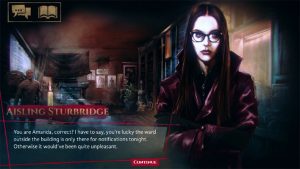 Graphically, the game looks great. Everything is expertly hand-drawn by brilliant artists, and you can select an option to make the backgrounds move slightly, adding special effects like lightning bolts in the night sky, rolling water, moving traffic lights and things like that to spice things up even more. Some of the locations in Coteries of New York look suspiciously like places from Bloodlines, which was a nice touch. And yes, I know Bloodlines was set in California and Coteries takes place in New York, but trust me when I say that the influences are obvious at times. 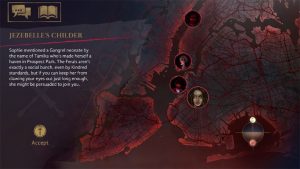 The sound was not nearly as mesmerizing as the graphics. There are different tracks that play while you are visiting places around New York, but they are fairly generic. And there is sadly no voice work, so you will be reading a lot of text. Adding voice actors might have, if they did a good job, added to the already mesmerizing atmosphere. But that would make Coteries of New York a much bigger and more expensive project. So you will just need to imagine what each of the characters sound like in your head. I didn’t have any problem doing that. 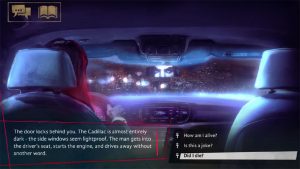 The game is not perfect. I found more than a few spelling and grammar errors. And the character selection is oddly limited in what is basically a text-based adventure game. One would think that more than three characters, or at least a male/female choice for each one would be offered. You only get three, and there are no customization options. So for example, if you want to play as a Ventrue clan vampire, you need to select the female character. Also, some of the typical player favorites, like the crazy Malkavian clan, are not playable, though they are thankfully in the game. 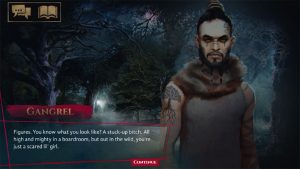 Finally, while I loved the amount of choice offered in the main game, the ending sequence seemed more or less on rails. Things happen, including a major event that I really wanted to try and stop, but couldn’t. Getting jerked away from being an active participant shaping the story to basically an observer with no real choices in the final ten minutes (and then not liking the ending) was disappointing. It keeps Coteries just shy of becoming a true interactive masterpiece. 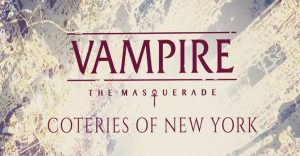 Even with a questionable ending sequence, Vampire: The Masquerade Coteries of New York is one of the best narrative adventures that I’ve ever played. The developers at Draw Distance used the World of Darkness license to great effect, bringing that universe to stunning unlife and letting players walk through its dark and twisted streets, and even darker and more twisted plots, once more. The game will satisfy your hunger for this bloody universe, and with expansions already planned, will hopefully give us a chance to take additional bites before another 15 years has passed.