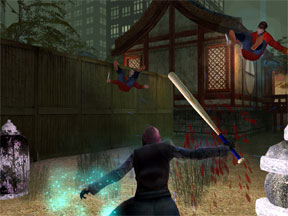 Very few if any games leave me thinking "man, I can’t be playing this before bed cause I will never sleep" but Vampire The Masquerade Bloodlines did just that. The game is haunting and disturbing, and really stretches the RPG genre.

Those who adore RPGs like me probably know that Bloodlines is the sequel to Redemption, another vampire title that used the White Wolf role-playing system. The system really lets you customize your character without being too stat-heavy. Basically you just buy points to fill in various circles to improve your character. As you fill in your main stats, your related sub-stats also fill in. Like when you increase your perception your investigation and firearms skills go up. You can directly buy up say, your hacking skill too, and it costs less than trying to buy up your main stats and letting the effects trickle down. In this way you can really customize your character however you like from an intimidating brawler to a stealthy creature of the night.

Where Redemption started in medieval times and gave some insight to the history of vampires, Bloodlines begins in modern day. We learned in the movie Lost Boys that Santa Monica was the vampire capital of the world. But Santa Monica shares time here with Hollywood, Chinatown and downtown LA. You play a new character and don’t have to know about the first game to enjoy this one.

You are a newly embraced vampire. As you were created illegally according to vampire society, you are set to be killed at the beginning of the game. But, in a political move, the head vampire decides instead to kill your sire and give you a chance to prove yourself on a suicide mission. Assuming you make it back in one piece, you slowly begin to climb the ranks of vampire society.

Your primary concern as a vampire is the maintaining of "The Masquerade" which is a set of rules that govern vampire society. The reason for these rules is that the existence of vampires must remain a secret from mortals. If mortals ever turned against vampires, the vampires would be outnumbered 100,000 to one and would likely be wiped out. So vampires like to remain hidden creatures of storybook fantasies.

That means you can’t just jump out and start sucking blood from someone in downtown LA. Besides bringing human law enforcement down on you, this would break the masquerade and bring forth vampire enforcers. If you break the rules five times, the vampires will call a blood hunt on you, and you will be killed.

So you have to maintain the masquerade, but you also have to satisfy the elder vampires by going on missions for them. And since every vampire is an elder to you, it means you are going to be busy. Luckily you have vampire powers to help make your missions a bit easier. Though the powers vary from clan to clan, you might have razor sharp claws, the ability to run with superhuman speed, to entrance mortals, turn invisible or stun your opponents. Using a power requires that you spend some of your blood, which means you will need to refill it later.

The various cities you visit are all expertly rendered in 3D. The environments are every bit as good as almost any shooter you will play, which is good since the entire game is played in first person. And since my character was good with firearms, it was nice to have a good shooter interface.

The excellent graphics is one of the reasons the game is so disturbing. You see I have been to LA quite a few times and Santa Monica too, and I don’t think it was this dark a place. They even made the Santa Monica pier scary here. But I did not travel around too much at night, so who knows.

In the course of the game you will meet a murderer who imprisons people in the basement of his shop and slowly cuts them to pieces, a sect of vampires that practice fleshcrafting where they carve their victims into monstrous mutations, a supposedly good vampire with his own unholy insane asylum, a snuff film studio, and back alley sex shops that cater to any perversion. The game is rated M for a reason. Nobody under 17 should play this game. In fact, I know the ESRB ratings systems have come under fire recently for being too lenient. Truth be told, I think this should have been an Adults Only rated title.

One of the reasons I liked the game so much is because within this dark world you are forced to try to hold onto your humanity. If a vampire ever loses out to the beast inside, they are lost – and you will lose the game. So you must desperately try to help people so you can remember that good person you once were before you became a creature of the night. The results of losing humanity are all around you, so at least you will be well-motivated. In an ironic twist, my vampire had more humanity than many of the mortals around him.

The overall plot of the game involves feuding vampire clans and sects, and of course it is up to you to save both vampires and mortals in the end. There is a lot of gameplay packed into this title, perhaps 25 hours of play if you do all the side quests including a cool one where you cultivate your own human ghoul – a companion that is devoutly loyal to you and kept forever young by feeding on your vampire blood.

It’s rare to say a game sucks, and then give it a good rating, but since we are talking about vampires it’s a pun I can afford to make. I took a little bit from the gameplay score because the load times between levels is atrocious – sometimes lasting as much as a minute or more – even on a high end system. Even so, it earns a full 5 GiN Gems for showing us a dark and foreboding world, and then challenging you to survive it with your humanity intact. If you like in-depth role-playing in an adult world with plenty of moral dilemmas, then Vampire is the game for you.