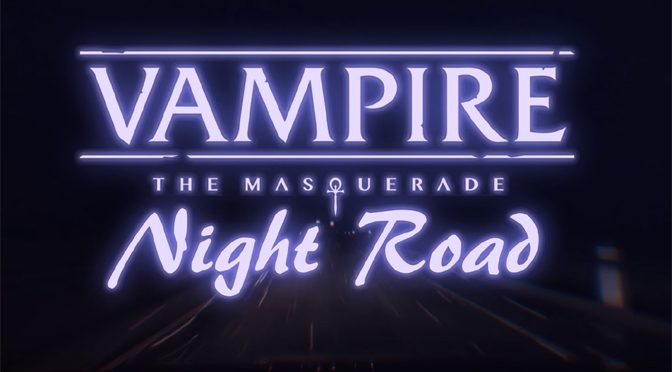 Another week brings us yet another Vampire The Masquerade (VTM) title. And that is a sentence that I didn’t think I would ever write. Look at it like this, the ultimate vampire RPG, Bloodlines was released back in 2004 by Troika Games. It was so popular that it’s still selling well (for $20) all these years later on Steam. But until they announced a sequel in Bloodlines 2, which is due out sometime next year, there was almost no Vampire The Masquerade content. It was a sad time be a lover all things White Wolf, the original makers of the pen and paper RPG. 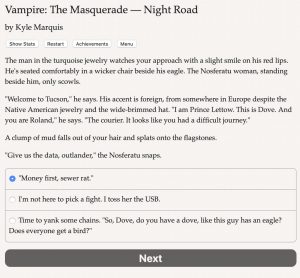 And then it was like the dam broke. Vampire: The Masquerade Coteries of New York was released as a graphic novel type game a few months ago. It proved to be so popular that developer Draw Distance put out a sequel, Vampire: The Masquerade Shadows of New York that we reviewed just the other week. Maybe because Paradox Interactive bought all of the Vampire The Masquerade rights and content, the game system finally has an owner who knows videogames and how to support them. This can only be a good thing for VTM lovers like myself.

So this week we are taking a look at Vampire the Masquerade: Night Road, which popped up on Steam seemingly out of nowhere. I stumbled across it while looking up some information for my Shadows of New York review. Night Road is developed by the Choice of Games studio, who are known for their choose-your-own-adventure type games for mobile platforms, often with romantic overtones. Night Road is a text adventure for sure, though they do have a nice graphical trailer for the game. But there is almost no romance here. It’s all perfectly recreated World of Darkness content.

Night Road is pretty amazing in terms of sticking to the rules set out in the Vampire The Masquerade pen and paper game. You even get a character sheet with those little dots that you fill in as your character’s skills improve and you spend your experience points. All of the rules for hunger, combat, damage, using disciplines and things like that are in the game. You can even activate storyteller mode which shows you the checks you will have to make to perform certain actions, as if you were sitting around a table with friends playing a role-playing game (you know, like when we used to be able to do stuff like that). 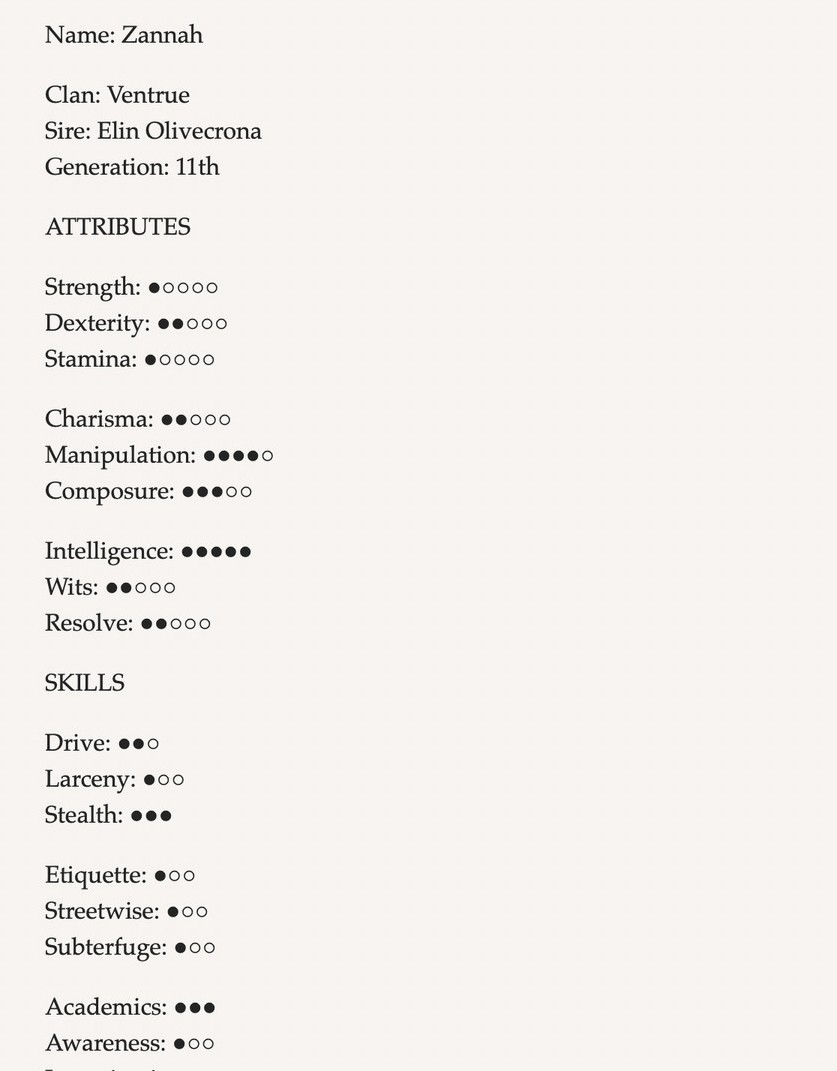 So for example, you might have a choice of convincing a guard to let you pass a checkpoint without a proper badge, or trying to hack a secure elevator keypad nearby. With storyteller mode active, you would see that the first action will require both a Charisma and a Persuasion check, while the second will rely on your Intelligence and Technology skills. So you can look at your character sheet and decide which method has the better chance of success. You can also use special items that you have collected along the way, like an infiltration kit, or vampire powers like Presence to help you along. For anyone who has played VTM games before, Night Road will be easy to pick up and play. The game does explain everything if you don’t know or cant remember what, for example, various powers like Celerity (unnatural quickness) does, or if you need to know the system for calculating hunger and willpower.

There is even a tutorial of sorts where you play this little scenario at the start of the game and Night Road will assign ability points based on your actions, though you still get to choose your vampire clan. That way you get play a character who matches the way you want to play the game. Personally, I wish that Night Road had an advanced mode where players could just spec out a character, but I’ve played a lot of Vampire in the past so it’s almost second nature for me. You can kind of do that in Night Road, but only if you pick Caitiff as your clan (basically a clanless vampire). If you do, then you can put your points in however you like, which I very much enjoyed because it made for a great character that fit my play style. It costs an extra 99 cents to add this feature as its technically a DLC, but for me that is more than worth it – though it probably should just be part of the core game. 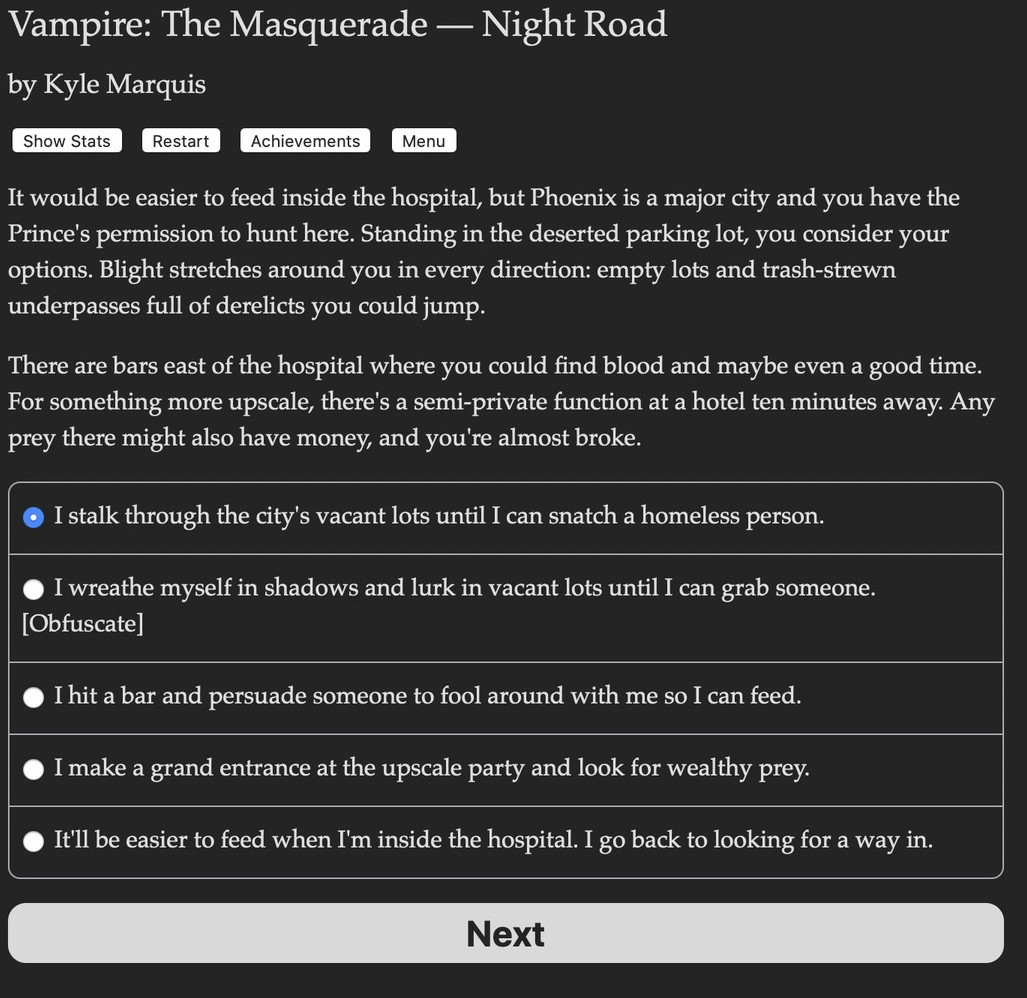 Night Road presents a very tight and believable story written by Kyle Marquis. I am not familiar with the author, but I can tell you that he is really good. It was very easy to drop into the story, picture everything that was happening around me, and plot about what my character would do in order to escape the inevitable trouble that they constantly found themselves in at every turn on the road.

I also like Night Road because unlike most VTM games these days that focus on politics, this one was more about simply surviving the machinations and plots of all the elder vampires that control your world. It’s also set during an interesting time where the government-backed second inquisition has wiped out a lot of vampires, and is actively hunting the rest. So danger can come from both being a disposable pawn at the hands of the undead monsters who serve as your bosses, and also from government agents specially trained to sniff you out and take you down. 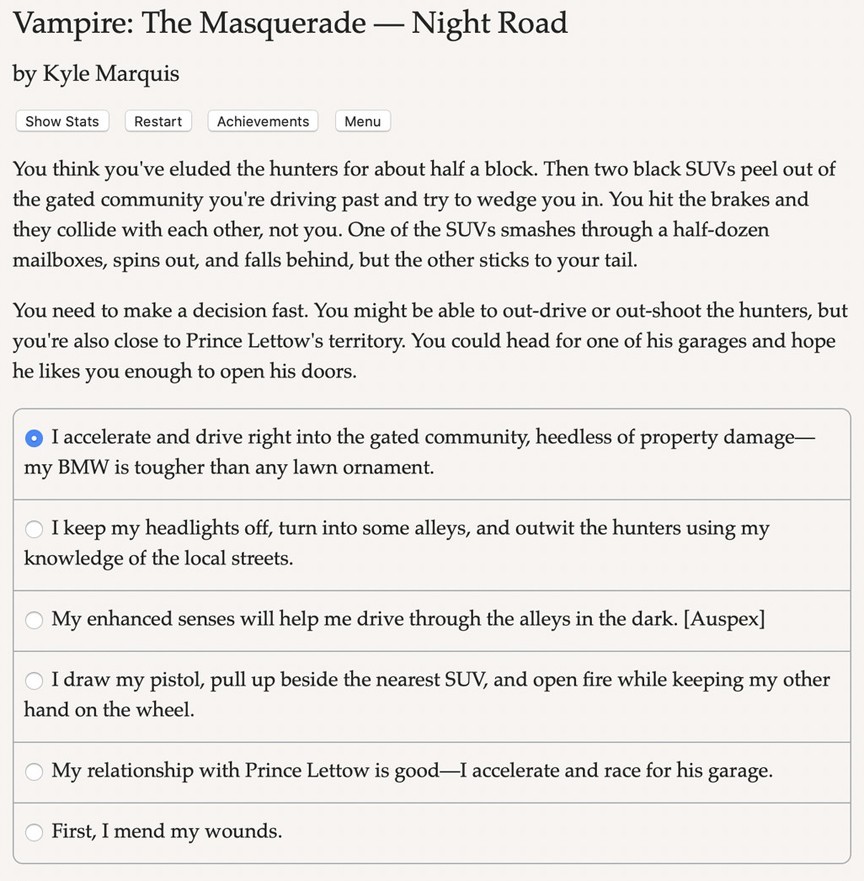 You play a unique role in vampire society in Night Road, a courier who drives between cities with messages, packages and missives, keeping the lines of communication open between vampire princes and other elites, yet never even approaching one in stature yourself. In an era where the government is trying to hunt your kind down, sneaker mail (or the vehicular equivalent) represents an unhackable method of communication, and provides you with a stable job. Just be sure to find a safe place before the sun rises each morning or it will be your last ride.

I had a lot of fun with Night Road. Anyone who enjoys a great story that actually has a good game mechanic underneath will like Night Road. And if you happen to be a Vampire The Masquerade fan, then Night Road is immediately upgraded to a must-have title. It’s really the cream of the crop in terms of modern VTM titles while we await the (hopefully) masterpiece that is Bloodlines 2.