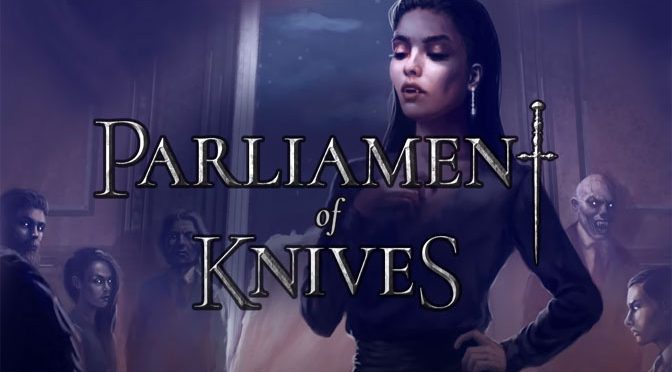 Vampire: The Masquerade —
Parliament of Knives

Since you all were here last time for a Vampire the Masquerade game review, not a lot has changed in terms of waiting for what will hopefully be the ultimate VTM title, Vampire: The Masquerade Bloodlines 2, the sequel to the classic (and beloved game) of the same name from back in 2007. The developers are taking their time, and that is just fine with me. I would rather they take their time and release a game of the quality that we all expect.

In the meantime, I have been having a lot of fun with a whole bunch of graphic and text-based interactive novels set in the World of Darkness from the Vampire: The Masquerade role-playing game. These include the beautiful graphic novels Coteries of New York and Shadows of New York, and fully text adventure games like the (best of the bunch in my opinion) Night Road interactive novel. My most recent review of games in this series was Our for Blood, which is unique in that you don’t actually play a vampire, and it can be challenging to be a lowly human among all the monsters in the World of Darkness. 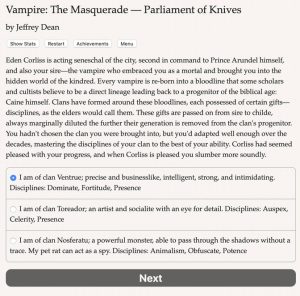 Those of you who love vampires will be happy to know that we are back to being undead once more in Parliament of Knives. You can pick a character from either the Ventrue, Nosferatu or Toreador clans. And you will surely meet other vampires from all different clans and backgrounds as you play. Like most VTM games other than Out for Blood, you exist in a vampire society that hides in the shadows of modern day (hence the Masquerade), and must keep your existence secret from the human hunters of the second inquisition, but also really need to watch your back since your fellow vampires will happily give you final death if it means advancing their own position in some way.

This text-based adventure features over 600,000 words and is written by author Jeffrey Dean. The plot is really interesting, and as the name suggests, has a lot more political intrigue in it than most VTM titles. With Night Road you were mostly concerned with your own survival, but with Parliament of Knives you are actively participating in the politics of your city, which is Ottawa, Canada.

The game begins when the prince of the city turns up missing, and all of the vampires who live there start to smell blood in the water. The loss of a prince, even if they are only missing in action, creates a vast power vacuum that the undead predators of the various vampire clans are only too happy to try and fill. You happen to be the number one assistant to a Ventrue named Eden Corliss, who was second in command to the prince, and also your sire. As you adventure in the game, you will be investigating the mystery of the missing prince, and trying to figure out who or what is involved. 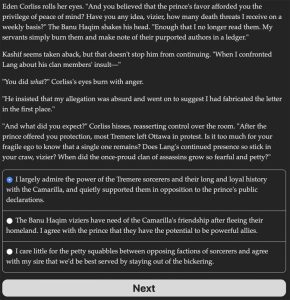 Unlike a typical detective story where you have innocent and guilty people, pretty much everyone you meet in the game is guilty of something. Vampires tend to be schemers by nature, and ultimately only loyal to themselves. It’s even possible that your own sire was involved in the prince’s disappearance. And even if you find out who is responsible, there is nothing saying that you have to be noble and good by trying to bring them to justice. It’s perfectly acceptable to use the chaos to advance your own position, maybe even joining the conspirators. The morality of the undead is quite different from that of the living after all.

One of the really interesting things about Parliament of Knives is that the story seems to have more branching paths than many other VTM text games. At one point, you can even choose to go to one key meeting or another major event, and you can’t do both. This makes Parliament of Knives more repayable than most other VTM games, other than maybe Night Road which is still the most epic in scope (and keeps expanding with new content). 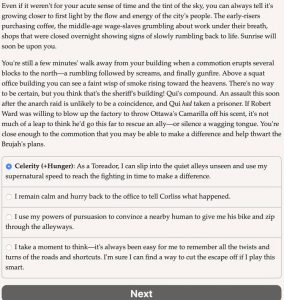 The one thing that I didn’t like about Parliament of Knives is that the game forgoes the typical character creation of almost every other VTM game. In most VTM games you have a character sheet where you spend your experience to buy up skills like firearms, attributes like dexterity or vampire disciplines like Obfuscate. Even Out for Blood did this even though you were not a vampire – you just bought up more mundane skills. I think this lets you really customize your character and identify with them, plus it makes it so that you can play the game more the way you want, deciding between say, a stealthy assassin type character, a charismatic talker who manipulates people into doing their dirty work, or maybe a tank-like bruiser who bashes their way through problems. In Parliament of Knives, you are simply shown basic skills represented as a percentage which are automatically updated as you play. 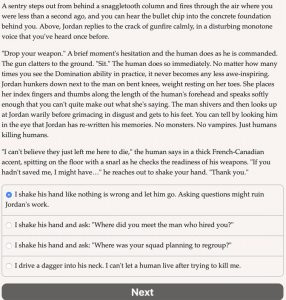 There are a few places where you can choose to specifically increase your skills, mostly in dream sequences or flashbacks, but even then, it only adds a few percent to the skills or attributes you choose. Your vampire disciplines aren’t even listed on your character! They show up as choices in parts of the story where you can use them, but there are no power levels or anything like that, so I never knew how good my character was with a particular discipline. It looks like the game just grants you a success if you choose to use a discipline, but again, what else could they do since you can’t actively manipulate your disciplines (and you can’t learn new ones either)?

This odd choice makes Parliament of Knives more of an interactive story and less of a true VTM game. On the positive side, this makes it more accessible for casual players because they don’t have to worry about managing a character sheet or building out their character a certain way. But for those of us who really enjoy VTM titles and love the world and its atmosphere, this is kind of a big letdown. 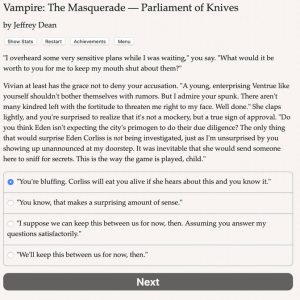 Overall, Parliament of Knives provides a good story that focuses on the political side of being a vampire in the modern world. Think of it as a true storybook instead of an interactive game, but it’s fun to play (read?) nonetheless. It’s so amazing that we are getting so many of these VTM stories after having nothing for so long, and Parliament of Knives definitely belongs with the others in this fine group of vampire tales.

2 thoughts on “Vampire Politics is Murder in Parliament of Knives”