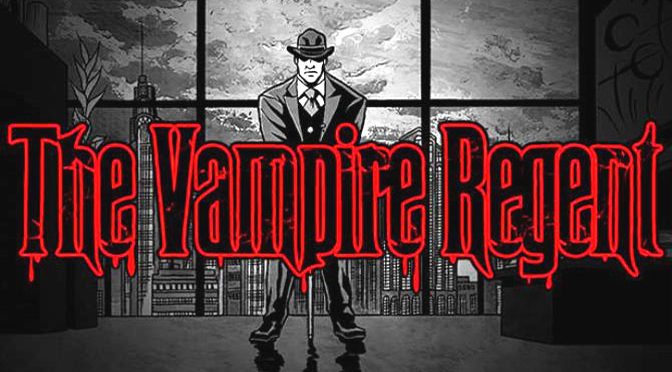 Yes, we are all still waiting for Vampire: The Masquerade: Bloodlines 2, and it seems like we might be waiting for a while. Thankfully, there are quite a few vampire-themed adventures, graphic novels and story-based adventures for us to enjoy in the meantime.

The most recent one I reviewed was Parliament of Knives, which delved heavily into vampire politics of the most well-known vampire world, Vampire the Masquerade’s World of Darkness. But there have been many others over the past year or so. These include the beautiful graphic novels Coteries of New York and Shadows of New York, and fully text adventure games like the (best of the bunch in my opinion) Night Road interactive novel. There have even been titles like Our for Blood which involved vampires, but which did not have us playing an undead. So, there are a lot of great choices, which is why I was so excited to find The Vampire Regent on Steam. 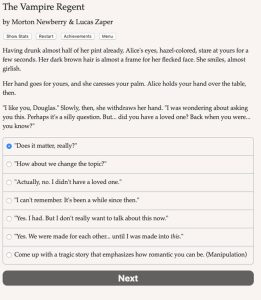 The Vampire Regent is a text adventure novel with 460,000 words of total content. It’s written by Morton Newberry and Lucas Zaper, and they did a really good job of weaving together a coherent and interesting story. And unlike every single other game like this that I have played, The Vampire Regent features randomized encounters, so every playthrough of the game is different. It works by letting the player choose what activity they want to participate in every night, from playing poker with other vampires to heading out to a nightclub to try and find some special company and a dinner. The actual events are randomly presented from a fairly large pool, so you probably wont experience them all on a single play through. That is a really nice touch actually, because it means that the story is not linear, other than a few key scenarios along the way that advance the main plot. 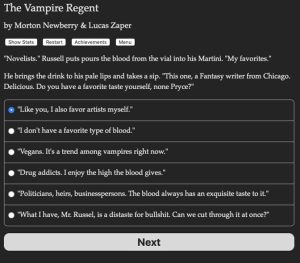 The other thing that is really surprising is that the authors clearly did not have the VTM license. So you won’t find any Ventrue, Nosferatu or Toreadors running around. What Newberry and Zaper did instead was to create their own version of the World of Darkness, only without any of the names or terminology that we have come to expect. You are a Regent, which is basically a Prince of a city. There is also a Masquerade, but its called the Brume. And the four possible clans that you can play are also previously unknown. If you are curious, they include the shapeshifting Balkanics, the future-seeing Aznuits, the blood-controlling Neshmaals, and the mesmerizing Merovingians. It’s pretty easy to map them back to VTM clans too. For example, Merovingians are basically Ventrue. 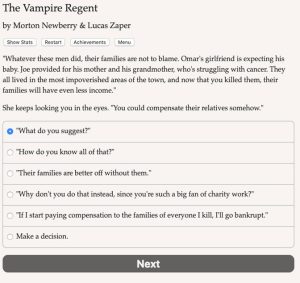 While it initially seems like a bit of a letdown for the novel to not have VTM terminology (I had to look up terms in the online glossary quite a lot), there is one big advantage to being separated from the World of Darkness. The authors are not bound by canon. In the story you play a rather new (read weak) ruler, and in VTM almost all of the princes are incredibly powerful, older vampires, even in smaller cities. The story provides a plausible explanation why your sire helped you to become a regent and then left you alone to control the city, even though this would never work in a true VTM setting. 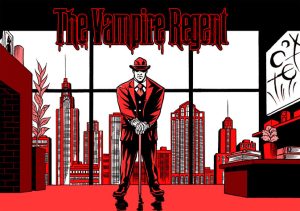 Once you get past the fact that you are in a sort of parallel VTM world, the game itself is really well presented. The story is exciting, and the randomized scenarios means you never know what you are going to get into. You might expect a casual night playing poker, and end up in a wild adventure doing something completely different. In fact, the range of interesting things that you end up doing in the game is really refreshing. Yes, there is an overall story involving hunters moving in on your city, but there are huge gaps of time where the main plot does not advance and you can go on nightly adventures instead at a rate of one per night. Because of that, The Vampire Regent is actually almost like a series of exciting mini-adventures strung together in a mostly believable way. 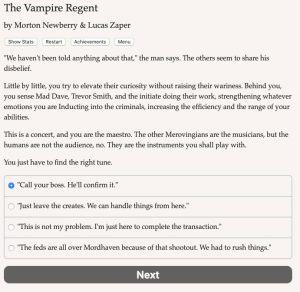 Even without the VTM or World of Darkness name, The Vampire Regent provides both an interesting story and an exciting text adventure game where your choices really do matter. Some might argue that it’s a better game because it’s free from the official VTM canon, but it’s a fun and somewhat repayable experience in any case. And for less than $8 on Steam, you really can’t beat the value that it offers.

The Vampire Regent is a worthy title for vampire fiction lovers to sink their teeth into. And with multiple clans, choices and randomized scenarios, players may just find themselves enjoying more than one bite, like any undead monster, regardless of which world or storybook holds their backstory.