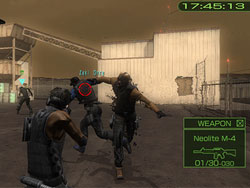 (and so does a lot of this game)

The back of the box starts with "A city soaked in darkness, rain and terror." Continuing down "Identify. Eliminate. Survive. Nightwalkers have evolved from Vampires and are multiplying at an alarming rate. Unknown to all but a few, their population will soon surpass humans. As a member of a black ops elimination squad, you must use stealth, strategic thinking and advanced weaponry to take out the Elite Nightwalker leaders before they overtake human kind. Luckily it’s raining heavily, which dampens the Nightwalkers’ senses to give you a fighting chance!" Sounds like fun, right?

Well sadly the best part of Vampire Rain is the box. Including the best looking vampire I saw – on the front cover.

I enjoy stealth games and figuring out how to sneak by the bad guys or in this case Nightwalkers. And for the first few missions as I scaled building and peeked around corners trying to make sure the coast was clear, I found myself really getting into this game.

Annoyingly the guns I was issued were totally useless against Nightwalkers. Yes a 15 round from a vamp killing M16 = 1/3 hit point loss and me DOA. I thought the box said advanced weaponry?

The only way I found to kill them at that point was in the cut scenes. That is until I found a sniper rifle lying on top of a box in an alley way, you know where all good sniper rifles are found.

One head shot and one dead Nightwalker. I saved a girl who was about to become food and I counted myself super lucky as I still had a bullet left (yes they only gave me two).

Unfortunately for me that was not the one and only possible route to my objective. So I found another spot that seemed to be right and I used my last bullet to take out another Nightwalker. Sadly that was not the right way either. But the red objective dot was so close I protested!

I was walking around looking everywhere, but ignoring an alley that looked fenced off. Eventually I even walked down the alley and low and behold a cut scene where the gate opens and my team mates walk thru is triggered.

If that had been where the objective dot was located I would have been far happier. Maybe this was intuitive to everyone else in the world but me, but I think not. Yet sadly I continued to play, as I kept thinking it had to get better.

It was during the missions where I was actually issued a sniper rifle, yes even though I found one, I did not get it on the next mission, or later where I got my first UV Knife that I begin to really ask myself if the game was truly ever going to get better.

Using the sniper rifle was like shooting fish in a barrel. The only hard part was finding the Vamps, excuse me Nightwalkers, were located. Once you found them, they would just stand there. Even after you shoot one right in front of another one, the other would just stand there like nothing was wrong. And sneaking up and sticking a UV knife in a Nightwalker’s back is just stupid in my book.

In Vampire Rain you play Lloyd, the only member of the team who has any experience with Nightwalkers. He survived an attack on the CDC, but I recommend reading about his past in the manual, it’s a better read than listening to the horrid dialogue as the team members talk amongst themselves.

As you sneak around the city as Lloyd, you can identify humans and nightwalkers using Necrovision. This basically shows humans as green and Vamps as red shapes. The main problem with Necrovision and night vision is that they only last a few seconds. I can see that Necrovision might for some reason suck down the batteries, but how do you explain night vision sucking down the batteries when our troops use it for extend periods of time in Iraq? I am sure it lasts for more than 10 seconds before shutting off!

On the positive side once you id them, nightwalkers show up on the in-game radar screen including the direction they are looking. Next question, if it can do that, why can’t if detect them at all before you id them?

By this point I began to think less than wonderful thoughts about the game, and thus I was not further disappointed by the multiplayer options which include Deathmatch, Team Deathmatch, and Capture the Flame (not a typo). Besides the same old offering there is a glimmer of hope in the new Death or Nightwalker option, in which you can become basically invincible as a Nightwalker yourself.

Overall this is a game with a lot of promise that just did not live up to my expectations as a good stealth game or even a good vampire game.

So as you examine my ratings, why did it score just below average you ask? Well, to be perfectly honest, overall for a little while, despite all the games failings, I had fun. And that is why I play video games.