With my deep love for both adventure titles and games with horror elements, I was immediately drawn to The Medium, a game which was created specifically for the hardware of the new Xbox Series X console or high-end PCs. The game was originally announced for the PlayStation 3, Wii U and Xbox One back in 2012, but its ambitions far outweighed the hardware available at the time. So it was delayed until the hardware could catch up, which it finally has with the release of the newest console. You can also get The Medium for the PC through Steam or GoG, but you will need very high-end gear to run it properly. 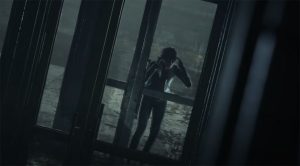 I think the delay was a good thing for more than just waiting for better hardware. The Medium was created by developer Bloober Team, and over the years they have perfected horror titles. You can see the improvement in their skills over time in games like Observer, Blair Witch, and the Layers of Fear series. They started out making what was basically really good walking simulations, and slowly figured out how to layer more and more gameplay elements over top of that without turning their games into some kind of a horror shooter like The Evil Within. There is nothing wrong with games like Evil Within, but running and gunning is not what Bloober Team is about.

True to form, The Medium is a true story-based adventure game. It’s more of a slow burn than an action-packed title, where you will be using your wits to solve clever environmental puzzles as you slowly unravel the mystery of the abandoned, and highly haunted, Niwa hotel. The atmosphere is maximum creepy, and while there are a few jump scares here and there, the true horror of the game comes as you slowly learn about the game’s world, what happened in the past, and the real dangers lurking in the shadows that you will ultimately need to try and defeat. 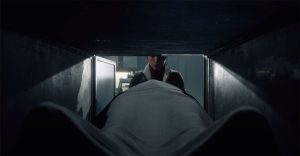 The game follows a young girl named Marianne who has the ability to talk with dead people, and she gets a lot of practice working in a funeral home. Most of the time she uses this power to help sprits pass on to the next world, something she says she has done hundreds of times. Near the beginning of the game, she has to do this for someone she loves, her adopted father, and we get to see just how unsettling this experience is, which explains why Marianne is a little bit on the weird side. The game shows this process by entering a split screen, where one side is our reality and the other is the spirit world. On the living side of the split screen, it looks like Marianne is talking with herself and interacting with thin air. But in the spirit world, you can see who she is chatting with and occasionally trying to comfort by, for example, touching their shoulders. It’s a rather unsettling experience the first time it happens, for the player if not Marianne. Although at first the split screen interaction takes place in a cut scene, the game quickly makes this a vital gameplay element. Marianne can be forcibly pulled into the spirt world in places where a lot of traumatic events took place, like the abandoned Niwa hotel where you will spend most of your time investigating. When that happens, she actually exists in both places at the same, and you will be playing in split-screen with two versions of Marianne moving more or less in sync. 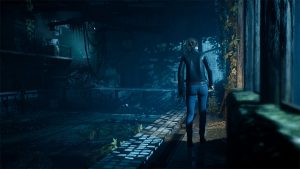 However, when you are in that split screen state, Marianne is bound by the rules of both realities at the same time. What that means is that, for example, if there is a locked door in the physical world, then Marianne won’t be able to pass through that area in the spirit world either, even if it’s not blocked on that side. And if there is some barrier or hazard in the spirit world, she will be blocked from moving on in the physical one while she exists in her duality state of being. Also, damage taken in either world is shared, so if you die on one side of reality, you die on both. 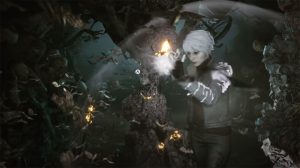 Many of the puzzles involve using the unique elements of one side to help Marianne progress in both. For example, you might need to use spiritual energy, which Marianne can harvest in the spirit world, to charge long dead electronics on the spirit side, which makes them work for a time in the living world. So you are kind of playing yourself and also your ghost, which is pretty amazing.

Marianne can also force an out of body experience, which lets her walk around in the spirit world untethered from her physical body, so you don’t have to move in sync. However, the big catch with that is that it’s temporary, and as time passes her non-synced spirit body begins to dissolve and fade away, first looking like a skeleton and then disappearing all together. If you don’t get back to your body in time, you die. This can add a timed element to puzzles which is exciting. 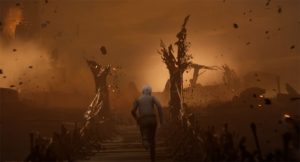 Graphically, the game looks really good, though not photorealistic or anything. The graphics are very much like the Control game in terms of quality, so very nice but not really groundbreaking. I suspect it was the split screen gameplay that the older consoles and lower end PCs could not handle, as opposed to the graphical quality itself. I am guessing that older hardware couldn’t handle rendering two full copies of the game on the same screen and keeping them synced with one another, which delayed The Medium for a decade while systems caught up with the concept.

The music is some of the best I’ve heard in any game. Composers Akira Yamaoka and Arkadiusz Reikowski wrote the soundtrack, and they are both deep veterans in the game industry. Mary Elizabeth McGlynn offers her voice to some of the music, just like she did back in Silent Hill 3. So you know the music is hauntingly beautiful. Grab the soundtrack if you can. In terms of negatives, there are not too many. The game is fairly short. Experienced adventure gamers who instinctively know how to do things like roll dumpsters into place so that they can climb up to higher levels should finish in about 10 hours or less. And there is no traditional combat in the game, so no shooting zombies in the head or attacking hell dogs with lead pipes. If you absolutely need that element in your horror games, then The Medium is probably not for you. I enjoy good gunplay myself, but didn’t miss it at all here. Some might also consider the game a little too slow-paced, or too much like a walking sim, though that would be a little bit of an unfair comparison. 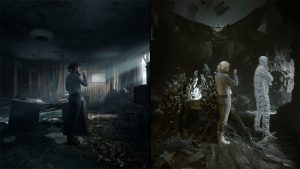 Having played and reviewed some of the best horror games ever made, like Silent Hill 3 way back in 2003 and slightly more modern titles like Resident Evil 4, I can say that The Medium is right up there with the all-time greats. The unique dual screen mechanic is really interesting and becomes a full gameplay element, not just a hardware-pushing gimmick. And the story, characters and the brooding horror environment are really a marvel. Any fan of story-based horror games should give The Medium a try. It’s a perfect nightmare, but in a very good way, and an overall experience that you won’t soon forget.