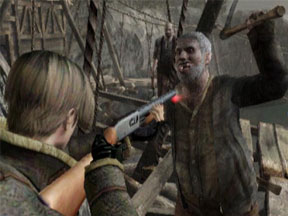 I love horror-type games. Give me something spooky and creepy and I will be up all night with the light dimmed worrying about every little noise and sound effect swirling around my hapless character.

To date, by favorite console-based survival horror game was Silent Hill 3. But I don’t own a GameCube, so while I enjoyed the Resident Evil movies (well, at least the first one) I never really got to play the series. The GameCube has always been kind of the kiddie system if you ask me, and I often wondered why such a horror-type game was exclusive to that platform.

When Resident Evil 4 marched over to the PS2, I jumped at the chance to review the game. Since then, it has bested my love for the Silent Hills (a somewhat weak SH4 did not help any) and become my favorite.

First off, let me say that Resident Evil 4 is a masterpiece. I don’t know if the rest of the series was this good, but RE4 is amazing. It has a great story, plenty of action, some puzzles and even believable characters that you actually care about. Couple that with some interesting mini-games hidden inside the main title and a few you can play after you have solved it, and you have one heck of great value for a PS2 title.

You start of as Leon, a somewhat disgraced secret service agent who’s job it was to protect the president’s daughter Ashley. The problem is, Ashley goes missing before you can take the job, which while better than after, still is a bit of a problem for you. Investigating a rumor that she might have been taken to a remote eastern European country, you go there to see if you can discover anything about her whereabouts. You have a satellite phone to talk with your headquarters, but for the most part are on your own.

You arrive at a small village escorted by two local policemen. The village looks very rundown, but given that this is an Eastern European nation, that is to be expected. You head down a trail and come to a remote cabin on the outskirts of town. So far, so good I am thinking. I’ll just flash my badge and see if any of the locals have seen a young blonde girl in clean clothes wandering around their village.

The first guy you come to is building a fire inside his house, and you show him the picture and ask if he has seen her. He responds by grabbing a rusty hatchet and trying to take your head off. Drawing your gun you put the red dot right on his head and tell him to stop. He does not listen and you end up having to put him down. Then many more town’s people start to attack. They murder the two cops who brought you there and destroy the vehicle. Talk about being alone.

Thus begins the mystery of what the heck is wrong with these people. They bleed red blood when shot and are not zombies, yet they want nothing more than to jab their pitchforks through you or burn you with torches or just strangle you with their bare hands.

So begins your adventure in a setting that would not make any travel guides. The detail of the world is top notch with everything from spiders crawling up walls to human skulls piled up inside an oven to the just bizarre like finding a rotting dinner covered with maggots on a beautiful place setting will put you on edge.

Your main defense against the evil townspeople are your firearms. You can carry as many as you like, though everything has to fit inside an attachT case including all your ammo, which pretty much restricts you to one pistol and perhaps a rifle, SMG or shotgun. You can buy bigger cases as well as upgrade your weapons to add firepower, clip capacity or rate of fire at different points in the game. There is this odd storekeeper that seems to be able to go anywhere in the game who will sell you upgrades or new items. I kind of wish he actually had more to do with the plot of the story, but at least he is there for you pretty much when you need him. You trade gems you find along the way to get money, and a lot of times dead enemies will drop money too or you will find it sitting around in chests.

You can also punch or kick people, but only if you stun them with a bullet first. And you have a trusty knife to use as a last resort.

Without giving away the plot, you eventually find that the people are under an evil influence (big surprise). The enemies get harder and more numerous, but are always or almost always based on humans so again RE4 comes off as a horror game that is at least somewhat believable.

One of the coolest things about the game is that in addition to just shooting and running, you also can manipulate the environment to give yourself tactical advantages. If you climb to the top of a roof, you can spin around and kick the ladder down behind you. This will knock enemies off and damage them, though they will likely try and put the ladder back up to get at you. But then again, there is nothing that says you can’t simply push it back down on them, though I prefer waiting at the top with a loaded shotgun for them to poke their heads up. Good morning to you!

There is blood in the game, and a lot of it. Beside occasionally running across a gruesome murder or two as you travel, your shots will blow heads off, double people over and generally cause a lot of damage. These people may not be zombies, but they sure squish good anyway.

Eventually you find Ashley, but the US can’t seem to successfully get a chopper in to get you out of there, so you end up journeying a good deal with her. She does not use weapons so you have to keep her safe, which can be trying when you are hard pressed with fifty bad guys coming at you and suddenly she gets carried off. (You can get her back if you are quick by shooting the legs out from the abductor, but don’t shoot Ashley or its game over.) She can be useful however, by throwing switches for you while you hold off hoards of bad guys and she even gets her own levels from time to time where you play her.

There are parts in the game where mashing the right keys at the right time is the key to victory, and these parts I hated most. Let’s say a boulder is rolling down at you. The game will flash something like "X and O" at you. If you hit both those keys at the same time, you will roll out of the way. If not, you will die. This is fairly difficult since the keys you have to hit will change and you are not given much time. Thankfully the game normally autosaves right before these parts, so you don’t have to backtrack too far.

There are also cinema-like levels that have some degree of this, but are more combat oriented which are more fun. At one point you are doing a shootout in a runaway mining cart that is so good it’s really the reason we play game like this in the first place.

A word about the difficulty. At first when you only have a pistol and are not completely sure about the interface, it is very hard. I must have died twenty times before I figured out how to get through it. Once you have things down however, the cinematic style gameplay will become more natural, whereupon the difficulty is more like medium.

Should you complete the game, several new games open up. This was big surprise and a lot of fun, since most of these games could really almost stand on their own. One in particular has you playing Ada, a mysterious woman who helps you on the island from time to time even though she is sort of working against you. There are parts in the main game where strange things will happen, like a hoard of villagers being called off of you right before they move in for the kill. In these bonus games you learn why some of these strange things you witness happened, since Ada was the one doing them. That’s pretty darn clever and makes for a nice cherry on top this beautiful game.