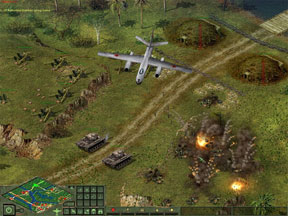 I tried to like this game. I really did. I played and played and tried new things. Never in the history of game reviewing did anyone try harder to make things work out (except for perhaps with Lords of the Realm III). But sometimes you have to throw in the towel and say, "man, this is terrible."

Cuban Missile Crisis starts off good enough. So let’s start with a bit of history to set the mood.

The fall of 1962 was probably about as close as the world has ever come to destroying itself. President John Kennedy demanded that Soviet Leader Nikita Khrushchev remove nuclear missile launching sites from Cuba. The two superpowers flexed their muscles, and kids in school practiced duck and cover drills in case the bomb was dropped. In the end, the Russian bear blinked and the crisis was averted.

But what if the world fell into the abyss of nuclear war instead of carefully backing down from the brink? That is the question the military simulation Cuban Missile Crisis attempts to answer.

In the nightmare scenario presented, almost 90 percent of the population of the US is wiped out. Europe is decimated and Russia is facing a total freeze in the face of a nuclear winter. And still the world keeps fighting. In the game, a conventional war with scattered units trying to survive and eek out an existence for their home nations begins almost as soon as the nuclear fires die down. You missions are mostly to capture supply depots and ammo dumps, since whatever is left is all the world has.

You control one of four factions, each with slightly different post-WWII type units. You can be the U.S. and British team, The U.S.S.R, China or the French and German team, which band together out of a desperate struggle to save their remaining people. Each nation has its own unique problems. China for example has plenty of people, but is short on just about every resource.

There are two components to the game. The first is a tactical map set on a background that looks like 1950’s high technology. This is actually the best part, as you plan where to move your scattered forces.

This is kind of odd to say, but the game would have been so much better if only the tactical map were used. Played like a giant chess game, you have to maneuver your forces to try and take objectives like radar installations to increase your sight range, supply depots so you can fix your tanks and vehicles and oil wells to keep your army rolling along.

Eventually enemies will meet however, and then the game goes into a realtime combat interface. While it works for small engagements, the battles quickly get out of hand to the point that nobody could possibly control their army. You have to manage everything on the battlefield from ammo and fuel replacement for vehicles, to setting up minefields, to repairing bridges and trying to hunt down an enemy that seems to always be one step ahead. This gives the computer a tremendous advantage as it fires unseen artillery at you and gives little chance to return fire while you micromanage everything from your infantry’s preferred stance to what type of rounds to load into your tanks.

It is interesting to note that 1C is a Russian developer. It seems that Russian and German developers making war games put too much emphasis on long range artillery in war games. I had the same problem with developer CDV’s WWII titles. You maneuver your forces around as best you can, but the computer always seems to know where you are and drops copious amount of artillery on your head with pinpoint accuracy. You have almost no chance to retaliate against this before your forces are destroyed. What fun.

And this happens even when you and another army just happen to meet in the field. Taking a fortified location is an impossible nightmare. The enemy facility is going to be ringed with trenches filled with men. If your infantry should come across the trench they are going to get gunned down. If your tanks do, then rockets will streak out and kill them as well. And this is just the outer line of defense. Behind all the trenches are more men, vehicles and fortified bunkers. Even on the easiest setting, I doubt anyone could get a man inside.

And it’s really too bad, because the graphics are quite good with realistic unit and nice explosions. But when all the explosions are they player’s tanks blowing up, it won’t take long before you grow tired. The enemy must have God on their side, because they know everything and always hit too.

If you are looking for a more balanced WWII game of this type, try Soldiers of WWII instead, published by Codemasters and also developed by 1C. At least in that game there is a sense of balance where difficult campaigns can be overcome with dogged persistence, or at least a lot of saving and loading. Also, Soldiers had some levels where the player had very few units, like one tank perhaps. Levels like that are more suited to this type of interface.

In Cuban Missile Crisis, even my endless tries to do anything worthwhile with my forces were ultimately fruitless. I don’t even want to imagine what the harder difficulty levels are like, unless the computer just says "you lose" every time you try to play a battle. But then again, that is pretty much what happened to me on the easy levels, minus a little flailing around.

While an interesting concept, the intense level of detail (every unit in the world’s armies has at least six or eight paragraphs describing its history and capabilities) seems more suited to thinking turn-based players who, like me, will be quickly overwhelmed when bullets start flying. At $30 it makes for a good history lesson, but a fairly poor RTS experience.