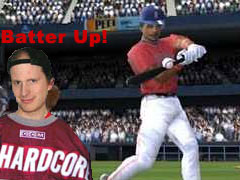 One philosophy that I have always believed in is, "complain, and ye shall receive." After both Chella and I wrote commentaries complaining about the dearth of good Xbox 360 titles coming out, the new titles arrived.

A few weeks ago I mentioned that I would be waiting for the release of Fight Night Round 3, and I am pleased to say that I am not disappointed with the final product at all. Whenever you have a game whose visuals actually overpower the need to have stamina meters (the facial/body reactions are meters in themselves), you know that you have definitely gone next gen.

It gets even better. Just today, the long awaited Ghost Recon: Advanced Warfighter was released to the public. Now I have not had the chance to play the game since I am currently out of town without my 360, but so far the game has warranted rave reviews, averaging 93% on the Gamerankings scale. Even Gamespot gave it a 9.2, but then again, it wasn't "Mr. 6.2" Geoff Gerstmann reviewing it. And in the next few weeks, the release schedule looks robust, including The Outfit next week, then Elder Scrolls IV: Oblivion, and in April comes both Top Spin 2 and Major League Baseball 2K6.

However in terms of MLB 2K6, I might be having second thoughts about it. As I mentioned in the past, I was not happy about 2K acquiring the exclusive third party rights to future MLB titles. Sure I know I'll be considered a hypocrite for backing up EA getting exclusive NFL rights, but there is a reason for this.

Last year, I was not pleased with MLB 2K5 on the Xbox. I found all the pitching systems to be way too easy, no matter how fast I was able to set them. But nothing hurt me more than a nasty bug that occurred every time I got someone on base. When the next batter went up to the plate, the first pitch was ALWAYS a wild pitch. Despite being only $20, the game didn't win my affection, and I ended up going with EA's MVP Baseball.

Now MVP baseball gave me fits originally because of its strict batting system. At first I found it very difficult to get even singles, let alone home runs. But eventually I was able to get a hang of the batting system, and in the end it felt more natural. Granted it was still very difficult for me to hit home runs, but in the end the game felt real to me, and as a baseball purist, that was a must for me.

But thanks to the 2K/MLB exclusivity deal, I was out of luck this year. MVP ended up being a college baseball franchise, and with the exception of football, I don't really care much for college sports. So I thought my only option was to wait until April 10th for MLB 2K6 to come out on the 360. Considering the season actually starts a week before the game is released, this is inexcusable.

It is even more inexcusable now that not only are we dealing with Spring Training, but also the World Baseball Classic. While some teams like the New York Greedies, errrrrrr, I mean Yankees, voiced their opinion over the tournament, even posting a sign at Legends Field complete with bad spelling, (New York Yankess? Priceless!) I welcome the idea.

I do admit that this is being done in retaliation to baseball being taken out of the Olympics after 2008, but it is a novel approach, but what really impressed me the most so far is the fact that the US team, consisting mostly of Yankees players such as Derek Jeter, Pay-Rod, and traitorous Johnny Damon (who looks like a complete wimp now that he's shaved his grill,) were beaten today 8-6 by an impressive Canadian team.

I am backing up Team Canada because one of my favorite Pirates, Jason Bay, is their team captain. But it was the work of a Red Sox farm player, Adam Stern, that really impressed me, including several defense wonders and an inside the park home run. Needless to say the World Baseball Classic has rekindled my interest in baseball, but I still couldn't wait for MLB 2K6 to come out.

However my relief came from an unusual source. After reading good reviews for MLB 06: The Show for both PS2 and PSP, I decided to give the PSP version a shot. Much to my surprise, I was rewarded with a very deep baseball simulation for such a small system. The gameplay is up to the level I experienced in the past from High Heat and EA's MVP 2005, and since it was on the PSP I could even be able to work on my franchise while at the office. My only concern is there seem to be a bit too many wild pitches, but nowhere near as bad as MLB 2K5, and I am even able to download my Pirates headlines onto my PSP to read offline.

I might still look into MLB 2K6, just to see how the game will look on the 360, but in the meantime, I'll stick with PSP baseball.