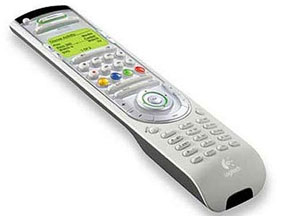 As one of the lucky ones to obtain the first batch of Xbox 360s, and in particular a Premium Package, I was rewarded with a limited edition Media Center remote. While it was practical for watching DVDs on my 360, it was still just another remote to add to my stockpile.

I didn’t need to juggle another remote. I already had one for my HDTV, my Tivo, my Sony A/V Receiver, and now one for my 360. Heck I even had remotes for my SIRIUS S50 and my XM MyFi. Six remotes are way too many for me to use at once.
Thankfully while doing my big Xbox 360 Camp-Out, a fellow buyer told me that Logitech was coming out with a 360 version of their Harmony Universal Remotes.

While they weren’t available on launch day, I was able to eventually get my hands on one. Needless to say, after using the Harmony Remote, all my other remotes were thrown in the dumpster. Well not all of them, the 360 remote went for some nice pocket change on eBay.

Right out of the box, the Harmony Remote is preprogrammed to handle every function of the Xbox 360. At that point it is quite an improvement over the Media Center remote, but still not enough to warrant the $129.99 retail price. But lucky for us it is not just for the Xbox 360. It can be used to control EVERY aspect of your gaming rig.

Using a Flash based PC application, any piece of equipment can be configured and added to the remotes functions. Even better, special activities can be made with various components. Want to play Xbox 360? Just press "Play Xbox 360" and the Harmony remote will turn on your TV, select the right input channel, turn on the receiver, switch it to the right audio input, and even turn on the Xbox 360. Just one button press does everything that would take up to 4 remotes!

And what if the activity press doesn’t work completely? Simply press the "Help" button and the remote, via its LCD display, will guide you step by step through every function and will correct any that are chosen as wrong. The remote’s functions are amazing.

If only the same could be said about the PC interface. Since it uses a Flash-based application, there were times I had trouble getting it to run. And when I tried to link up the remote with Logitech’s servers, I actually had to shut down the firewall to get it to work.

Thus getting an initial setup can be a pain. And if you want the remote to be optimized for all of your functions, then expect to take a lot of time, as well as experience a little trial and error.

But if you have the time and patience, and don’t mind losing your firewall during syncs, the Harmony Remote is definitely for you. Combining the functions of four of my remotes into one sweet little package, it has made my life easier! Now if only I can add total functionality for my S50 and MyFi.