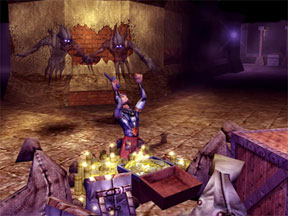 Back in the summer of 2002, developer Bioware released the original Neverwinter Nights role-playing game. This was followed by two expansion packs: The Shadows of Undertide and Hoards of the Underdark. The game showed how well the PC could handle RPGs, with perfect lighting, realistic landscapes and colorful magic spells. The game even used the popular Dungeon and Dragons pen and paper game system rules, which are familiar to a lot of players.

And the series had staying power. The fact that we are still talking about Neverwinter Nights almost five years after it came out proves that point nicely. In truth, Neverwinter Nights 2 is on the verge of coming out, and the top down gameplay style has mostly been eclipsed by more 3D RPG titles like Morrowind (and soon Oblivion). So why is the original Neverwinter Nights engine still relevant?

Because the smartest thing that Bioware did was release The Aurora Toolset along with the games. The toolset is basically the same tools used by the developers to create modules. Although fairly commonplace today, at the time giving players the keys to the kingdom was considered somewhat risky. It was thought by some that if players could make their own modules, that the host company and any future products they tried to sell would be irrelevant. In fact, the opposite was true and even today the game has thousands of fans uploading modules they created for the system and thousands more downloading them for a quick adventure fix.

Atari is now the publisher for the series, and figures that even the aging game can have one last hurrah before Neverwinter Nights 2 with an all new graphical engine and system is released sometime later this year. So Atari gathered some of the best community-created modules and released them alongside the original game and both official expansion packs in the Neverwinter Nights Diamond box, and did so extremely cheaply.

The three premium modules in the Diamond pack include Kingmaker, Shadow Guard and the remastered Witches Wake. Kingmaker is the best of the three, with your hero trying to earn votes in a city under siege so you can lead the army to battle. It’s a good mix of intrigue and combat. And the coolest part of the module is that you get a magical weapon that grows in power along with your character.

Shadow Guard is also fairly good, but quite short with only about three hours of gameplay. It is also a tiny bit unbalanced given that you are expected to be a first level character. I barely was able to get through some parts of the game with a starting character at level two.

And does anyone remember the haunting Witches Wake? This was the game that Bioware used to show off what could be done with a game like the one they were making. Completely remastered, it features creepy graveyards and even the underworld of the dead. Too bad that the game ends suddenly and without warning, and really the ending makes no sense.

There are also several pocket dungeons included like Dark Ranger’s Treasure, which while little more than a couple of maps, make for an hour or so of interesting gameplay. All the pocket dungeons I have seen available for download for free on many sites, but it’s nice to have them all together. Playing the games actually got me interested in the modding community again. I have been visiting a lot of the sites that feature player created mods, downloading them and having a great time.

For just $30, the Diamond pack is a great deal. My only complaint is that the premium module Pirates of the Sword Coast is not included, though once you own the system you can download that adventure from Bioware for $9 more. Pirates is probably worth the money as well, though I do think it should have been included here.

If you have not experienced Neverwinter Nights, do yourself a favor and start now during what is surely the last hurrah before the official sequel. And even if you have played the original game or one of the expansion packs, do yourself a favor and get everything Neverwinter in one place. Like discovering an old friend, I doubt you will be disappointed despite a slightly aging graphical engine. Neverwinter has more than passed the test of time, and would be just as fun today as it will be in 2015.