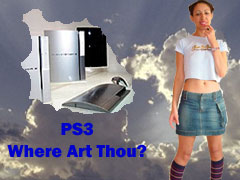 What a week dear play chums. First Sony wakes up and finally announces news of PS3. Yes, it does exist and it will be launched this year. Sony boss Ken Kutaragi revealed earlier this week that PS3 will be launched in November, which means we could all be playing it this Christmas. Well unless there's a world shortage, but that would be just silly, I mean, could you imagine"

And what was Microsoft's response to this third coming of PlayStation? Was it, "We'll fight them on the beaches, we'll fight them in the living-rooms"?"

Wow, bet that's got Sony shaking in its boots. The only saving grace Microsoft had to make up for its wet fart of a console launch and they've relegated it to next year. I know they're all excited about Rare's family friendly Viva PiÃ±ata, but I mean really. So much for, "Halo 3 launch steals spotlight from PS3" type headlines. But all we can do is wait and see dear play chums. Well, that and harp, whine and pontificate.

Of course Sony isn't doing itself any favors by announcing its plans to do a worldwide launch. Maybe it missed the whole I-can't-buy-an-Xbox-360-for-love-nor-money issue Microsoft experienced. Or maybe it's just a case of anything-you-can-cock-up-we-can-do-better so ner ner nuh ner ner.

Kutaragi announced that Sony intends to ship six million units by the end of 2006 – well, good luck with that one. Microsoft must be sniggering into its coffee and donuts. Although, news that the PS3 will offer a free online service to all consumers on the day of launch, may have Microsoft chewing its nails a little nervously.

The latest announcements reveal that the online service will feature everything we've come to expect – voice and video chat, messaging, player ID function and ranking, plus download services for games. However, the key to Sony's free online service is that it allows gamers to play multiplayer games online, with no extra charge. This contrasts to Xbox Live, which requires a fee to upgrade to the gold service in order to actually play games.

But there's yet another twist. With publishers able to run their own game servers, Sony is giving them more control of the player experience, including the possibility of introducing fees.

Cast your mind back to the announcement that NCsoft, MMOG publisher extraordinaire, would not be working with Microsoft to create online games for 360. We never quite got to the bottom of that story, but with publishers able to charge their own fees for playing games on Sony's online service, it may not be a huge surprise for NCsoft to jump on board with PS3. Consider the possibility of the likes of World of Warcraft on PS3 and we could be witnessing a commercial goldmine.

I for one would be Sony-bound if I could get a proper MMORPG experience and the comfort of console gaming.

But before we get hot under the collar about Sony providing free online gaming and then publishers charging us anyway, Sony is apparently discouraging publishers from asking players to pay for the online experience. Once again, it's just a question of wait and see for us mere mortals.

With full backwards compatibility and a 60GB hard drive, the PS3 looks like quite an attractive package. Hopefully it'll have a more inspiring launch line-up than 360 had. Let's face it; it couldn't really be much worse.

Most played: Dead or Alive 4
Most wanted: The Elder Scrolls IV