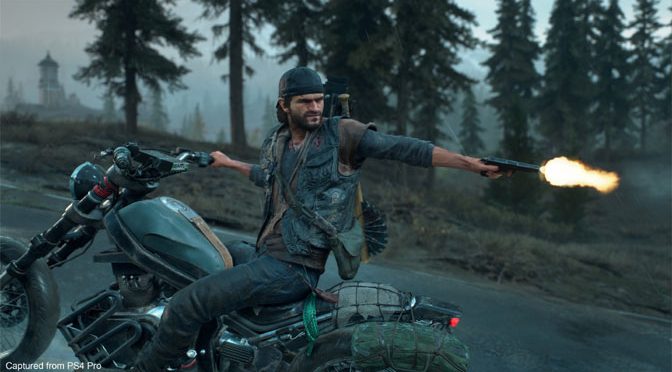 In the leadup to the release of Days Gone, people were legitimately excited. From the trailers and clips, the game seemed to combine lots of great elements that gamers tend to love. I am talking about an open world, zombies, survival horror, a post-apocalypse setting and even vehicles – or at least motorcycles. Since release, the reviews have been more lukewarm than anything else. I don’t think anyone says that Days Gone is a bad game, just that it failed to live up to its hype. While I think some of the criticisms, which I will address, are valid, Days Gone still manages to deliver a unique and fun experience. 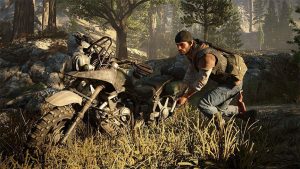 You play as biker Deacon St. John, who is voiced by Sam Witwer. But Deacon was not always a biker, as the game goes to great lengths to show you in copious cut scenes. He served in the Army’s 10th Mountain Division and saw some bad stuff during the Afghanistan War and became a biker afterwards. So Deacon is not some career criminal from GTA Vice City Stories. He’s just a guy who fought for his country and then joined a motorcycle club – one that doesn’t sell drugs or promote racism (as we are told in more cut scenes). Okay, sure, whatever. 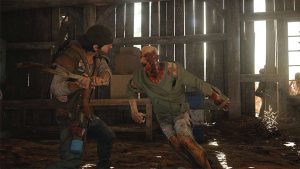 The game starts in a prologue scene that takes place about 700 days before the game. Zombies, which are called freakers in this world, are overrunning the city of Farewell, Oregon. Freakers are actually still alive and not technically undead, as they are people who got infected with a mystery virus. But they serve the same role as zombies in every other game that features them, only you don’t have to shoot them in the head to get a kill, even though that is the quickest way to bring them down. Deacon, his new wife Sarah and longtime friend Boozer – who is also a fellow biker – are trying to make it to the last government helicopter leaving the city. But Sarah gets stabbed in the stomach and Boozer gets cut in the leg. Then the chopper can only take two more people. So Deacon puts Sarah on the chopper and stays with Boozer to help him fight his way out of the city. 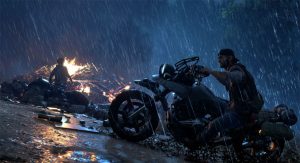 The game begins some 700 days later, and as time passes, the main menu screen says how many days have passed whenever you save or check your stats. So you might start at 745 Days Gone and then get into the 800s as you play. The freakers have overrun the world, and normal humans are living in small, fortified camps trying to eke out a living, or are out in the world robbing and killing as raiders. It’s pretty much every other videogame apocalyptic world in terms of flavor. Sarah is still missing, and Boozer gets injured again very quickly into the game. So much of the plot revolves around trying to keep Boozer alive and investigating what happened to Sarah. You will also be doing lots of missions for friendly camps, and just generally exploring the world. 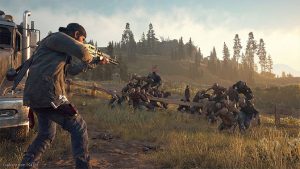 The world itself is one of the most amazing open world experiences that I’ve experienced in this genre, or perhaps ever. It even has a realistic day and night cycle, with freakers much more active at night. There is a good mix of rural and somewhat urban settings (mostly towns) in Days Gone. And almost everything is explorable. There might be a building or two that you can’t get into, but almost nothing is just there for scenery. There is nothing like driving into a little town, capping all the wandering freakers (and gang or cult members), and then taking a stroll through the wrecked grocery store, pharmacy, bar, apartments, factories, warehouses, gas stations and other buildings. Most of them contain crafting supplies that can be used to create weapons or to fix up your ubiquitous bike. 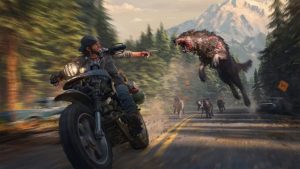 And speaking of bikes, another ongoing mission is to have Deacon fix up his bike. He has a nice bike at the start of the game, but loses it and has to revert to a glorified scooter. Over time, you can build it back up into a heck of a machine. You will use the bike to travel everywhere, and thankfully the driving mechanics for Days Gone are very good. They even change based on the conditions, such as roads getting more slick when it rains or when you are driving on dirt as opposed to pavement.

In addition finding things to craft, you will also need to buy certain things like guns and bike upgrades. To do that, you will have to run missions for the leaders of the aforementioned camps. This is where other critics have said that Days Gone gets a little repetitive. And it’s true, there are only a few different kinds of missions that they dole out. Basically, you either have to chase someone down in a bounty mission which probably means a motorcycle chase and shootout, or go and clear out a nest of freakers or a camp of raiders or cultists. 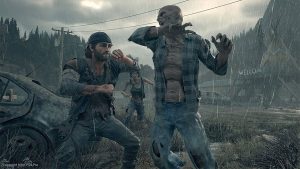 And because of the way the money works in Days Gone, you will pretty much have to do a lot of those missions. That’s because completing them earns you credits to buy things, but only for the individual camp you are working for at the time. Many of the camp leaders don’t actually like each other, and actively compete to recruit survivors and to find resources, so they are not going to honor each other’s credits. You might end up with thousands of credits in one camp but only a few hundred at another. And because camps specialize in different things, like guns or bike parts, you will need to work with all of them to get everything you need, or at least want. 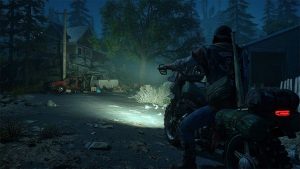 As far as the repetitiveness of those missions, it’s true. However, it’s kind of like that old saying that if you like your job you will never work a day. I enjoy raiding enemy camps, which is the overwhelming bulk of those missions. Some of their setups can be quite elaborate, and the combat can take on lots of different aspects since the game lets you approach things from a stealth or very loud position. So yes, many of the mission types are similar, but if you end up liking them as much as I did, then that’s not so much of a problem. 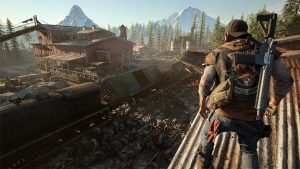 In terms of extra features, one of the coolest aspects of Days Gone is the swarm mechanics. Not every freaker belongs to a swarm, which is a group of hundreds of them that all act sort of collectively, almost like a hive mind. When you run into a horde, it’s terrifying. There are random ones just wandering around the maps, and they are the worst kind of surprise. I had a hoard show up while I was doing a side mission. I was being hunted by evil bikers who were searching for me on the streets of this little village as part of the mission. But on the far side of town, where I was sneaking off towards, I got cut off by a random wandering horde. In that case, I used noisemakers to draw them in, and they went after the noisy rival bikers, tearing them apart while I made my quiet escape.

Compared with World War Z, which also uses swarm mechanics, and which is also a great game, the hordes in Days Gone seem more realistic. You only see thick packs of zombies as part of set piece battles in World War Z, while in Days Gone they, or the freaker equivalents, are a part of the living world. If you want to quietly hunt hordes in Days Gone and turn in their ears for camp scrap (a great way to make money if you are good at it) then by all means feel free. I am sure the game will make more eventually. Mostly I tried my best to avoid swarms. They really are terrifying. 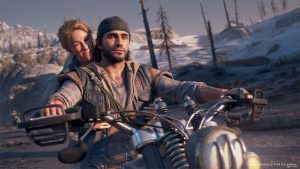 The story for Days Gone is a little weak, and relies on too many cut scenes that tend to drag on for far too long, especially the ones that require the player to do things like follow along while someone talks or perform some odd collection quest. But it’s good enough to move the story along at least. I understood Deacon St. John’s motivations enough to probably want to move forward even if the game world were not very good. It’s just that the open world is so cool, that I really just wanted the cut scenes to end so I could get back to it. 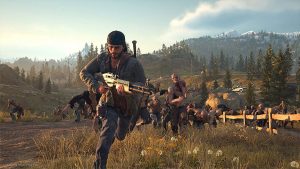 The game was released in April, but SIE Bend Studio continues to support it. They recently released a weekly challenge mode for free that lets players compete in various events for in-game prizes. You can earn special gear, outfits and patches for your biker jacket by ranking in any of the weekly events. And apparently, the plan is to continue to host those events for a long time to come. 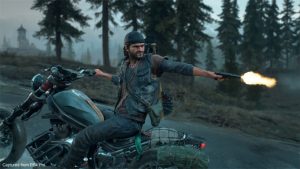 Days Gone probably won’t become the instant classic that people thought it might be when it was announced at E3 back in 2016, but it’s a solid game and a lot of fun despite a few flaws. And it brings a unique aspect to the survivor (with light horror) genre, which could always use a boost. For offering a unique experience and a compelling open world zombie-hunting experience, Days Gone earns 4 out of 5 GiN Gems.