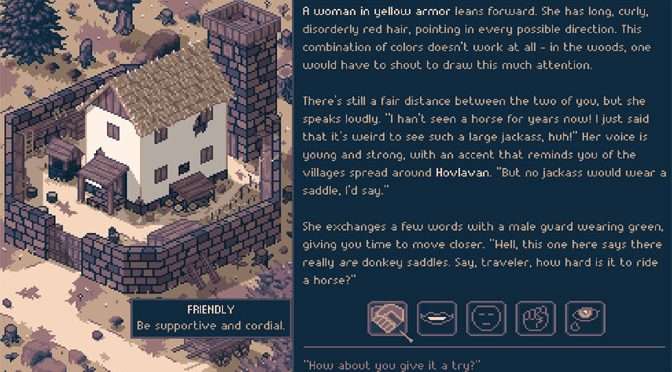 Like a lot of older gamers, my love of text adventures is kind of fundamental to my history with games. Back when computer graphics were pretty basic, we could still play a lot of great games where the computer described the situation and players constructed the rest of it in their minds. Infocom was probably the most well-known text adventure game maker at the time with its titles Infidel, Enchanter and Zork being among the top of their day. Today, text adventures are still popular, with titles like Night Road stretching what the genre can do. 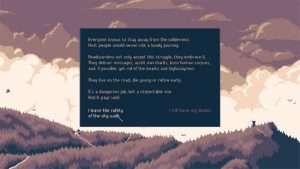 Roadwarden, which is available for the PC through Steam, could certainly be considered a text adventure, since most of it is presented using text. However, Roadwarden also has a graphical component that is perfectly integrated into the gameplay. The graphics set the scene for the player, or they are sometimes used to show a map with a highlighted section indicating where the character is currently standing. In this sense, the title is not unlike other text-based RPG hybrids that seem to be cropping up quite a bit these days, with titles like the more traditional fantasy role-playing Fabled Lands or the sci-fi thriller Citizen Sleeper being good examples. Of all of those games, Roadwarden probably strikes the best balance between text and graphics, because the graphics really do serve to enhance what the text is saying. 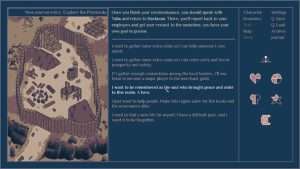 The plot of Roadwarden is really good. In fact, I would even go so far as to call it unique. I could not really think of another game with a similar plot. Developer Moral Anxiety Studio has created an entire world with a deep history of wars, colonialism, political intrigue and religious strife, and then kind of throws players off into a remote corner of that same world where none of its history has much direct impact.

Yes, when you meet different people in this remote place, some of them will be influenced by all those things in the world’s history. But other than their initial reactions or attitudes about you, it won’t really affect what happens. In this way, you have access to a world with a realistic history that is very relatable, but players are still free to influence or change the game world, or at least the tiny part of it that they are assigned to explore. This presents players with both a powerful history and a blank slate at the same time, which is pretty clever. 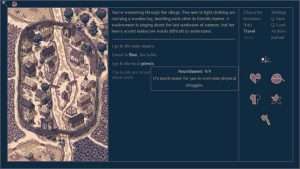 In Roadwarden, as the name suggests, you play as the newly commissioned road warden. In this world, road wardens are hardy individuals who patrol the roads, paths and game trails of remote areas, helping travelers, fighting bandits, assisting the local population and generally acting like a medieval highway patrol. They are also expected to fix and maintain the roads if necessary, so your character is a bit of a public works employee too at times.

Most road wardens also ride mounts, which are exceedingly rare in this world. Some even ride giant lizards called saurians. However, your character has a speedy and loyal horse, which is a good thing because not only does this allow you to more quickly travel around, but it can also be used to quickly haul you away from trouble since your horse is much faster than almost all of the monsters you will encounter. When in doubt, gallop away from trouble. 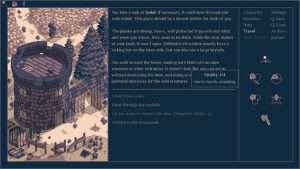 Your new job as a road warden is to enter and explore a large and mostly wild peninsula that is miles away from the capital city where your expedition begins. Technically, you work for a trade guild. Your overall goal is to explore this forgotten piece of land and find out how many towns, villages, tribes and other groups of people still live there, and if they are open for trade or even an alliance with the city and the guild. Apparently, there used to be quite a few trade routes going into this wild land, but they were abandoned during a very long war the city fought, leaving the people who live there on their own. Now that the city is finally recovering, the guild wants to know if it would be worthwhile to start trade flowing again.

The entire game takes place in this wild land, which is made up of a handful of villages, towns, outposts and even individual holds. For the most part, the roads have started to deteriorate, and the villages don’t interact with one another very much anymore. Monsters have started to take advantage of the lack of human traffic too, taking over much of the formerly tamed areas that are not right outside of settlements. You might find everything from goblins to dragons on the roads these days, which makes them quite dangerous for a lone road warden. It’s so bad that you can’t travel the roads at night anymore in this wild land. When the sun sets, you’ll need to find shelter and a safe place for you and your horse to spend the night. At first, you need to balance your exploration activities with your need to find a safe place to rest. As it gets close to twilight, it’s dangerous to keep pushing into unexplored terrain because you don’t know if there is a nearby safehouse. Things get much easier in that respect once you have explored the majority of the map. 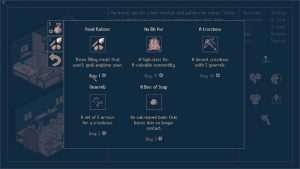 The attitudes of the people of the peninsula towards the city and the guild have also started to decay. Most people have either forgotten about the city and assumed their merchants would never be back, or are happy to be left alone to their own devices. Much of the gameplay will be spent going on quests and proving to the locals that you can be trusted as their new road warden. Even getting certain people to agree to talk with you is sometimes a challenge. 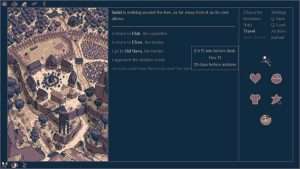 As a road warden, you will face dangerous roadways, an indifferent or sometimes unfriendly population and plenty of other challenges. As a player, you have a choice of three backgrounds to help you overcome all of that. Those include a scholar, mage and fighter. The fighter is probably the easiest class to play. While you get no special advantages in most encounters, you do get a lot of boosts to your combat checks and abilities. When in doubt, the fighter can often use force to get out of difficult situations. The mage is an interesting class that can occasionally use magic (which is a very limited resource) to help solve some puzzles or encounters along the way. It’s almost kind of like a cheat mode where magic can allow you to skip some of the legwork of the other classes. The scholar is, in my opinion, surprisingly the strongest class. While they are weaker in combat, they can use their knowledge in many situations to figure out what is going on or what is needed. And unlike magic, using your knowledge can be done as often as you need. Combat using a scholar character might sting, but they can use their smarts to avoid it much of the time. 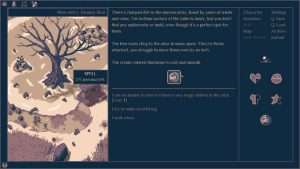 Roadwarden is a text adventure game, but the graphics are also really well-done. Presented in a bit of a sepia tone palette, they are integrated perfectly with the text. For example, when you get to some locations, like an abandoned town, most of the graphical parts of the screen will be blacked out. As you explore different districts, which is done by selecting options in the text screen, the game will uncover that part of the map. It will keep doing that until the entire map is uncovered, or until you leave that location. There are a few dungeon-like encounters in Roadwarden as well, and the map is perfect in those instances because tunnels and passageways will be uncovered as you move through them. Thereafter, your location is highlighted, almost like a kind of “you are here” type of sign that moves along with you. Roadwarden could be played without the graphics, but having them there really enhances the experience.

The sound too is amazing. There are no voices, but instead a variety of environmental sounds that play when you are traveling through different areas. So, you might hear monsters growling in the distance when traveling through jungles, or buzzing insects and birds when in a swampy area. And they are all high-quality sounds too, which made the title seem even more real, and easier for me to imagine and picture the world. 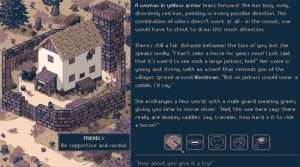 There are not many negatives when it comes to Roadwarden. The only thing that was kind of difficult was the fact that everyone in the peninsula seems to need help from the road warden, so you end up with a lot of different quests, with at least some of them being timed. There is a journal in the game, but even so, it’s a lot to try and keep track of, especially when you don’t really know about the various villages or the names of all the people who live there. Also, there are a few places where you need to enter specific keywords into the game as opposed to just selecting text on the screen. These are words like “trap door” or “fletcher” that are not immediately obvious but are sometimes needed to advance the plot or solve a quest. I thought some of those puzzles were unfair and unbalanced, although a quick Google search was enough to find the answers. It did allow for some funny moments though. At one point I was getting a little frustrated trying to guess at all the businesses located in a town, so I asked villagers to take me to Pokemon, and the game said “…no.” 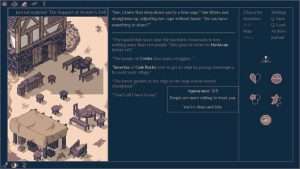 The other thing that is a little troublesome about Roadwarden is that on normal difficulty or above, the entire game is set on a timer, so you only have 40 game days (depending on the difficulty) to report back to the guild, even if you are not finished with all the aforementioned other quests. Personally, I enjoyed Roadwarden’s world and taking my time in trying to experience everything it had to offer. I picked the easy difficulty level for most of my playthroughs solely because it eliminated the timer so that I could enjoy the world of Roadwarden in peace at my own pace.

There is a lot of adventure to be found in Roadwarden. For a title that is being sold for under $10 on Steam, gamers get a lot of bang for their buck. Yes, you can probably speed run it, but careful players can easily sink 10 or more hours into this unique RPG experience. It’s definitely worth tossing a coin to your Roadwarden, which earns an incredibly respectable 4.5 GiN Gems.