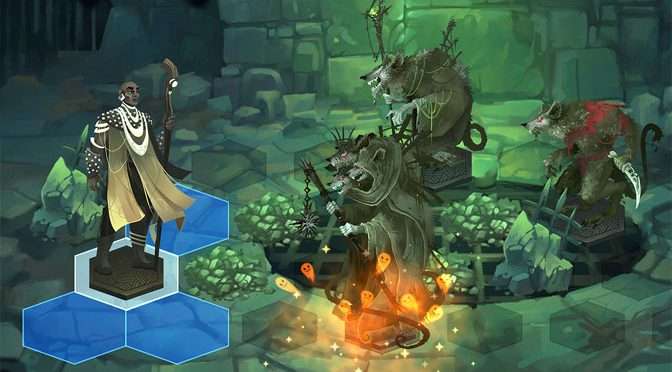 Fabled Lands is a role-playing game that is likely a bit different from most others you have probably played before. I know it was quite a shock for me at first, although once I learned the mechanics of how the game worked, I found it to be a really interesting way to present a deeply detailed world for players to explore. As a bonus, Fabled Lands does not try and hold a player’s hand. You can literally wander off in any direction and get involved in just about anything you want. Whether or not you want to become a hero of the realm, a wealthy merchant, an agent of chaos or just a wandering adventurer looking for their next thrill is totally up to you.

The game is currently available on Steam for under $20, and the amount of content that you get for that discount price is quite a value, assuming you like the kind of gameplay that Fabled Lands offers. 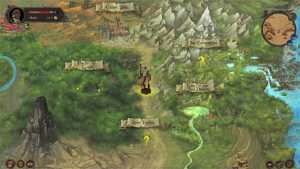 The Fabled Lands video game is based on the paperback gamebook series of the same name written by Dave Morris and Jamie Thomson. Their books are extremely popular, and the content of several of them have come together to form the basis of the video game. Although I have never read/played the Fabled Lands gamebooks, I was really into the Lone Wolf series growing up, so I understand the concept. Gamebooks like that generally present a story to readers with options like a Choose Your Own Adventure title, only instead of just making story choices you sometimes need to roll dice or refer to your character sheet before proceeding. For the Lone Wolf books, if you didn’t have any dice handy, there was a chart of numbers in the back of the book that you could randomly pick from when prompted. 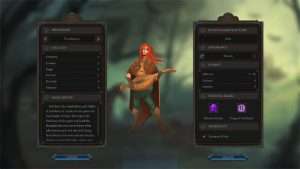 For the Fabled Lands video game, all of the dice rolls are of course handled by the computer. Most rolls are heavily modified by your character’s skills, which you can grow in the game in response to events or which are also modified based on the types of equipment you carry, with one slot available for each major skill. For example, if you acquire and slot a golden compass into your scouting item block, you can get a plus two bonus added to all scouting rolls. Similarly, holding a magic wand in your character’s magic slot will boost those rolls. Higher quality items give higher boosts too, so you will always be upgrading everything you can as you play. 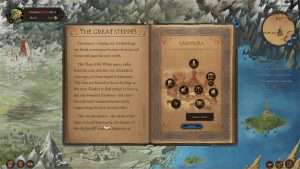 The game does not hold your hand or even lead you in any particular direction. Freed from the linear nature of a book’s pages, developer Prime Game instead presents an open world for the players to explore. Yes, there are lots of quests to find and do, as well as achievements to try and accomplish, but how you do them, or even if you do anything with them at all, is completely up to you. Notably, quests are not parsed based on so-called main or side quests, only by the region where they need to be completed. You are free as a player to prioritize anything you want. You might even just want to wander the world, reading the descriptions of the various cities, towns and landmarks that you visit and getting into whatever trouble or adventures they offer. 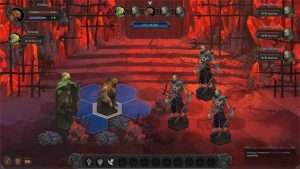 Although you have total freedom to do whatever you like, many quests are tied to certain character classes. For example, you might get asked to steal a valuable item from a well-guarded fortress. If you happen to be a rogue, then that may be exactly what you are looking for in terms of work. Other characters can attempt to do the same quest, although without high thieving skills that might be tough. Completing a quest within your original character archetype (priest, bard, thief, wizard, etc.) will earn you better rewards too. Any character who completes the aforementioned theft quest might earn a skill point and gold, while a dedicated thief might get that plus the ability to advance one whole character level, which boosts skills and abilities across the board. So your starting choice of character does matter somewhat in demonstrating how you want to play the game.

In addition to typical adventuring quests, there is also a large sub-game where you can purchase a ship and load it up with goods, buying low and selling high. You will run across adventures while doing that too, but it was interesting to find a merchant type of game as yet another possibility within the Fabled Lands. 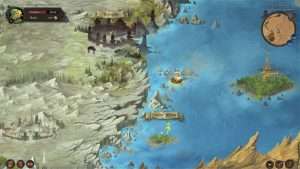 I personally loved the freedom to just wander around the world, taking on epic quests whenever I felt like it. However, some people will likely get bored by this concept. We are used to RPGs where our main quests and goals are tightly presented, where ultimately we are going to have to save the world, kill a dragon, unite a kingdom or any number of epic and near-impossible goals. Yes, there is some of that in Fabled Lands, but you are just one adventurer wandering around in a big world. Whether or not you want to participate in any of those types of activities is up to you. Those who want more definition for their adventuring will likely not like wandering around this game looking for something to do. 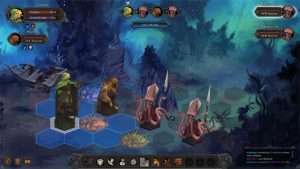 There is also tactical, turn-based combat in Fabled Lands, although it’s pretty simplistic compared to many other titles. You fight enemies on a hex map that is normally longer than it is wide, with opposing forces starting on opposite sides. You spend action points each turn to use special abilities, move your character or attack. In my experience, the gameboard for that combat is too small for really tactical gameplay. Enemies generally just try to rush straight at you (often getting jammed up in choke points) and then overwhelm you with superior numbers. I found that by using special abilities like tossing grease on the ground (in those chokepoints) to stun enemies and then using ranged combat to pepper them before they can get close, I was able to punch well above my weight in most fights. In any case, the combat is probably the weakest part of the game, but it’s there and is at least passible in terms of quality. 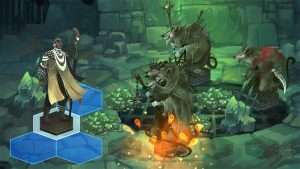 Another potential negative in Fabled Lands is the reliance on dice rolls. If you are unlucky, then you can expect to die at least a few times because you just rolled snake eyes when you needed a three or better, or some other heartbreaking circumstance. Fabled Lands does let you save whenever you want on normal difficulty however, so doing that before each encounter is highly recommended. Yes, save scumming is not a lot of fun, but there are several places in the game where you are forced to roll dice without being able to modify the result based on your character. For example, you just roll a d6 and if you roll badly, someone or something will steal your gold, infect you with a virus or remove all of your magical blessings. That is really unfair and frustrating, and your only defense is to save scum, so be prepared to do that a lot if you don’t want to get cheat-killed or otherwise cursed by a wayward die roll. 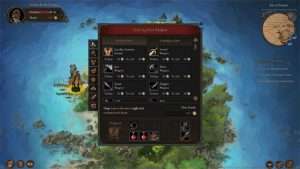 If you are looking for a literal storybook world to explore with good writing, nice graphics and the freedom to play however you like, then visit the Fabled Lands. The game offers many hours of chill adventuring and exploring, and lets you not only set your own goals, but also the ability to pursue them at your own pace. And I guarantee you will be in for quite a few surprises out there as you explore these aptly named Fabled Lands.