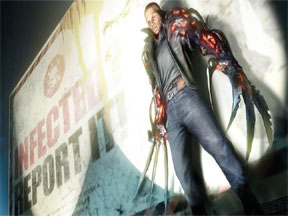 I never did get a chance to play the first Prototype game very much. I knew the basic storyline and some of the fun things you could do. So I was happy I got the chance to play Prototype 2.

The game starts out with a interesting opening cut scene. Within a few moments I was instantly sucked in to the game as well as the main character’s back story. With cans of pop covering my table, I expected a high octane gaming experience.

I was sadly disappointed.

After the opening movie it went to the tutorial section. I will give this game credit with the controls. They were really easy to pick up and master. Before long you meet the anti-hero from the first game, Alex Mercer. You play as Sgt. James Heller, whose family recently died due to what was named the Mercer virus.

Because of this, James is making the death of Alex Mercer the last thing he does. This was in the first fifteen or so minutes of the game’and then it goes completely downhill. This brought back memories from sitting at my cousin Dakota’s house as he played the first one.

While the controls were easy to master, they were on the touchy side. That caused me a problem here and there. One of the bigger issues was the redundant game play. My biggest pet peeve with the first Assassins Creed was doing the same thing over and over again. Prototype 2 was similar because it was completely redundant. Every time it was ‘go here, absorb this guy to sneak into a locked down place to absorb someone else.’ When there finally was a fight, I was practically comatose by that point.

What really dinged points off of the fun score was the course the story took. After the first half hour or so I lost interest completely. It takes a lot for me to be so bored with a story that I started thinking about my college work rather than the game. The entire time I fought through, just hoping to at least get some of the upgrades.

Eventually I unlocked some of the interesting upgrades. In order to unlock these upgrades you have to either kill special creatures or find hidden items. The first one I got was from killing a creature and I took its claws. Now I will be honest, you unlock some really awesome upgrades.

The problem is short of going on a random killing spree, you really don’t get the opportunity you should to use them. When I first got the claws, then during a fight I was leaving a wake of carnage behind me. After that mission I wanted to keep fighting and testing my new power. Instead I went out and had to find a mission, track somebody down and absorb them. The claws don’t leave anything left to absorb, so there was my issue. You should not be given toys and then encouraged not to use them.

One bright spot was movement. In this game you can run straight up a vertical wall with no problem. First time I did that, I swore I was hallucinating. The size of the world was also fantastic. Not quite Skyrim in size, but still pretty large for an action game.

Prototype 2 overall is simply an average title. I expected a lot more from it in terms of fun factor and action. This game suffered from Brink syndrome. For those who are a little confused to my reference, Brink was a first person shooter that was hyped up to be revolutionary. Instead, it was so bad that almost nobody, myself included, really enjoyed the game. Prototype 2 isn’t that bad, but those looking for anything more than an average gaming experience are going to be disappointed.

Prototype 2 isn’t horrendous, however, it should remain far from the top ten of your ‘to get’ list. Despite being labeled an action game, it lacks almost every bit of an adrenaline fueled fighter. Overall, I give Prototype 2 an average 3.5 gin gems.