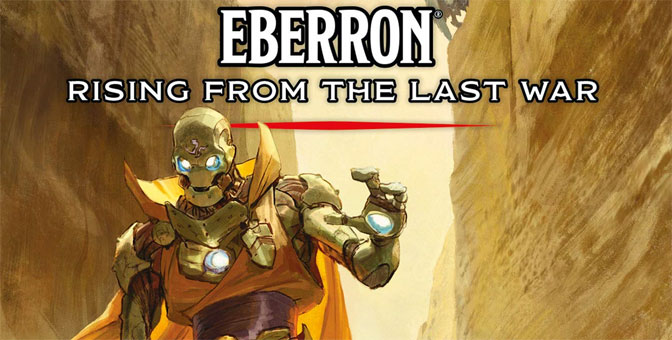 Eberron: Rising from the Last War

It’s a good time to be a fan of Dungeons & Dragons. After a few years of just limping along, Wizards of the Coast is really putting a lot of effort and support into getting all of their existing campaign settings into the new and streamlined D&D 5th addition ruleset. They are also releasing a lot of unique supplements and even totally new campaign settings. It’s clear that support for D&D is at an all-time high.

Part of that support includes releasing a lot of new supplements and box sets, like the excellent Ghosts of Saltmarsh one which added a modern twist to a set of classic modules. Or Baldur’s Gate: Descent Into Avernus which brings new life to a historic city, and takes adventurers on a brand new voyage into the nine hells. And, compilation sets like the Dungeons and Dragons Essentials Kit should help shepherd new people into the game.

That outreach also includes a new realm of non-canon, unique stories that do everything from change the rules of the core game to providing unique, non-traditional content. A good example of this is Acquisitions Incorporated, which is based on the Penny Arcade podcast and cartoon. We even recently reviewed Rick and Morty vs Dungeons & Dragons, which was quite good, especially if you love the Rick and Morty cartoon. 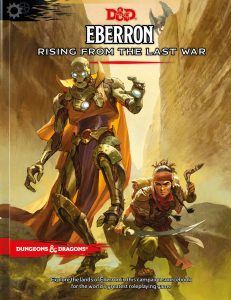 Which brings us to the hardcover tome we are looking at today, the Eberron: Rising from the Last War campaign setting and adventure book. For those of you who are not familiar with Eberron, it’s one of the most unique areas and settings in the collection of D&D worlds. There are so many unique things about Eberron that it would be difficult to list them all. But the main things that set it apart from others are the dragonmarks that appear on people who live there and which grant them special magical powers as well as bind them to a specific house; the fact that magic has advanced to the point where it almost looks like science in things like air ships and electric trains; an entire race of warforged people who are basically living robotic-like constructs; and the fact that the last war was so devastating that there are hundreds of miles of uncharted battlefields teaming with powerful artifacts as well as incredible dangers.

[amazon asin=0786966890&text=Add some magical mystery to your Dungeons and Dragons with a copy of the Eberron: Rising from the Last War campaign setting from Amazon.]

Thankfully, the new 320 page book is filled to the brim with the history and lore of this strange and wonderful land. Those who are not familiar at all with Eberron will get everything they need to set fascinating campaigns there from this book. 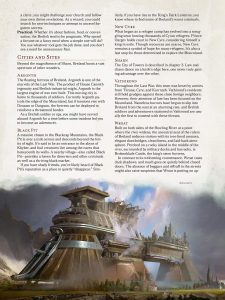 Of course, this being Eberron, a lot of time is spent explaining the various dragonmarks and the houses that rule them. There are 12 known marks in Eberron that appear as a magical tattoo somewhere on a person, and all of them grant their bearer some degree of power which can be anything from healing to offensive to utilitarian magic. Dragonmarks level up just like a character class, and it’s cool because the tattoo becomes more defined the more powerful it is. That way, people can glance at a dragonmark and have some idea how practiced the person who bears it is at using their powers.

Although you are not actually bound to a house because you bear their mark, most people who hold a mark will be a part of that house. For players, this is a pretty good thing because the house will provide some resources for members, even if it’s just a safe place to sleep or a small meal when traveling in new cities. It also can be a great adventuring hook for game masters, as a house can ask a favor of one of its members as a condition of either membership or advancement. The book explains what the various houses believe, how they operate, their relationship with the other houses, and their overall goals in the world. 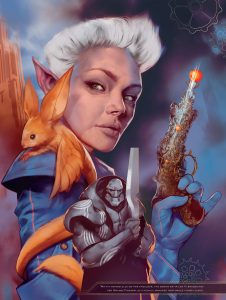 There is also a fascinating new class introduced to the game for Eberron called the artificer, which is tailor-made for those who enjoy crafting. You basically use your imagination combined with your character’s magic to come up with new artifacts that can be anything from a sci-fi like weapon to a utility tool or even a child’s toy. There is a very nice system that shows how to craft these new devices so that they are not overpowered, but are fun and useful to have. Really creative players will love this class.

Another major section in the Eberron: Rising from the Last War book includes the brand new patron section. This surprisingly detailed addition provides a way for adventuring groups to come together for a common cause, united under a wealthy and well-connected patron. It also shows how a patron can provide resources and sometimes access to restricted magic and equipment. Perhaps a group’s patron might even provide them with something really cool like their own airship/clubhouse as a conduit for adventuring. Both dungeon masters and players will really enjoy this new system, as it might be the best part of the entire book.

There is also an entire section to help dungeon masters build Eberron-flavored adventures. This can help fledging or even experienced DMs put together a campaign that really taps into this fascinating world. In terms of ready-made adventures, the book comes with one that pulls characters into the mysterious Mournland, a huge, mist-covered land filled with war dead, artifacts and deadly creatures strewn across a landscape that has been horribly twisted by magic.

In terms of extras, there is a large, detachable poster-sized map in the back of the book that shows the entire land of Eberron. Because the map is so large, there are a lot of interesting details included that should give a new appreciation for this strange land. 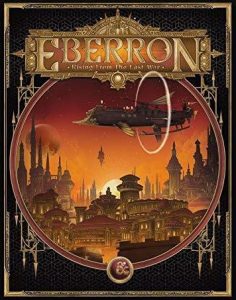 As with most of these new D&D supplement books, there is also an alternative cover version available. Normally I would not recommend buying the alternative cover supplement because they are exactly the same as the standard book, but more expensive. But in this case, it might be worth the splurge as the alternative cover looks really amazing, with a graceful airship sailing over a cityscape that is almost like a science fiction metropolis, or perhaps something from The Outer Worlds. The alternative cover book is also bound in black, which gives it the appearance of being a leather tome. But it’s totally up to you, and both versions are the same other than the covers.

[amazon asin=B07XC3CH1R&text=Pick up the alternative cover version of the Eberron campaign guide from Amazon.]

In terms of my personal preference, I’ve always put Ravenloft at the top of my list of favorite campaign settings, but Eberron was always a close second. The Eberron: Rising from the Last War Campaign book may have me reevaluating that list. The amount of unique adventure to be had in Eberron now is hard to beat. In any case, both game masters and players should find a lot to love in mysterious, magical Eberron.