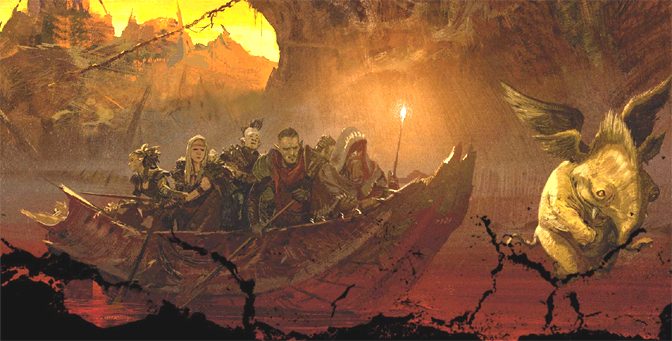 These days, it seems like current Dungeons and Dragons owner Wizards of the Coast is putting a lot of effort into content aimed at beginning level characters. Most of the fifth edition supplements we have reviewed lately follow the standard format of having a party begin at level one and climb to somewhere between 10 and 13 by the end of a long campaign. This makes sense given that one of these epic adventures can provide months of content for a D&D group, especially if they only meet weekly or so. And there is something very cool about starting out as a weak but motivated hero and eventually getting up into the levels where at least some of your tricks are kind of god-like in power.

One of the most detailed campaign settings that we have reviewed so far is Ghosts of Saltmarsh, which combined several classic seafaring D&D modules into a long campaign. There was even some original content in Saltmarsh, but much of it was based on already-written modules – not that they were bad or anything. The newest campaign tome, Baldur’s Gate: Descent Into Avernus, is much more original, taking players all the way into the first level of the Nine Hells, and if they are lucky, back again.

Obviously most players have heard of Baldur’s Gate, if not from pen and paper D&D then from the classic computer RPG which was one of the best ever made, or even some of the other related properties that have come out over the years, like the amazing Betrayal at Baldur’s Gate board game. We did a really fun Let’s Play video of that game if you are interested. 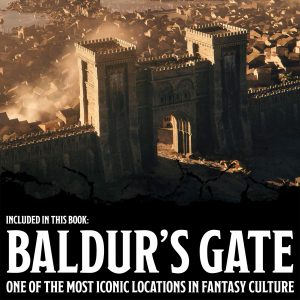 Oddly enough, the city of Baldur’s Gate is actually only one part of Descent into Avernus. You start out there and go through several missions, enough to get players to about level five if they do everything right – and survive. There is more than enough content for players to get a nice take on this amazing, dreary and deadly little city. They will even be able to visit several iconic locations like the Elfsong Tavern, The Low Lantern and of course the sewers under the city. After that, it’s off to the first level of the Nine Hells, Avernus, which is technically the main focus of this campaign.

The main premise of the module is that a city called Elturel is being physically dragged into hell by massive infernal chains. Apparently their mayor made a bargain with a fallen angel turned archdevil named Zariel, and dragging the city into hell was part of the deal. And you thought politicians in real life were bad. If nobody stops this, then Elturel will end up falling into an area of hell close to the River Styx. 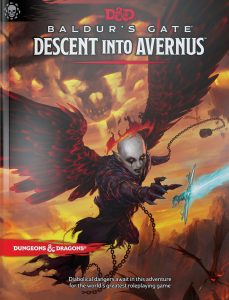 Unlike many adventures, Descent into Avernus is fairly open-ended in terms of how the players can accomplish their ultimate mission. There is the roundabout approach of course, recruiting enemies of Zariel to disrupt her plans. Or players can find a way to shatter the chains. They can even offer up their own souls to Zariel (not a great option but available) in order to save the day. Finally, those who are really good talkers, as in, have a high enough charisma and diplomacy skill to convince a former angel to change her ways, can try to get Zariel to renounce evil. This modern, open-ended approach to a pen and paper game is refreshing, and much more like how good computer RPGs operate these days. Nobody is going to feel railroaded by the choices in Descent into Avernus.

There are a few new concepts introduced during the module. Similar to how Ghosts of Saltmarsh included rules for ship combat, Descent into Avernus introduces infernal war machines, which are basically hellish tanks that demons like roll into battle. Early in the second part of the adventure when the characters arrive in hell, they can bargain for a cool vehicle that is like a mini infernal machine. Driving that around hell and engaging in vehicular combat is going to be a unique experience and a memorable one for sure. This makes large parts of the game like Car Wars, or perhaps Mad Max. It was a ton of fun for the players to ride through hell like total badasses in their custom vehicle. The test group had a ton of fun with that. 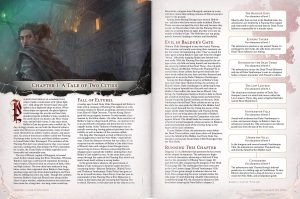 The module also acknowledges the fact that much of the adventure takes place in the devil-dominated parts of hell. Whereas the abyss where the demons live is often chaotic or even alien, devils are much more structured. They are evil, but lawful. Most devils are primarily concerned with getting promoted and moving up the ranks to higher forms, and are willing to strike deals with mortals in order to do that. As such, the game master is given a lot of shady bargains that devils can strike with players, which sets up some very unique and interesting roleplaying encounters and choices. Descent into Avernus gives details regarding what each devil the players might encounter can offer, and what they would want in return. Careful players who are a little bit lax on morals could clean up with some of those deals, especially if they can out-think the devils in terms of contract negotiation.

Avernus itself is a hellish place, but also pretty cool in spots. There is a lot of backstory and details provided to help really bring it to life. This includes a motley collection of NPCs that can almost steal the show. Some of them might even be willing to join the party and help out, though I would not turn my back on many of them.

To further expand the game world, Wizards have released a few interesting supplements to go along with the Descent into Avernus campaign setting. One of the most interesting packs that Wizards sent along for our D&D group to evaluate was the Avernus Dice and Miscellany pack. 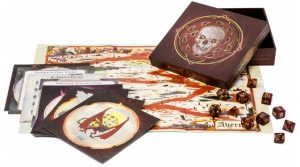 The pack consists of a full set of hell-themed dice, a set of bonus encounter cards to add more content to the core game, foldout maps of Avernus and a sizing chart for all the demons and devils of the Blood War. There is also a trinkets pack which was pretty cool. It consisted of interesting items that players could find while tooling around in hell. None of them are particularly overpowering, though all have backstories and possible hidden uses (or curses). It was a real joy to hand these out to players, actually giving them the relevant card which they could keep with their character sheet as evidence of their treasure. In general, the pack adds a lot of value to the module. Game masters who are planning on going all in with Descent into Avernus should probably check it out to enhance their game.

Baldur’s Gate Descent into Avernus provides a unique and interesting adventure that runs the gamut from one of the most classic D&D cities to a literal layer of hell. Trying to describe all that adventure in detail is quite ambitious, but Descent into Avernus does a great job. Game masters looking to provide their players with a memorable experience will be pleased with the content provided. The open-ended nature of the campaign does mean that a little more preparation will be needed, as players are sure to use that freedom to stray from the beaten path, but this adventure more than most has the potential to become one of those D&D experiences that players remember and talk about for years to come.