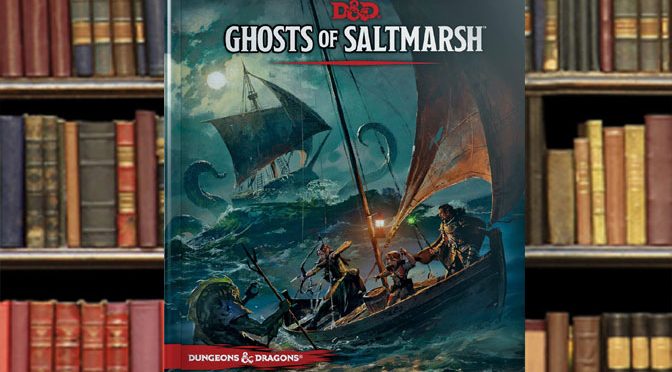 Gather around and I’ll tell you a tale of heroism, treasure hunting, high seas adventure, political intrigue, ghosts, dragons, war and peace. Actually, since we are talking about the latest Dungeons and Dragons mega-campaign book, Ghosts of Saltmarsh, you can actually roll up a character and become a part of this grand story.

Ghosts of Saltmarsh is one the biggest supplements released for the Dungeon & Dragons campaign worlds, and it’s nice to see that the current owner of the franchise, Wizards of the Coast, is putting a lot of upkeep and pride into the game. The adventures in Ghost of Saltmarsh are all taken from either Dungeon Magazine or some of the classic D&D modules, specifically the U-series for those of you who (like me) are “classic” enough to remember such things. All of them center on either seafaring, or at least seaside, questing. They have also been updated to the current fifth edition D&D system. 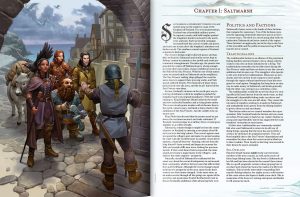 Just in modules and adventures alone, Ghosts of Saltmarsh is worth the price of admission. You get the Sinister Secret of Saltmarsh, Danger at Dunwater, Salvage Operation, Isle of the Abbey, The Final Enemy, Tammeraut’s Fate and The Styes. These are, at least in my opinion, some of the best modules of their day, which ranged from 1981 to 2005. They introduced not only aquatic adventuring aspects to the core game, but also the revolutionary (at the time) concept of non-linear gaming, deeper role-playing, and adventures that required brains over pure hacking and slashing. They were written by some of the best of the early D&D authors and adventure-makers including Dave J. Browne, Don Turnbull, Mike Mearls, Randy Maxwell, Greg A. Vaughn and Richard Pett.

Each of the adventures can be played individually as originally intended, or they can be strung together into a campaign setting. If being used as the basis for a campaign, which is probably the best and most fun use of this new supplement, then players will be able to go from first level all the way up to 12, assuming they survive the journey. 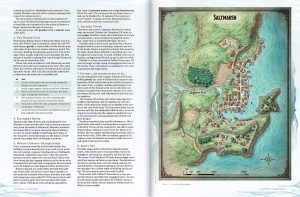 The town of Saltmarsh acts as a hub that connects all of the adventures in the game. More than just a place to rest up and gear up, Saltmarsh is fully mapped out with details about major citizens, with both their public and secret goals and motivations given to game masters. Each of the various political factions operating within the town are also explained. I could see a gaming group really getting into an adventure within the town itself, helping various residents get a leg up on their rivals, assisting one faction or another in controlling or taking over the town, or combatting any of the simmering evil threats and plots which also call Saltmarsh home. That might require a little bit of extra effort by the game master, but the baseline of everything needed is included. There are also a few optional adventure hooks around Saltmarsh where the book states that enterprising DMs can create their own dungeons.

[amazon asin=0786966750&text=Grab a copy of this collection of amazing seafaring adventures from Amazon!]

While the adventures, plus the detailed town of Saltmarsh, are clearly the centerpiece of Ghosts of Saltmarsh, the book also provides a new system for seafaring and combat. There is a complete set of rules for ship combat and sea travel. Several ships also have their complete deck plans detailed and ready for modification into other campaigns, or simply copied directly to wherever adventure needs a similar vessel. This makes Ghosts of Saltmarsh helpful to other campaign settings too. For example, I could have really used those rules, and at least a couple of the ships, for my Out of the Abyss campaign, as my party spent a lot of time on the dark seas of the Underdark. 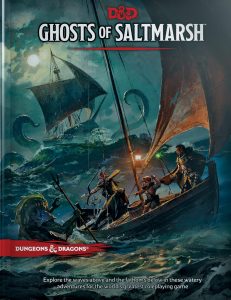 The main Ghosts of Saltmarsh book, which is available from Amazon and other online stores, has a really nice cover illustrated by Grzegorz Rutkowski. There is also a special edition of Ghosts of Saltmarsh with a different, darker cover. The special edition was only given to sell at game stores, which is kind of a cool idea to support those local gaming shops. If you want one of the special covers, check out your local store, assuming you are lucky enough to have one. Other than the cover, the two books are identical.

It’s clear that many videogames such as the nautical-based Pillars of Eternity: Deadfire were probably influenced by D&D modules like Danger at Dunwater or Salvage Operation, and for good reason. It adds another cool element to an already fantastic world. If you enjoyed any of the classic seafaring D&D adventures back in the day, or simply want to add some pirate spice to your gaming group, then Ghosts of Saltmarsh is a great guide to making that happen.

When I told my gaming group about this new addition that I would soon be adding, they were incredibly excited. I think your favorite D&D group will probably feel the same way. Fair winds and calm seas to your adventurers if they choose to set off to find their fortune in Saltmarsh and beyond.