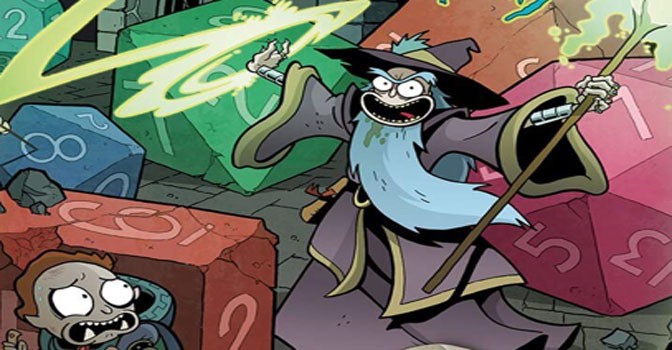 Rick and Morty vs. Dungeons
and Dragons

It wasn’t that long ago that Dungeons and Dragons seemed to be almost disappearing. Not a lot of new content was coming out for our beloved game. Of course, people would have still played even if the series was no longer supported. For example, I have at least 15 homemade modules and adventures ready for a pickup game. Anyway, those dark(er) days are long behind us. When Wizards of the Coast picked up the D&D license, I was a little worried. Wizards is known, of course, for Magic the Gathering, and it’s quite a cash cow for them. I thought D&D might become like a neglected stepchild. But no, they are supporting the game now more than at any time in recent memory.

Part of that support includes releasing a lot of new supplements and box sets, like the excellent Ghosts of Saltmarsh one which added a modern twist to a set of classic modules. Or Baldur’s Gate: Descent Into Avernus which brings new life to a historic city, and takes adventurers on a brand new adventure into the nine hells. And, compilation sets like the Dungeons and Dragons Essentials Kit should bring new people into the game.

The outreach also includes a new realm of non-canon, unique stories that do everything from change the rules of the core game to providing unique, non-traditional content. A good example of this is Acquisitions Incorporated, which is based on the Penny Arcade podcast and cartoon. There is also a Stranger Things package out there, though I was sadly never asked to review it.

Along those lines, we now have Rick and Morty vs. Dungeons & Dragons, which is, if you couldn’t guess, based on the wacky comic book series and TV show. Anyone who is familiar with Rick and Morty will know how insane and irreverent the show is, and the boxed set follows that pattern perfectly. In fact, look, if you are a Rick and Morty fan, you can stop reading now. This is an amazing adaptation based on a story arc from the comics. You should get this.

[amazon text=Why are you still reading this? You should be over on Amazon getting a copy of Rick and Morty vs. Dungeons and Dragons!&asin=0786966882]

For everyone else, I still think there is a lot of fun to be had. In fact, although nobody in my gaming group (or even myself) are really hardcore fans of the series, we all had an amazing time. The module that comes with the game is almost like a parody of a D&D adventure, while also being one itself. Hopefully that won’t blow your mind too much. But know that it’s quite fun.

The boxed set is authored by Jim Zub who is the co-writer of comic book series, so he’s pretty familiar with the flavor. It’s illustrated by Troy Little who draws that comic. The box includes a 64 page rulebook that changes how the standard game is played in a few key ways. The rule books is also more than just a dull explanation of saving throws. It’s annotated by Rick and quite funny. In fact, the rule book might be a little more humorous than the 32-page adventure, called The Lost Dungeon of Rickedness: Big Rick Energy.

The adventure is designed for up to five first level characters and is kind of like a Tomb of Horrors light sort of experience. The rooms are clever and also sometimes stereotypical. For example, there is a Goblin Room, Another Goblin Room and a Third Goblin Room, which is kind of funny once you get the joke. Then there is also a Butt Room and a Buttless Zombie Room. And then there are also some truly clever places like The Writers Room, which I think people will especially love.

You also get a dungeon master’s screen in a Rick and Morty theme and 11 polyhedron type dice, which are colored in a fluorescent greenish tint to match the show. The dice are the subject of another joke too, whereby they are written into the module as a minor treasure award. The player who takes them gets warm feelings when holding them, thinking back about the many murders they committed over the years. They also pick up a curse where they must collect as many dice as possible. I’m sure many gamers will understand that joke quite well. You know who you are, with your Crown Royal bags stuffed full of those colorful treasures.

This is probably one of the most well-done Dungeons & Dragons boxed sets for a non-traditional setting. And it sticks to its advertised Rick and Morty theme amazingly well. A group of non-hardcore Rick and Morty fans had a total blast playing this one. If you do love the comic, then hold onto your buttless zombie pants, because you are in for a wild ride.

Rick and Morty take on Dungeons and Dragons is fantastic and fun, perfect as a diversion for a more serious D&D group, or as an epic one-shot party. It’s a critical hit!