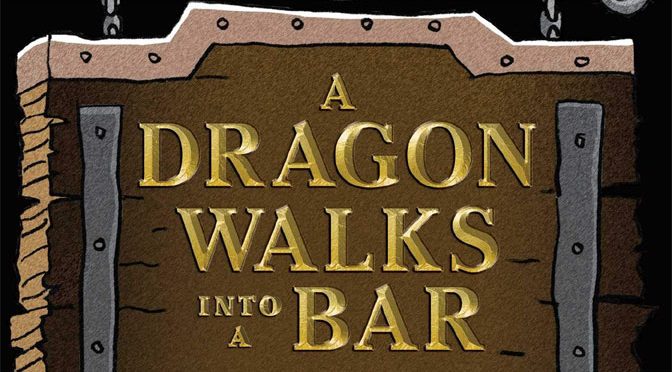 A Dragon Walks into a Bar

This A Dragon Walks into a Bar RPG joke book is good for more than just a few laughs because one of its writers was a stand-up comic (John Taylor) and the other (Jef Aldrich) started as an entertainer at Sea World. Together they do an irreverent podcast devoted to RPGs called System Mastery. Much like their podcast they make fun of all the regular tropes in fantasy RPGs while reveling in them. 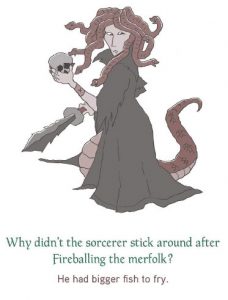 This is an obvious labor of love that grew out of their years of podcasting together. The Roll for Initiative Tragic Backstory, with the lines, “My ________ was __________ by a ________” is a funny send up of that any regular RPG group could use for a funny one-shot adventure. The random answers move from the cliché to the catastrophically crazy in a very effective bit of satire.

Here are some of the many one liner jokes that give an idea of what range of humor you can find.

“Why are there no vampire philosophers? They don’t reflect.”

“Nobody trusts a bard because they are always seen walking around with a lyre.”

“Why can’t zombies write good music? They can only de-compose.”

“Where can you find a rules lawyer? By the book.”

“Where to people buy their giant hammers? A maul.”

“What’s a dwarf’s favorite thing to listen to? Rock music.” 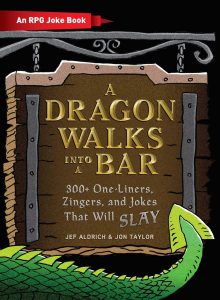 There are longer jokes, funny stories and humorous shorts after certain jokes called “Jef’s Annoying Sidebars.” These delve deeper into a joke and tell another one that builds on the first one. It is reminiscent of the podcast and also sounds like that type of discussion you see at every RPG table.

[amazon asin=1507212186&text=Liven up your next role playing session with a copy of A Dragon Walks into a Bar from Amazon!]

A Dragon Walks into a Bar would make a great gift for any friend or family member who loves fantasy RPGs like Dungeons and Dragons, Pathfinder or Dungeon World. Or use it to spice up your next RPG game.