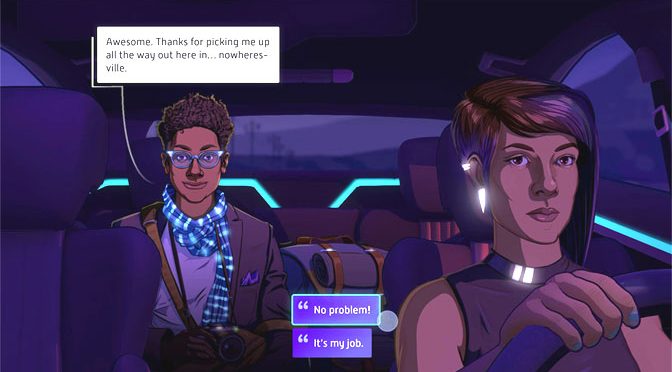 Game developers have figured out that cab drivers make for good characters. Not only do they get to travel all over the city where they work, but also get exposed to all different kinds of people, from saints to sinners. That makes them perfect for a narrative kind of game, especially one where people talk to advance the plot, and the player makes dialog choices to steer the story.

Recently, I reviewed Night Call, which is a film noir type of game featuring a Paris cab driver. In Night Call, you also moonlight as a detective trying to catch a murderer before becoming their next victim. I thought that Night Call was pretty unique, but then a couple of months later Neo Cab was released. The games are set in different places, as Neo Cab takes place in a cyberpunk-like city of the future that is called Los Ojos, but which is pretty much supposed to be Los Angeles. Their art styles are also quite different, black and white Noir for Night Call and neon Art Deco for Neo Cab. But beyond that, they are eerily similar, right down to the driver as detective mechanic. As such, there will be comparisons made, though I think that both games can easily stand on their own. That said, if you like one, you will probably dig the other too. 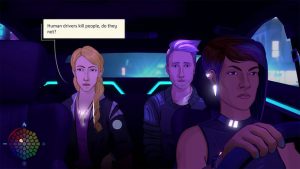 In Neo Cab, the story begins as your character is moving to the big city of Los Ojos from a small town. Apparently your main character was a cab driver in that town, and is planning to keep doing the same kind of work in the city. She is more of an Uber driver in that she owns her own car and is able to move around and switch locations like that without much hassle.

Your character has a friend from back home who moved to the city some time ago, and she has offered to let you stay in her spare room while you learn the landscape and get on your feet. You pick her up in your Neo Cab the first night you arrive in Los Ojos, and immediately begin making plans. But your friend has something important to do, and asks you to drop her off downtown somewhere, promising to text you sometime later so that you can head over to her apartment to drop off your stuff. 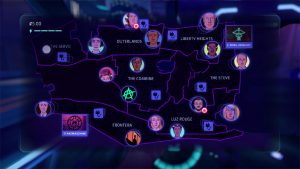 Left alone, you decide to go to work and earn some money with your Neo Cab. You locate passengers by opening up a mapping application on your phone. Those who have asked the Neo Cab app for a ride have their pictures come up on the display, along with a short description which gives a clue about how easy the ride will be. Thankfully, you don’t actually have to know the city. Once you pick someone up, your character will begin driving them where they need to go. All you have to do is chat with them, smooth talk them if you can, and try to get them to give you a five star rating once you drop them off.

The dialog options are the key element of the game, and Neo Cab does a great job of providing a nice little stable of wacky passengers for you to interact with each evening. Getting passengers to like you is very important in Neo Cab, even compared with Night Call, because in addition to trying to get a bigger tip, in Neo Cab they directly rate you. If you don’t maintain a four (of five) star rating or higher, you will be fired from your job. In addition to keeping high stars, you also have to make enough money each night to pay for your lodgings (more on that in a second) and also to keep your electric car charged, which costs money. 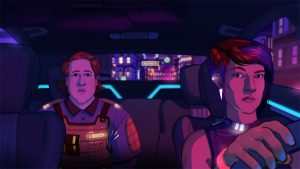 You also have a bracelet that records your emotional state, like a futuristic mood ring. It turns red when you get angry for example, and blue if you get depressed. Yellow is for excitement and green is for calm. You can also be between two states, like orange if you are excited or aroused. Honestly, I didn’t like this part of the game. It’s unique, but your mood restricts some of your dialog choices. So if I wanted to diffuse a volatile situation by saying something to calm everyone down, I couldn’t do it if my mood was in the red because the main character is unable to control her emotions like a normal person apparently. Anyway, this was a minor inconvenience, but anything that restricts player choice in a story-based game is never good. 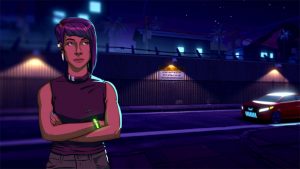 The mystery of Neo Cab begins when your friend texts you asking for an emergency pickup, but then doesn’t show up. You find her broken phone, but no sign of her. For much of the rest of the game, you will be trying to make enough money to survive since you don’t have a free apartment to crash at anymore, and also investigating what happened to your friend. 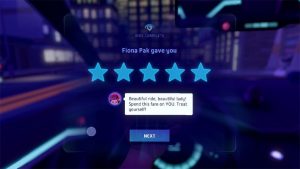 As with Night Call, in Neo Cab you only have so much time to make money and investigate events during your shift each day. Neo Cab however is a lot more generous. Investigating leads does not seem to advance the time any, so you can still max out the number of passengers you transport so long as you do your investigations before you pick up the last passenger for the day. The money system in Neo Cab is also fairly done. If you work hard, you should have little problem maintaining your vehicle and getting a cheap place to sleep at night. There are also some story arcs that could lead to bigger paydays. You should not get too stressed out about the money mechanics. With just a little bit of effort, you can easily concentrate on the story, which is well done and interesting. 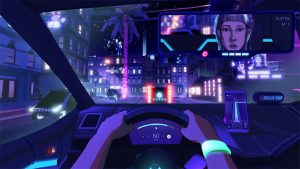 Graphically, Neo Cab looks good. It’s not amazing by any means, but at least it has its own, unique style that is very modern, neon colored and sci-fi. The sound is pretty dull however. There is no voice work, so expect a lot of reading. And the music tracks that play as you drive around are generic, but at least they stay in the background and out of the way. 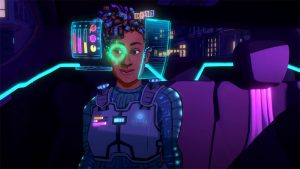 You can complete Neo Cab in about three or four hours, and if you like story-based or narrative focused games then this one is quite good. It’s able to tell a nice story in a surprisingly relaxed way. You wont feel like you are in a Telltale game where you have to quickly decide who lives and who dies for example. It’s also very PG without too much in the way of adult content. It’s probably not quite right for very young players, but okay for teens and preteens. There is also some degree of replay value, as you could pick up different passengers on subsequent playthroughs.

Neo Cab is being offered for under $12 on Steam, which is a great price as Neo Cab is definitely worth taking for a spin. Hail this taxi if you are in the mood for a good story told in an interesting way.