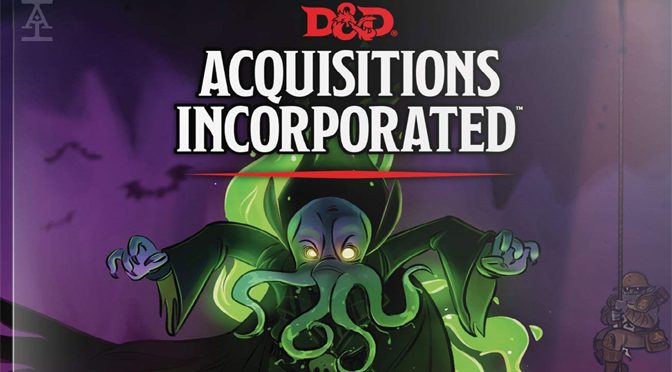 Most of the time, when we review supplements for Dungeons and Dragons, it’s pretty straight forward. They often offer new adventures, interesting characters and sometimes new mechanics like the ship to ship combat introduced in the Ghosts of Saltmarsh supplement. Acquisitions Incorporated is different in that it almost offers a whole new game world, and even breaks some of the well-known rules that we have come to expect from the D&D system.

The Acquisitions Incorporated gamebook is based on the podcast, streams, comics and role playing shows of the same name put on by the crew at Penny Arcade. If you are not familiar with any of that, then you are probably going to be left out of a lot of the jokes the guidebook makes, though you can still make use of the “adventurers as a corporation” system at its core. It would be helpful for anyone who wants to add running a business into their campaign world. In a sense, it’s a little bit like what the Pathfinder: Kingmaker game did for that system, only instead of combining adventures with country building, here you are mixing in things like managing a business, producing marking campaigns, corporate espionage and even sabotaging competitors, all in a rich fantasy setting. 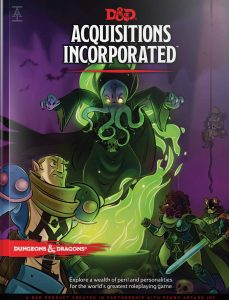 That said, Acquisitions Incorporated is all about humor. And not subtle humor either. The supplement does everything it can to inject its brand of in-your-face funny stuff at every turn. For example, in the character generation section with the new (or heavily modified) D&D characters, the book provides ten silly slogans for each character that players are encouraged to yell at every opportunity. Some are kind of clever, like “You are the loveliest hag in the coven.” Some require a little bit of thought like “Your intellect is as deep as a Tenser’s Floating Disk.” And some are just borderline annoying, or perhaps slightly over that line, like “It’s always darkest before the dawn, except when the moon is full. So let’s moon!”

The entire supplement is designed to add a deeply snarky sense of humor to your game. The running joke is that corporations in real life are basically evil, so if you put them into a fantasy setting with magic, monsters and mayhem, they would really go all out and be quite egregious in their activities. It’s kind of a running joke that permeates those aforementioned streaming shows and comics, and the Acquisitions Incorporated guidebook tries to define how you can make a campaign just as wacky and irreverent as the ones put out by the Penny Arcade crew in those properties. 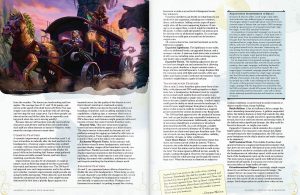 To accomplish this, the book takes many of the typical classes we all know and changes them around significantly so they fit into this setting. So a paladin, for example, is probably the most unfunny character class in D&D. Here, instead of an uptight and chaste warrior, the paladin is a wage slave with transitory morals, perfectly devoted to protecting and honoring whoever is paying the bills that week. In other cases, the powers remain mostly unmodified, but are changed to make them more humorous in various ways. For example, monks stances in Acquisitions Incorporated include the Incontinent Elder, Happy Harpy and Addled Adder, with descriptions if you want to act them out while you play. Lots of spells and special abilities are also added, with the same irreverent flavor as everything else in this supplement.

[amazon asin=0786966904&text=Try something different with your D%26D campaign with a copy of Acquisitions Incorporated from Amazon!]

In addition to explaining how to create such a wacky, corporate-dominated world for your D&D campaign, there is also an adventure that helps explain how to make all these elements come together for your new business-oriented adventuring party. The module will take characters from first level up to sixth, and is a pretty good adventure in its own right.

Acquisitions Incorporated is not for everyone. While it’s helpful to know about the streaming shows and other products from Penny Arcade (and hopefully enjoy them), that is not a requirement. What you do need is to want to play or run a D&D campaign that is constantly injected with a kind of juvenile, over the top humor. It’s kind of like playing D&D and acting in a Monty Python skit at the same time. If that describes your gaming ambitions, then you will love this supplement. If however, you prefer a more serious kind of dungeon delving experience, steer way clear of Acquisitions Incorporated, and instead invest in many of the other new, more traditional supplements that Wizards is constantly producing these days.