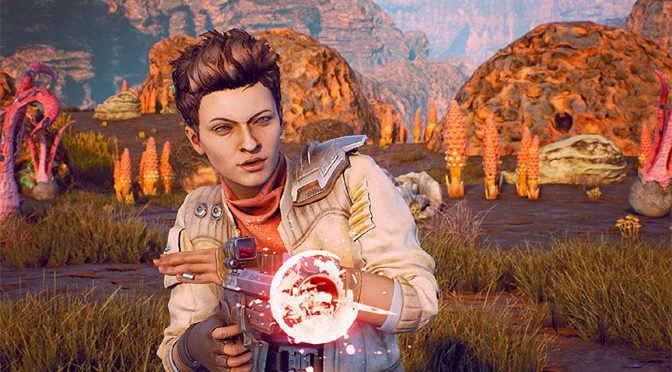 The Outer Worlds might be the sleeper hit of the year. It didn’t get a lot of hype or pre-promotion compared to a lot of games that came out this year. For me personally, even though I’ve thoroughly enjoyed almost everything that Obsidian has created, including deep RPGs like Pillars of Eternity: Deadfire and Tyranny, I really was not expecting too much with The Outer Worlds. But man, they did an amazing job with this game.

The Outer Worlds is a sci-fi RPG played in first person. Comparisons will of course be made to Fallout: New Vegas, the Fallout game that Obsidian created for Bethesda back in 2010. That game took the Fallout series to a darker place, and one which I personally loved, as I felt that the series was getting a bit too comical and lighthearted for an apocalyptic RPG. It’s strange that Bethesda never asked Obsidian to make another Fallout, so I guess they didn’t share my opinion on that darker turn. 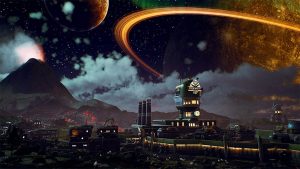 Interestingly enough, The Outer Worlds seems almost lighthearted and cheery, at least on the surface. Everything at first glance is shiny and ultra-modern, like sci-fi writers from the 1950’s used to envision the future. But the truth is that life is hard, brutal and often times quite short for those living in The Outer Worlds, which are planets in a far flung solar system owned by a collection of Earth corporations known as The Board. The dichotomy between the almost lighthearted utopia that The Board seemed to have meant for The Outer Worlds and the reality of the situation is kind of mind blowing. As pleasant as the surface seems to be, the world is actually pretty dark and degraded. 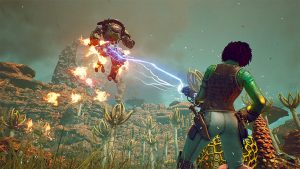 You play a character who has been victimized by The Board, stuck on a colony transport, frozen in a stasis chamber, for over 70 years. Your ship’s skip drive (which lets you travel faster than light) malfunctioned, so your colony ship had to make at least part of the journey to The Outer Worlds using impulse engines, hence the 70 year delay. Only The Board does not know what to do with you once you arrive, so they hide the colony ship in orbit and tell everyone that you are dead. Which, because of the limitations of stasis technology, you kind of are at first.

[amazon asin=B07SWT3C45&text=Grab a copy of sci-fi RPG epic The Outer Worlds on the platform of your choice at Amazon!]

Thankfully for you, a mad scientist type sneaks aboard your ship and thaws you out, which is part of the character creation process. He has special chemicals that will let you avoid rapid cellular explosion death when you revive, though there are some side effects. One of your main missions in the game is to find more chemicals so he can thaw out thousands of your ship mates. 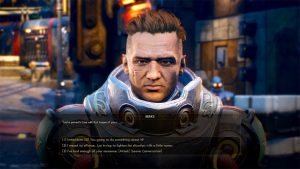 In addition to your main character, you can also recruit up to five companions, and can have two of them accompany you when you leave your ship, which you will also (sort of) inherit near the beginning of the game. Companions are pretty helpful and each one has their own side quests that they ask you to help out with. Part of your available skill tree includes perks that improve your character when fighting alone, but I found that having the companions along was a much better option. Besides the fact that they boost specific skills, they also have great personalities. The things they say to you, each another, NPCs and just to themselves when commenting on the environment is one the best parts of the game. Some of the stuff they say is just hilarious. 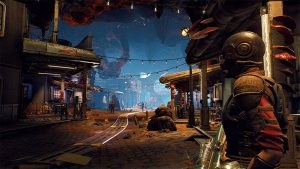 Gameplay is fairly standard for an RPG. You will be walking around in both cities and wilderness areas, talking with people, doing a lot of quests and side quests, and generally have the freedom to play the game however you like. Lots of quests can be solved in multiple ways. Combat is almost always an option, and unlike other games that protect core NPCs, you can actually murder anyone in The Outer Worlds if you really want. Other methods of quest solving include things like using your dialog skills (persuasion, lying or intimidating) to get what you want, sneaking around and picking locks or hacking computers to steal what you need, or cleverly playing various NPCs and factions against one another. Big hammers work sometimes too, though I suppose that is still combat.

Honestly, there were times when I was actually bored just walking around in towns doing low level go fetch quests, but that is to be expected in any RPG. Most of the quests were both sufficiently epic and interesting. 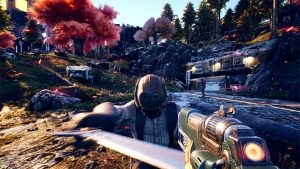 Combat in the game is fluid. You have a choice of ranged weapons or melee ones. Personally, I like ranged weapons so that is what I went with for the most part. I never even put points in melee, though it’s easily possible that you could do things just the opposite and still have a lot of fun. In addition to just normal real-time fighting, you can slow down time, supposedly as a side effect of your prolonged stasis or from the drugs that revised you. Your “bullet time” is a limited and regenerating resource that you can improve with perks as you level if you want. Each companion also has a special move you can order them to perform in combat, anything from a powerful drop kick against a specific enemy to an area-of-effect barrage that damages a lot of opponents. Picking companions whose special abilities complement one another, and your character build, helps to make most encounters quick and deadly. Special companion abilities need time to recharge after use, though perks can reduce this time or even cause them to sometimes immediately reset. 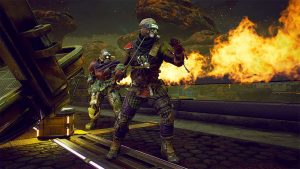 For the most part, the combat in The Outer Worlds is pretty easy. After getting out of the first area and leveling up both my skills and gear, I never really felt pressed too much by the combat difficulty. Part of that might be the fact that I was a sniper as often as possible, and the AI really didn’t know what to do with me killing from extreme range. But even when a lot of bad guys swarmed me, between my upgraded weapons, companion abilities and bullet time, I almost always regained control of the fight quickly. For most players, even novice ones, the normal difficulty level should be fun without becoming too challenging. There is an ultra-difficulty setting called supernova for those seeking harder fights and things like sleep and thirst meters, but that’s totally up to player preference. 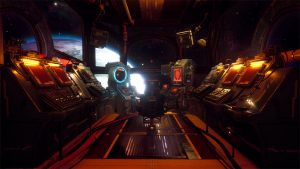 Graphically, the game is gorgeous. Not so much in a Skyrim, every rock has a perfect amount of moss on it kind of way, but more so in a comic book, stylized sort of artistic palette. Gorgeous gas giants hover in place of the sun on some planets, and the eco system is obviously impossible – you should be freezing or boiling or even suffocating on a real planet in similar circumstances. But in terms of sci-fi eye candy, The Outer Worlds has it in droves. In fact, The Outer Worlds looks a lot like what everyone hoped No Man’s Sky would at launch. Only with The Other Worlds, the game actually looks like it was promised, which is pretty amazing. 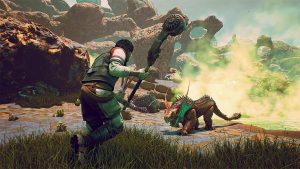 The sound quality is good as well. Companions all seem to have lots of unique dialog, only repeating the same slogan when you order them to perform their special ability. All NPCs are voiced and there seems to have been a lot of good voice actors recruited for it. There is also a nice soundtrack where each town or area gets its own theme. I swear that they are reusing some music featured in Borderlands and Mass Effect at different points, but it all sounds good regardless. 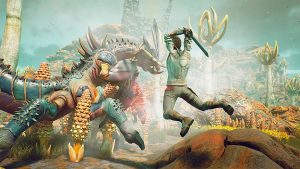 The Outer Worlds is a really fun game. It might not have quite as much content as a so-called triple A title would, but it’s an enjoyable experience that is one of the most unique this year. Fans of RPGs and sci-fi should put The Outer Worlds on their must-play list. It’s a solid, spacefaring adventure RPG with a unique world and flavor.

The Outer Worlds earns 4.5 GiN Gems, and I would be surprised if it doesn’t pick up at least a few nominations for Game of the Year.

2 thoughts on “Stupendous Sci-Fi in The Outer Worlds”