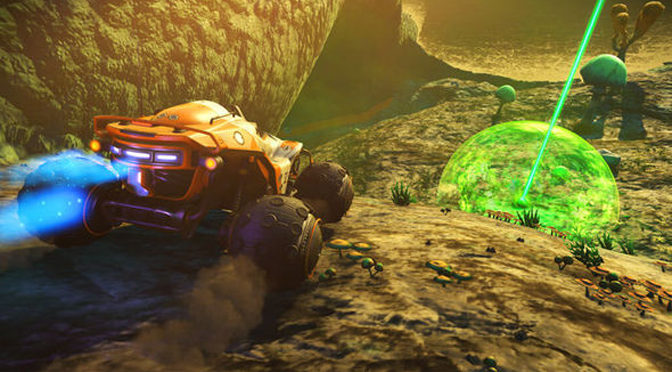 As we recall in my last column, I mentioned about how I planned on giving No Man’s Sky another try after the Pathfinder update came out. The original intent of my second chance was to see what improvements they made to the game, as well as how it would run on my PlayStation 4 Pro.

More importantly, would the game keep my interest even with new titles such as Mass Effect: Andromeda released?

Anyway, let’s go over what I think of the Pathfinder Update changes. We’ll start with how well it performs. I’m going to start off by saying my initial impressions are quite good. Compared to when I first played No Man’s Sky on my GTX960M laptop, the planetary frame rate has improved greatly. Even when playing the game in 4K, it ran between 30 and 40 frames per second. However, running at 1080p increased the frame rate to around the ideal 60. Yes, there were some anomalies. The best example of this came when I mined Emeril from a planet’s surface. There the frame rate took a nose dive to about 10-20 in 4K mode. I haven’t had the chance to test it out in 1080p mode, however.

As for visual improvements, again I cannot compare directly with the original PS4 version as I played the game on PC, but what I did see was a lot more detail on the planet surfaces, on my ship, and even in the wildlife. The wildlife itself has become a lot more abundant than what I experienced before. Previously I would only see a few creatures at a time, but some of the planets I have been on lately have been teeming with tons of life.

Life has also taken on a whole new meaning in space. Before I was lucky enough to get in combat once in a while, but now it happens all the time. I’ve even noticed several distress calls from alien freighters that allowed me to land on them, collect rewards from, and even purchase to add to my inventory. I might not have enough credits to buy one of these freighters yet, but I’m sure I will definitely get one once I do, as well as a way to start building my own personal fleet.

[amazon text=No Man’s Sky is on sale at Amazon. Should you give it another try too?&asin=B00ZQB28XK]

Then there is the base building. I admit I touched on this very slightly when the Foundation Update came out on the PC but not too much. My base right now is pretty basic, with only a builder and science terminal constructed. However, I still have not been able to build a ground based vehicle yet. The reason is because I am currently in search for a specific blueprint: a voltaic cell, which I need to build an Exocraft Terminal. I’m hoping to come across that soon but if anyone is able to give me some guidance, just hit me up with a comment.

Another thing I touched on slightly was the way inventory was handled, especially when it came to charging my multitool. Before I had to go to the inventory, highlight the multitool’s feature, select charge, and then select what isotope to use. But now it’s just a simple press down of the D-pad, and then selecting it via a quick menu. Needless to say, it does help out a lot.

Lastly, the biggest improvement for me is there is just a lot more to explore in space. Aside from the increased combat between different freighters, and even managing your own ship, there are now Atlas based facilities to explore as well as several anomalies. It even offers an alternate path to explore in place of the center of the galaxy.

So, I’m going to be honest with you all. I’m really getting back into No Man’s Sky. Considering all the criticism I have given the game in the past, this does show that Hello Games is listening to feedback and doing everything they can to enhance the game experience. I still believe that paying $60 is too much, but if you can find it used like I did then you might get your money’s worth.

But, to finish up, there is the one question I have left. Is it still capturing my interest when other games like Mass Effect: Andromeda are out? To my surprise, yes, it is. In fact, I am finding Mass Effect to be a chore with Andromeda, especially with the addition of those weird Soduku style glyph puzzles, and it makes me want to go back to playing No Man’s Sky instead. I guess tastes change over time, and I prefer doing some casual exploration to solving glyph puzzles.

We’ll see how long that lasts though…