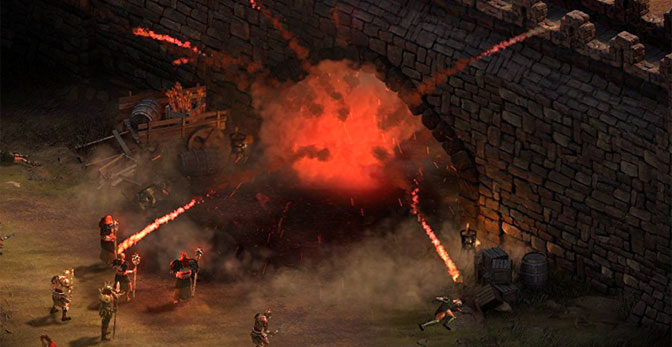 Most role-playing games either make you the typical good guy, or give you some sort of choice as to how you want to play your character. However, I am sure that we have all found that even in those games where there is a choice, the so-called good paths are often much more scripted and fun to play. Obsidian Entertainment’s Tyranny tosses all of that out the window. You are a bad guy in this game, working for an even more corrupt government and enforcing their laws by any means necessary.

The world of Tyranny finds an evil overlord waging war against the rest of the world, only unlike most games, the evil side has already won. The whole world is under the overlord’s thumb, other than one small peninsula which is about to come under siege. That is where you come in, helping to make the conquest complete.

You play a member of the court of justice, which is sort of like a traveling judge who goes around enforcing the overlord’s laws. Technically you work for the head judge, a very powerful archon (all of the powerful deity-like people are called archons) but he, like all other archons, bow to the overlord. You never get to see the overlord because nobody ever does, but he can enforce his will by projecting edicts, powerful long-range spells that do terrible things like create earthquakes and flood over a wide area. Oh, and one of our jobs is to go out and read those edicts, casting them in the overlord’s name. Of course, most of the edict readers don’t come back alive, but so long as you do, you have good job security.

[amazon asin=B01M2BY05J&text=You KNOW you want to be bad! Pick up a copy of Tyranny from Amazon.]

The game begins with a prologue told in storybook style. Here you create your character’s background and history. You also get to make some hard choices, things like burning libraries and crucifying surrendered opponents. These aren’t throwaway choices either. The game world will change, sometimes in huge ways, based on what you do in the prologue. You may find yourself reaping the rewards or constantly hindered by your actions at the very beginning of the game right up until the final chapters.

The character creation is robust, with a lot of skills to pick from. You can pretty much build out whatever type of character you want, from a powerful mage to a sneaky thief to a melee fighter or anything in-between. Skills improve with use, so you can morph into something else as you play by simply doing new things and earning experience for it.

The main game is played in a top-down isometric view type of interface which very much reminded me of the classic Baldur’s Gate series. Combat is fast and thrilling, but you can also pause at any time to give orders, so you can approach each battle tactically if you choose. That is probably the only way to beat some of the higher-level encounters. A few of the boss battles went on for a good fifteen minutes for me, and were touch and go at times.

The gameplay is a mix of exploring cities, towns and outposts and doing role-playing type of quests, judging people for their crimes and things like that, and going out on combat missions or into dungeons. It’s a great mix of cerebral and bloody action. You will also recruit several followers as you adventure, who will travel with you out of either respect or fear, however you want to cultivate the relationship. There are advantages to doing either, and even bonus powers when you raise a companion’s fear or respect level high enough. I was able to get most of my people to like me and fear me, though earning respect is harder than generating fear.

The story for the game is, for lack of a better word, amazing. While it starts off in one direction with you as a cog in the evil wheel, you slowly gain power and influence and become involved in a plot that will, if you so choose, change the world. And, it’s so refreshing to find a game where your choices actually do matter, and not in a Telltale “she will remember that” type of way with no obvious effects. For example, I made a bad choice at the beginning of my first playthrough and it haunted me for almost the entire game. People in the game that I came to admire or even like were later killed, sometimes in horrible ways, because of that one bad choice I made at the start of my career. Think long and hard before you do anything in Tyranny, because you will feel the effects afterward for a very long time.

Interestingly enough, I was able to play a mostly good character even in this world designed for evil. Some of my companions even got annoyed with me because I wasn’t evil enough. I wouldn’t do things like force our prisoners to beat each other to death with rocks, so some questioned my leadership abilities. It was kind of funny in the moment. But by all means, go the pure evil route if you want. The game will fully support you.

Tyranny is a refreshing twist for the old RPG genre. Beyond just the fact that you can truly play an evil character if you want, is a really solid game that hits all the right buttons. The plot is really well crafted. The characters all seem realistic. Combat is fierce but fair. Player choices truly matter. And there is a ton of replay value because one or two choices can totally change the world, making subsequent playthroughs almost feel like completely different games.

Good and evil players alike should find a lot to love in Tyranny, one of the best RPGs we’ve played all year.