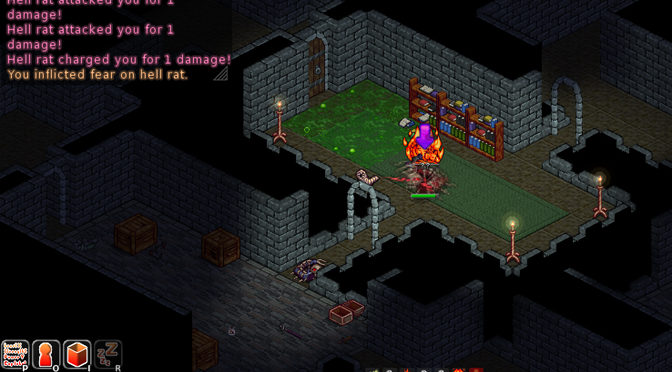 Yet again my gaming needs were filled this week with a developer that offered me a code for one of their games. This one is called MidBoss. Actually, I got this code about a month ago when the game was still in its beta. Since the release date was already so close, I figured it would be best to just wait until then to actually talk about it, and now I can.

I’m glad that I waited until its full release do a write up on MidBoss. Don’t get me wrong, I love checking out games in their early builds because it lets me see all the potential, but some games are so close to complete that it just makes sense to give them a full review. MidBoss is one of those games.

The story of MidBoss starts out with a couple of goons in a dungeon heckling our protagonist. See, Boss is just an imp that helps set up dungeons before the heroes get there. Mid is his humorous flame companion that acts as the hint provider for the game. Together the two decide to use the distraction of a hero entering the dungeon to better their lot in life.

When I say that Mid and Boss want to better their lives, I really mean it. They are determined to rise up through the ranks of monsters until the dungeon belongs to them. However, the two aren’t exactly all that powerful. It is lucky for them that Boss holds the special ability of being able to possess monsters.

Possessing monsters in MidBoss is how the player moves forward in the game. However, it isn’t as simple as it sounds. Monsters have to first be hit with the possession spell and then they need to be defeated. Only after that can Boss take them over. The game is a turn-based strategy RPG that is most similar to Final Fantasy Tactics. This means that with enough forethought, it isn’t too hard to defeat stronger enemies and progress forward in the game.

Possession in MidBoss starts out with simple creatures like rats and bats, but moves up to more deadly enemies, such as skeletons, and even bigger fiends. When Boss takes over a monster, it starts as level one. Defeating other monsters in the dungeon will earn the player two types of experience. The first is for Boss and the second is for the creature. When a creature levels up, it unlocks more abilities that make it better in combat. Boss’ level ups give him skill points to distribute to his different stats.

To simplify how MidBoss works, it is easiest to think of the different creatures of the game as classes. The classes retain levels even if Boss leaves them and takes over another creature. Also, mastering a class will give Boss their best stats in his base imp form. He can also chose to access the abilities of different creatures both while in imp form and as other monsters. This allows players to mix and match the different abilities to best tackle the various situations they will encounter.

Players will also find loot and gear while traveling through the dungeon. Equipping better loot brings better stats, which makes defeating enemies easier. There are also merchants in the game that players can trade with. They sell items, equipment, and offer some special services. Don’t expect to find much in the way of healing items, though. MidBoss has players do most of their healing by switching to monsters once their current vessel is about dead. It adds to the strategy of the game and can be a bit tough to get the hang of at first.

Being that MidBoss is a Rouge-like game, players will have to start over from almost scratch if they meet their end while traveling in the dungeon. However, the game also includes death cards that players can keep. These death cards show how far the player made it, their favorite classes and how they died.

The real advantage of death cards comes from starting a new game. When doing so, players can chose death cards to use for that run. This will allow them to pick an item that was on them at the time of their death in the run that the card comes from. This can be spell tomes, armor, weapons. Just about anything, really. This is a great feature as it makes it much easier to bum rush through the early levels of the dungeon without any trouble. It’s a good way to let the player start over without truly taking everything away from them. One small note, though, is that a death card can only be used once, and will disappear afterwards.

Death cards have another function as well. This function allows players to link to URLs for image of death cards online. Doing so will let the player challenge the same world seed that the death card came from. It is a neat idea for sure, but I don’t how much use it will really get.

MidBoss presents its world to players via an isometric view. This is common for games of this type and it works well. The graphics are also solid, but not exactly knockout great. However, I really do have to praise the easy-to-understand user interface. This includes the addition of a turn order list on the right-hand side of the screen. That alone is a true life saver. There’s also a C64 graphics option that players can unlock. It gives the game a more retro look, like what would have been found on the Commodore 64. I don’t really have much experience with the Commodore 64, but I can appreciate the nod to retro gaming.

The audio in MidBoss is where the game falls the shortest. That may sound a bit harsh, but hear me out. I’m not saying that the music or sound effects in the game are bad, but they really aren’t great, either. I can listen to the game’s soundtrack all the time I’m playing and not grow bored with it. However, the tunes aren’t exactly anything I remember after shutting the game down. They just aren’t memorable and don’t have much impact. That isn’t to say they don’t match the atmosphere the visuals are bringing, but they do feel a bit uninspired.

Overall, I really enjoyed my time with MidBoss. The Rouge-like elements make it fun to keep play even after long sessions. The possession mechanic and level system also meshes well with the turn-based RPG aspects of the game. It also has good visuals, but the music is a little lacking. Still, the game is a wonderful experience for those that want some challenge in their spare time.

MidBoss earns 4 GiN Gems out of 5!