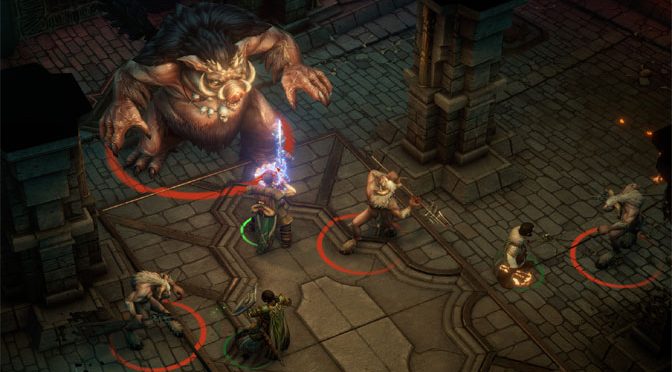 Pathfinder: Wrath
of the Righteous

Epic role-playing games don’t come out very often. When they do, those who enjoy the kind of deep role-playing that keeps players up way past their bedtimes celebrate their good fortune. Pathfinder: Kingmaker from Owlcat games was one such title. It was one of the most expansive, epic RPGs to come out in years. And although it was a little buggy when it first released, the developers eventually smoothed out the rough parts and it became one of the best games of that year, earning a really good review here on GiN.

But as epic as Kingmaker was, it actually looks kind of small compared to Owlcat’s new RPG, Pathfinder: Wrath of the Righteous. 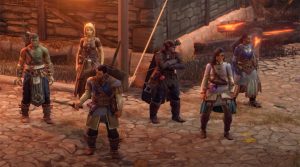 As the name implies, Pathfinder: Wrath of the Righteous uses the Pathfinder rules system, which is probably one of the most popular in the world alongside of Dungeons and Dragons. And Wrath goes really deep into that system. Every single class in the game offers multiple subclasses to play, so you never have to just play a barbarian or a cleric if you don’t want. Whole new classes are available in Wrath as well, including a cavalier class that specializes in mounted combat, which is another new feature. Even the new classes like cavalier have subclasses, so you can become a halfling Order of the Paw cavalier who rides a dog or a wolf into battle if you wish. You might spend hours, or even reset the game a lot just to get the perfect character build. I know I did. 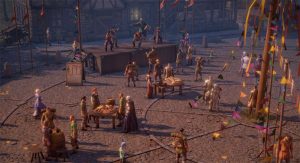 Wrath begins like a lot of traditional RPGs, with the hero showing up just as strange and dangerous events are starting to happen. In fact, the city you arrive in looks a lot like your capital back in Kingmaker on festival day. Sadly for the people who live there, things don’t remain pleasant for very long. The city you arrive in acts as the key defensive link in a magical barrier set around the Worldwound, which is a direct portal to the Abyss, a plane of existence where most of the demons of this world live. Those demons attack on festival day, and your character falls through a giant crack into the underground where you begin to gather a party and start your first adventure. Owlcat and Paizo (the folks who made the Pathfinder RPG system) made an excellent video to describe the Worldwound if you are interested. Basically, if it expands, then demons can invade the entire world.

Unlike Kingmaker, Wrath does a really good job of explaining how the game works to players in the form of pop-ups. This includes a lot of nuanced rules, which is nice. For example, if you equip a magic ring and it shares a non-stackable bonus with another item, the game will tell you. Or if you are missing an opponent in combat a lot, the game might suggest a different kind of attack (like a ranged touch) that might shift combat in your favor, or a feat that could help make your character more powerful in the future. As someone who is not completely familiar with Pathfinder rules, I certainly appreciated it. 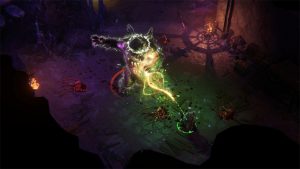 The gameplay in Wrath is really deep as well, and unlike some other RPGs that play pretty loose with their system’s rules (I am looking at you Baldur’s Gate 3) as far as I can tell, Wrath has Pathfinder’s system down cold, much better than me in most cases. Combat defaults to real time with pause as is the norm for most top-down view RPGs these days, but you can also flip one switch and make all combat turn-based. Personally, I love turn-based combat, so it’s great to see it as an option. Especially for a game with interlocking feats, mutually supportive cooperation moves and the need to precisely target certain enemies in such a way as to overcome (or weaken and suppress) their natural damage or energy resistance, being able to precisely plan each and every move is critical. And it makes it much more like a pen and paper game, which is another positive in my book. 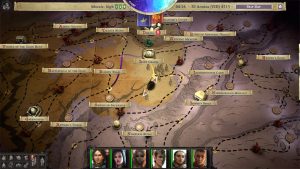 The scope of Wrath is truly epic. Yes, you will be traveling around on a big map like you did in Kingmaker, but also journeying to other planes of existence, demon cities and even a few other surprising places. Even supposedly small missions or side quests seem to end up becoming almost full-scale adventures of their own, which is both surprising and really fun. In fact, some of the side quests are among the best parts of Wrath. In terms of the amount of content, I suppose it’s possible to speed run through the game (though I don’t know why you would want to) but for me, I was way over 80 hours before I even started to think I was approaching the endgame. While it’s true that my turn based combat choice definitely extended the playtime, it’s also safe to say that there is a lot of well-crafted, fully planned out content included in Wrath. You may not even get to all of it in one playthrough.

Another big draw in games like this are the companions, and Wrath of the Righteous has them in abundance. Almost every single character that I met who was willing to join my party was extremely memorable. Some of them were also quite unusual, like a hard-partying paladin who doesn’t take things too seriously, a succubus trying to become a better person or a gnomish hellknight who charges into the fray and wants to win battles at any cost. Even the characters that seem to come out of RPG central casting (like a tiefling thief) have memorable personalities that make you want to keep them in your group for fun if nothing else. 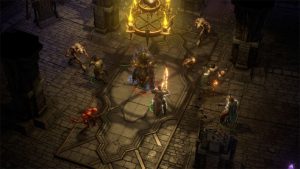 And your character will develop in ways that go beyond most RPGs too. In addition to just your standard levels, you will also earn so-called mythic levels as you adventure. This is a separate system that grows alongside your main character levels and gives you extra powers and abilities that could eventually turn you into a demigod. You just have to eventually choose a mythic path to follow. Most are diametrically opposed to one another, like the angel and demon path. Others embrace the tight enforcement of law or the concept of total freedom. There are also a couple truly oddball ones like the undead path that ends up with the player becoming a near-immortal lich at the end. Any of the mythic paths can help curtail the demon invasion, though people will react a lot differently towards you if you become a fellow demon fighting fire with fire compared to an angel come to save the day. All the mythic paths are interesting, but a few seem pretty overpowered compared with others. They are all fun, but your mileage may vary. 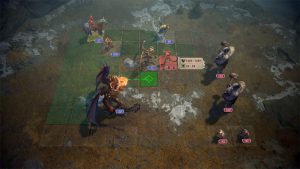 In addition to being an adventurer, you also get to lead the crusade against the demons. As the leader, you will recruit and command armies as part of your new responsibilities. Army combat is done on a grid map that is very similar to the old Might and Magic or King’s Bounty type games. For many players, this may be one of the most difficult elements to master, especially if they are pure RPGers and don’t have a lot of strategy background. From my experiments with the combat system, it seems to be heavily weighted toward brute force tactics and of course numbers. Having a stacks with hundreds of hard hitting, high impact or heavily armored troops is better than teams of elite specialists. As long as you do that, and keep your ranged attackers safe, you wont lose too many fights, though they can still be challenging. 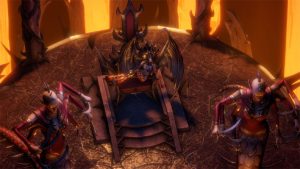 You will also be doing the kind of regional and city management like you did in Kingmaker, though this is no longer the main focus of the game. So you wont have to deal with raiding barbarians or crazy cultists roaming the hillsides and frightening the peasants every other week. And no more major expeditions so that some random blacksmith or tailor can find their missing hammer or comb or whatever. There are also fewer surprises in this part of Wrath compared with Kingmaker. For example, when you make a royal decree, each and every possible outcome is spelled out for you. So you won’t get completely different results than you anticipated when you enact a new law or policy. 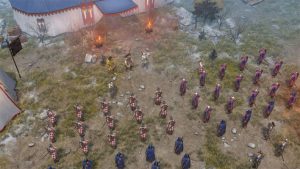 Finally, I did need to mention that bugs are present in Pathfinder: Wrath of the Righteous. They are not as bad as when Kingmaker launched, but they do exist, and there are a lot of them. The most frustrating example for me was with the new mounted combat feature, since I was playing a dog-riding cavalier halfling. About 30% of the time in turn-based mode, the game would confirm that I could make a charge into battle, only to have my dog get hung up on a nearby fence post, table leg, rock outcropping or just some invisible thing sitting in the way. The dog would spin his wheels running in place for about five seconds and then my turn would just end without attacking. In tight fights where victory is anything but assured, missing out on a turn because of a game error is no fun at all. I am sure it’s something Owlcat is working to fix. 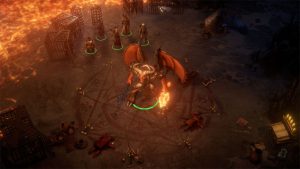 This review of Pathfinder: Wrath of the Righteous is getting a bit long, probably because the game is so huge. So I will wrap things up. Pathfinder: Wrath of the Righteous is one of the most fun RPGs that I have played in years. Yes, there are some rough edges, but overall, this is an epic RPG that is not really too much like anything that has come before it, with the possible exception of Kingmaker. You will be losing a lot of sleep with this one, and hopefully loving every minute of that experience.