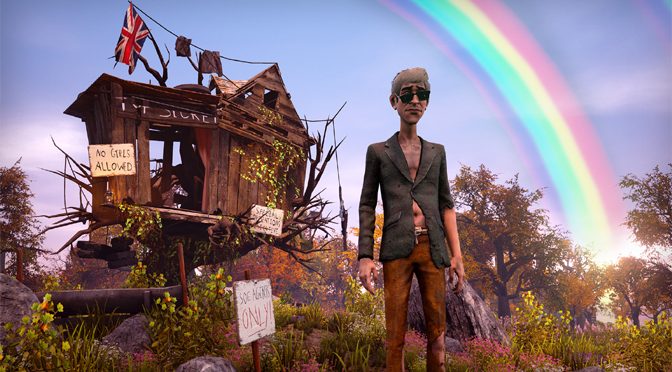 When Gearbox Software was developing We Happy Few, they promised us a unique game experience and world that was unlike anything that had gone before. It’s easy to say now that they kept that promise, although the difficult gameplay and the emphasis on brutal melee fighting instead of ranged combat (which most games with shooter interfaces favor) make the game a bit of an acquired taste. It’s a quality title for sure, but may not be everyone’s cup of British tea. 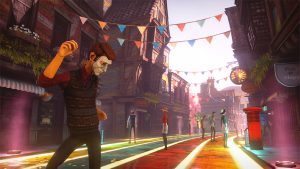 The game is set in an alternate history England, around the 1960s. In this world, Germany (though not Nazis, just a German empire) conquered and occupied the United Kingdom during World War II. The Germans did not stay too long, as they needed to leave in a hurry to face the Russians, who were steamrolling toward Berlin. Before they left however, a somewhat implausible plot twist has them tricking the British into giving up all their children under the age of 13. Why the Germans wanted these children isn’t ever explained, which is disappointing in a game that purports to be heavy on plot. But the children never come back home, and society pretty much breaks down after that. 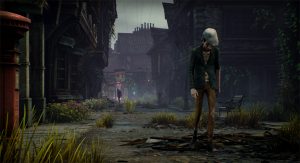 There are other events in the overall game world that players are not directly privy to, but the rumors are that a plague has killed most of the world population that war and famine didn’t get around to eliminating yet. England has reverted to life within a series of walled villages or boroughs, with some in vastly better shape than others. The secret weapon the government uses to maintain control is a drug called Joy, which makes everything seem wonderful once taken. It’s basically Soma from Brave New World if you read that book, only it serves to make people happy and compliant, so a bit more than a mood elevator. People voluntarily take it because they want to forget giving up their children, and once you are hooked on Joy, getting back off it has serous withdraw complications.

Joy also erases a user’s long term memory. You even have a stat for this on your character, so you know how much of your past is lost. You will play three characters in the game, with each one having a chapter all to themselves. They interact with one another in cut scenes some, acting as NPCs to the other character’s stories. So Joy is the backdrop to pretty much everything. 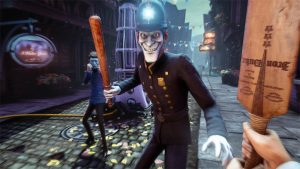 You begin playing Arthur, who works in an office that sensors newspapers. Your job is to only allow happy news to reach the public. When you run across a story about your missing brother (he was one of the kids taken away by the Germans almost 20 years ago) you are jarred back into a painful reality. At that point you have a choice. You can take more joy and the game will end right there, with an interesting montage that you should probably check out at some point as it explains a little more about the world. Or you can stay off joy and try to pass as a happy person, and not get labeled as a “downer” which is pretty much the worst thing you can be in this world – someone who is off their meds.

[amazon text=Take your Joy! Get a copy of We Happy Few from Amazon!&asin=B074RNLTXY]

There is a highly unique gameplay mechanic involving Joy. When you are high on the drug, everything looks amazing. Butterflies are circling around. There are rainbows in the sky. Everyone looks beautiful. The town and wilderness is well-maintained and colorful. It’s really nice, and looks better and better the more Joy you pop. But it’s not real. 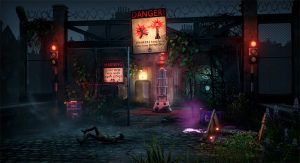 When you are off your joy you see things as they really are. Right at the beginning your co-workers are pulling apart a dead rat and eating its entrails. If you are on joy, it looks like a piñata dispersing colorful candy. But the drug-free mind sees the gruesome scene as it really is. If you don’t want to lose your mind to Joy, this is how you will experience most of the game. There is actually a third state when you are suffering Joy withdraw. During that time the world actually looks worse than it really is, like something out of a Cthulhu game, though this is a very temporary state, only visible while you are coming down off a Joy high. 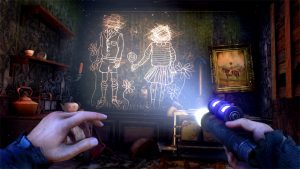 There is a lot of content, including side quests and lots of hidden missions, and that is just when playing Arthur in the first chapter. With over 40 hours of gameplay, or more depending on what you do, it’s fairly clear that this was originally the core game. The other character chapters are good as well. I particularly like playing Sally in chapter two because of her, let’s call it unique, need. And Ollie in chapter three is pretty much the comic relief that this sometimes-a-bit-too serious game needs. So, expect a lot of content and bang for your buck. Nobody should be complaining that there is not enough gameplay. 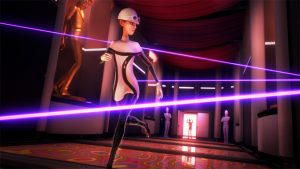 The world of We Happy Few is not quite an open world, but the levels are very large and feature numerous hidden things to find, and even hidden adventures, dungeons (or their equivalent) and quests. The game does a good job of alerting you when you stumble upon one, but many are not otherwise advertised. So if you go out and explore, you will very likely be rewarded with some unique and sometimes crazy side adventures. The various levels are separated by bridges that are guarded and often locked down, and your storyline quests normally involve finding a way to get across them. Once you do, if you locate the old subway hatch, that can act as not only a base of operations where you can safely rest in the old workman’s offices, but also as a fast travel point allowing you to revisit any town or area where you have also located the underground. 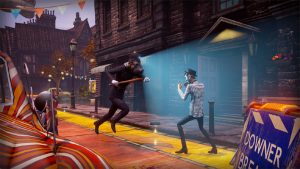 If you check the GiN scorecard above, you will see that we have We Happy Few listed as Hard for difficulty. This is compared to the average shooter. The reason is because there are no real ranged weapons in the game other than rocks which do little damage and things like grenades which are powerful, but which must be crafted using somewhat rare components. Most fights are thus hand to hand, melee affairs, and they can be brutal. If you are discovered breaking a law inside a town, the entire place including every citizen in sight and quite a few bobbies (the cops) will pile onto you. Yet despite the emphasis on melee combat, you don’t really have any special moves like in something like Assassin’s Creed. It’s pretty much just swing or block. And bashing someone to death or knocking them out with a frying pan isn’t easy, especially when their buddies are surrounding you.

It’s probably better in most cases to avoid combat. The game pushes the stealth angle, and every character can takedown someone who is unaware of them if you sneak up from behind. Here too though, as in combat, the stealth mechanic is not really flushed out. You don’t know how hidden you are or how stealth is calculated. I’ve had guards in one area spot me creeping from across the room or down the street. Other times, I was able to maneuver literally between about 10 guards and nobody spotted me at all. But I don’t really know why it worked in one case and not the other. 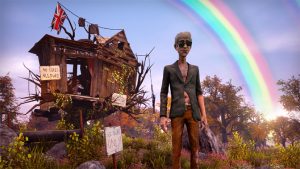 Crafting is the final element of the game that can be a little tricky. You basically have to find recipes to make almost anything from lockpicks to flame-throwing umbrellas. And then you need components, everything from wooden splinters to metal shards and empty bottles to heaps of charcoal. Thankfully the game provides pneumatic tube storage in all of your subway hideout fortresses and your home (if you are lucky enough to have one). The storage is unlimited, and you don’t need to be beside it to craft. I guess the components are beamed over to you. Given how much you need to collect and how important weight is in this game, this addition was likely necessary if anyone was going to enjoy the crafting side.

In the end, We Happy Few offers a unique if brutal world with a groovy 1960’s happy facade hiding a dark and totalitarian regime just below the surface. There is a ton of content to discover, and the characters and storyline are both pretty interesting. Playing We Happy Few might not be as enjoyable as popping a Joy, but it’s a rewarding experience and a pretty fun game, especially if you don’t mind a little bit of difficulty.