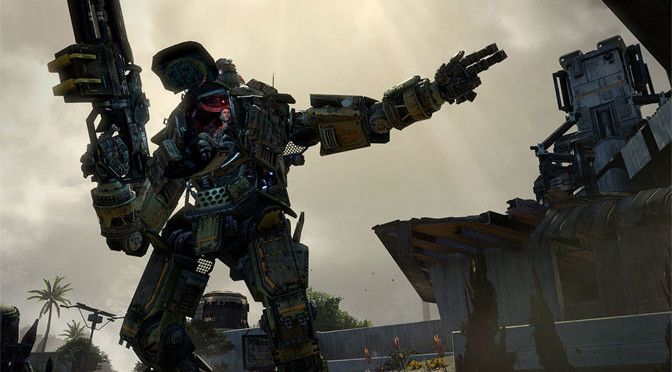 You all know me. I try hard to get into online multiplayer first person shooters. But it’s so hard to get into them when you are grossly overwhelmed by higher level players. I tried going through it with Call of Duty, and you all know my long journey with trying to get into Battlefield 4, but every time I try to play, it’s the same old story. Start off the game, get shot by a well hidden camper. Respawn, killed instantly by a spawn camper. Lather, rinse, repeat.

That’s why I was worried about Titanfall. As it too would be an online shooter, I had my fears and doubts about what the game would be like. Would I have to suffer the same issues that I went through with CoD and Battlefield 4? Even more, would limiting matches to six versus six human opponents with AI NPCs ruin the experience? Fortunately I got my hands on the beta before the game came out, and it helped to remedy any doubts I had.

But they would not prepare me for how the final product would turn out. For once, I am happy to say that there is an online multiplayer shooter I can play that is accessible to anyone, without fears of being outgunned by those who play almost nonstop.

At the time of writing this review, I have spent nearly 20 hours playing the game online, and am currently at Level 48. Never before in an online FPS have I ever played this long without getting burned out. Even with the limited gameplay options, that I will get to, I still came back for me.

The story of Titanfall is quite limited, as is the campaign mode it’s based on. In short it’s the standard underground militia force fighting to control what is known as “The Frontier” against the oppressive IMC. The story centers around the Militia leader who formerly was allied with the IMC and their attempts to recover critical targets from the IMC, all of which take place over nine missions. Each of these missions must be played as both the Militia and the IMC in order to unlock the other two Titans available (the Ogre and Stryder, in addition to the default Atlas.)

But the campaign mode only gives a taste of two of the game’s five modes. One mode is called Attrition, which is basically a team deathmatch where the first team to get 300 points wins and controls the territory, while the other one ends up retreating to a dropship for extraction. The scoring system is where the NPCs come into play. There are three levels of trooper: human grunts that score 1 attrition point, robotic Spectres worth 2 points, and human controlled “Pilots” that are worth 4 points. Pilots are the only units that can summon and control Titans.

And there is where the genius of Titanfall’s gameplay comes into play. Each pilot has a countdown clock until their Titan can be dropped. Starting at four minutes, hunting down grunts and Spectres, as well as other Pilots, rapidly decreases the timer. In doing so, this encourages Pilots to run and gun, and decreases the desire to stay in a hidden spot and camp others. I commend Respawn for coming up with this idea.

The other game mode used in campaign is Hardpoint Domination, and it is the usual “control three key areas” gameplay we have been used to since Battlefield came out.

Outside of the campaign, there are three additional modes available. Capture the Flag is what you expect in every FPS you have played. Last Titan Standing is just that, where every Pilot starts in a Titan, and only has one life until there is a sole survivor. Then there is Pilot Hunter, a modified version of Attrition that only counts pilot kills to the overall score.

Titanfall uses the same ranking system we are used to in CoD, allowing perks to be added with each new level. There is also the ability to prestige a Level 50 character up to 10 generations, each of which earns XP at a faster rate.

Also at the start of each battle, pilots can select up to three “burn cards” to use in the round. These cards provide boosts such as amped weapons, longer lasting special abilities, an instant Titan, or a heavy drop in Titan development time. Thankfully these cards must be earned during combat, and in a very smart move by EA, one I never thought I’d ever see from them, there will be no microtransactions! That’s right, no one can buy the higher end cards. They must be earned. Again, thank you EA!

And in another smart move, one I criticized in past Call of Duty games, matchmaking is finally balanced. Sure there are some anomalies, but I’m glad to see that I’m not going up against a team of Level 49 Generation 8 pilots. I hope this is the start of a trend.

I never thought I’d see the day I’d be enjoying an online FPS as much as I have with Titanfall. Even with its limited modes and stages, I can only see the game getting better over time. Titanfall is worthy of all its praise!

(Reviewer’s Note: The review scores above correspond with the Xbox One and PC versions of TItanfall. For the Xbox 360 version, lower the graphics rating by 1/2 Gem)

Pros: Finally, a fun multiplayer shooter that is accessible to everyone. 6v6 action feels just right. Titan-based combat is entertaining. The addition of balanced matchmaking is a much needed plus. NO MICROTRANSACTIONS!