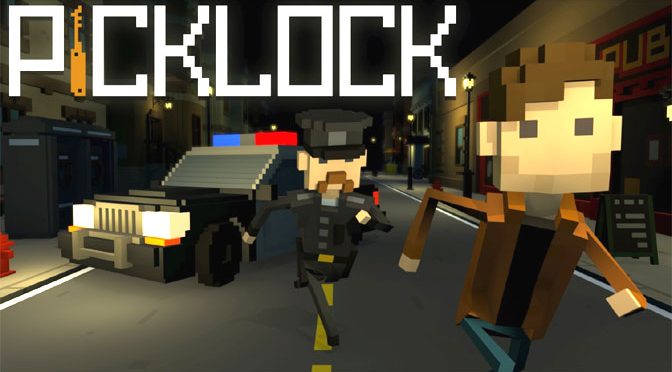 One of the things that I like to do whenever I have time, which I have far too little of these days, is to troll Steam looking for interesting or undiscovered indie games that might be worth giving a try. I did that a while ago and ran into a game called Picklock from developer Deqaf Studio, and then it languished in my games folder for far too long. Now, Picklock is moving to the Nintendo Switch, where our Modern Gamer columnist might pick it up, so I figured I better hurry and get it reviewed. 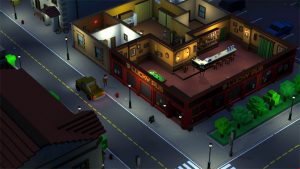 And I am glad that I finally was motivated to give Picklock a try. It’s a fun little game with a lot of heart. It’s a little on the shorter side, with only about four to six hours of gameplay, but has a lot of nice little extras and a few surprises. It’s worth way more than the sub-$10 price its being offered for on Steam. One could even say that it’s a steal.

There is not too much in the way of story in Picklock. You are a thief of some skill who has decided to go straight in a smallish town or city. We don’t really know why your character changed his lifestyle, but it’s clear from the start that he is unhappy living a normal life with a 9 to 5 job. The funny thing is that he says his life is a mess, but he’s got a relatively nice, if small, house and a pickup truck, so its not like he’s starving or anything. But he just can’t seem to let his thieving ways go.

That is fine with me. I love thief type games, with the classic Thief game at the top of that list. And although there have more than a few not so good stealing-based titles over the years, quite a few have been fun to play. Heck, with most open world games like Skyrim or even The Outer Worlds I end up playing a thief-like character. At least in Picklock, there is no ambiguity. You are there to steal stuff to support your ultimate goal of raising a million dollars and buying a beach house. Okay, lets see how Picklock, which is also our main character’s moniker, will get the job done. 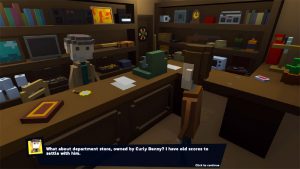 After a brief tutorial level where you rip off your neighbor’s house, something a real thief probably would not do because it would lead the cops in their direction, you are given missions by your contact at the local pawn shop. You are given one mission at a time, and each has, for the most part, increasing difficulty. You will have to deal with things like guards, police officers, cameras, electronic locks, safes and other hazards as you try to earn your way to that beautiful beach house. 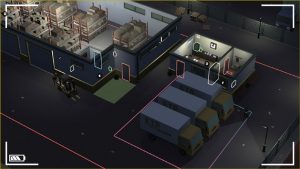 Picklock is played in real time with guards and other people wandering around inside the mission zone following a pattern. Your thief has a drone which supposedly allows him to see everything happening inside the mission. The game basically maps everything out for you. So you know that a guard will stay in the break room for 18 seconds before making his rounds, stopping again for 11 seconds at a vending machine to grab some chips. He will do that same thing again and again forever. Your job is to sneak past him and start picking up the highlighted valuables.

Your thief is no fighter. If you get spotted, then the guards will break their pattern and come after you. If you trip an alarm, not only will the local guards break their patterns and try and find you, but police are called from outside to assist. Basically, if you get spotted, it’s pretty much time to restart the level, because your thief can be knocked out in one hit. This makes the game kind of like Desperados III, but with far, far simpler levels. 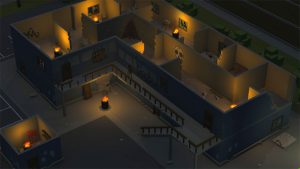 It’s easy to tell how close you are to completing a level as it keeps a running total for both money and stolen items. You can leave a map at any time, but if you want to get the most out of this profession then try to get both meters to 100% before you leave the level, which you do by selecting your vehicle. Your thief then hops in and drives off, and you get whatever rewards you have accumulated in that level. But really, you should try and get 100% every time. 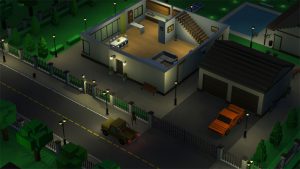 The one complaint I have is with the controls. You have to rotate the playing field so that you have a clear and unobstructed view of the space you are moving toward. So let’s say I know that I have a few seconds where my thief has to move to a bathroom to wait out a guard’s next patrol cycle. If you are not hovering over that bathroom, then you can’t click on it, so you can’t click on that area through a wall even though you know you want to go there. Instead, you have to rotate the map to be looking right at the destination spot, which wastes precious seconds because the world keeps moving while you are positioning. That led to a few fails until I figured out the interface’s quirks.

Surprisingly, Picklock has some amazing music. It has a high-quality jazz soundtrack that is fun to listen to and sets the mood for the various missions. There’s no voice work or anything like that, just a couple simple sound effects like when you jimmy open a door or start up your vehicle. 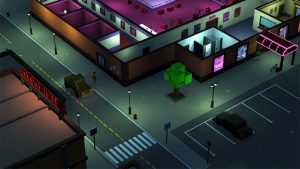 In addition to the missions, you can also visit a pub and a strip club to pass the time. Both simply show you a non-interactive cut scene of your thief drinking at a bar or sitting in a private room watching a pixelated woman in a bikini dance for you. In addition to saving up for the beach house, you can also upgrade your current home with new furniture and buy new vehicles. I would avoid that if at all possible as they don’t contribute to your thief’s happiness or provide any bonuses at all, but do take away from the goal of getting enough money to retire. I guess it’s cool from a role-playing perspective, but there is only so much money to steal in the game, so you have to be a little frugal.

Despite it’s simplicity, I had a lot of fun with Picklock. If you like the timed gameplay of having to move around levels with precision down to the second, then you will like the game. It’s a cute and clever little title that is good for stealing a few hours of your time.