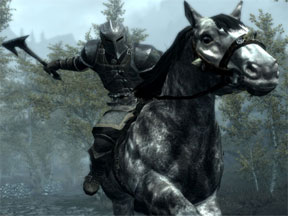 Wait, maybe I should go more into detail on that. When I grew up I dated someone who was obsessed with vampires, and it really started to creep me out. I never got into movies such as Interview With the Vampire, nor did I read any of the Anne Rice books. Granted, I took a slight break from that stance to become a fan of True Blood. But for something good as that, at the other end of the spectrum comes in the dreaded Twilight series.

But as far as the Elder Scrolls series is concerned, I’ll be blunt about it. I freaking HATE vampires.

Since contracting Porphyric Hemophilia during my first run of Oblivion, having to deal with being a vampire was one of the most frustrating experiences in the series, especially when I didn’t know what was wrong with me in the first place. I even thought it was a bug in the game. I spent an entire night just trying to complete the Cure Vampirism quest so I never had to suffer through that again, not to mention exploiting a (pre-patched) infinite gold bug that made finishing the game much easier. But since then I knew I never wanted to become a vampire ever again. That vow carried over to Skyrim, and I swore never to suffer from Sanguinare Vampiris. It never happened to me.

But now the first DLC for Skyrim, Dawnguard, is making me face my fears once and for all.

Dawnguard centers around the Vampire Lord, Harkon, and his attempts to use the Elder Scrolls to block out the tyranny of the sun. A group of vampire hunters called the Dawnguard swear to stop him.

When the player meets with the Dawnguard at first, they are sent to a crypt where players will encounter a female vampire named Serana. It turns out that Serana is Harkon’s daughter, and when returning to his home, Castle Volkihar, Harkon gives you the choice to become a vampire lord or not. For this review, I will say that I took the role of the Dawnguard so my quest was to locate a mysterious weapon that is used to slay Harkon once and for all.

But when becoming the Vampire Lord, it also allows access to the new Vampire perk tree, with new abilities such as turning into a regenerating mist or having a swarm of bats feed on your pray. That’s not bad bit of advantages if choose the darker side of (un)life.

For those who are werewolves and thus can’t turn into a vampire, a separate perk tree has been added to increase physical damage or the ability to feed and heal yourself.

The world of Dawnguard also features a new ethereal plane called the Soul Cairn that can be explored. But sadly the missions here were just a set of dull find the item quests that I was happy to get done with afterwards. It did become an exercise in tedium.

But when I got back to the regular world, it felt like the Skyrim I knew and loved, only this time with a new weapon, the crossbow. I admit I am not much of an archer, but felt quite at home with the crossbow. It’s almost necessary when fighting vampires, and the best way to avoid Sanguinare Vampiris. Also, though I never used a horse when playing, mounted combat is available as well.

The only problem I noticed when it came to combat and the new campaign is that the only new creatures that I am up against now are vampires and gargoyles. Sure there were a few skeletons and some Chorruses but I was hoping for more. Oh well, I know more DLC will be on the way soon, and I’m looking forward to it.

The main Dawnguard quest clocked in at about 10 hours, and aside from the Soul Cairn was quite enjoyable to play. At 1600 Microsoft Points ($20) though, it might be a little on the pricey side. But if I compare it to the past DLCs I played from Bethesda, it ranks alongside that of The Pitt or Point Lookout rather than the more tepid releases such as Operation Anchorage or Dead Money.

Still, I’m hoping that Skyrim will get its own equivalent of the Shivering Isles soon.

Dawnguard is available right now for the Xbox 360, and will be out soon for the PS3 and PC (perhaps as soon as this review runs).

PROS: A decent 10 hour campaign that can branch out into two main storylines. Addition of crossbows and new settings to explore. New mounted combat. Finally I can get even with vampires once and for all. Two new perk trees for vampires and werewolves.

CONS: The Soul Cairn environment can turn into a chore. Not much new to kill aside from vampires and gargoyles. Somewhat pricey for what you get.