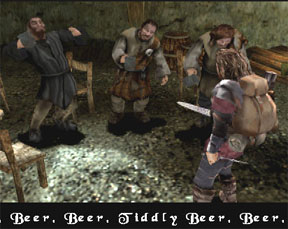 It’s not very often that we find a game that marries clever humor with a good story. Most role-playing games either take themselves too seriously or degrade into mindless click-fests where the only goal is to slay the next monster again and again and again.

That won’t happen with The Bard’s Tale because in addition to having a pretty detailed plot, the game is chocked so full of humor you will at times think your television has accidentally slipped off your game channel and over to a Saturday Night Live broadcast. The game borrows jokes both liberally and subtly from such diverse sources as Monty Python, Scooby Doo and Highlander in addition to having a lot of original humor.

To give a bit of flavor to this, even the game’s Website at Thebardstale.com is pretty funny. When you click on the picture of the tavern wench at the splash screen she will slap your cursor away from her chest. If you persist, you will be linked to a national sexual harassment organization’s website.

One of the coolest aspects of the title is that the main character in the game, an enigmatic figure known as The Bard, often gets into heated debates with the narrator of the story. It helps that both parts are played by top-notch actors. The Bard is voiced by Cary Elwes of The Princess Bride movie, and brings exactly the right touch of jaded sarcasm and razor wit to the part. The Narrator is voiced by veteran voice actor Tony Jay, who has been in over twenty computer games on multiple platforms. He does some of his best work here and you can tell he really had a good time with the role trading witty jabs with the main character.

The basic gameplay of The Bards Tale is a single player adventure. The game uses the Champions of Everquest game engine from Snowblind studios, so if you are familiar with the popular top-down view method of gameplay you will feel at home here. Your main character can fight with a variety of weapons including huge two-handed swords and magical bows. But The Bard’s real strength is his ability to summon creatures to aid him using his music.

I have to admit, I was hooked on this game as soon as I summoned my first rat. I love summoning-type games. You have to find new musical tunes as you adventure that let you call new creatures into being. Eventually, you will be able to choose from 16 different summoned characters to fight with, and can have up to four in your party at one time, not including a little dog that will stick with you for the entire game if you can find him within the first town.

Each creature has different abilities and choosing the right mix of creatures to fight the right opponents is a key element of success. For example, The Brute will hurl rocks at enemies that pack a big punch. The Explorer will clear traps from your path by painfully hurling himself into them first and The Hag will heal your party as you take damage. That would be a pretty good mix for dungeon exploration, though you would probably want to add in The Lighting Spider to attack multiple opponents at once, The Assassin to kill off melee challengers or The Bodyguard to protect you from arrows, depending on the circumstances.

It is probably worth noting that the game’s actual connection to the original Bard’s Tale, one of the first computer RPGs, is a little tenuous. Brian Fargo was the producer for both titles. But the original story and world don’t really have anything to do with this new game, and of course the gameplay is a lot different. I am not saying this is a bad thing, but people should know that you are not going to be running around Skara Brae this time out.

The plot of this new tale is that The Bard basically just wants to continue his normal life, which consists of secretly summoning a little rat to scare tavern wenches and then rushing in to save them by dispelling it. In this manner he gets a warm bed and a cold mug of ale and often times some fringe benefits as well. It’s not exactly a grand strategy for getting ahead in life, but The Bard enjoys it.

Well, the world is changing. Bad things start happening around the world, like the dead rising from their graves, and The Bard ends up in the middle of it all. He would rather be chasing coin and cleavage, something he lets us know at every opportunity, but one thing leads to another and once you start down some paths it’s terribly difficult to get off them again. Besides, he is making a lot of money along the way.

The graphics are really good, as can be expected with using the Snowblind studios engine. Grass sways in the wind and parts when you pass through it, and generally every environment from snowy fields to dark dungeons looks very good.

The sound in the game is also excellent. There are even parts where characters will break into long songs, sort of Monty Python style, complete with a bouncing ball following the lyrics. These tunes are mostly very funny, like the first drunks you encounter who sing of the virtues of their favorite beverage to the little troll-like guys who appear and taunt you with songs each time you find a dead "chosen one" not strong enough to complete the path you find yourself traveling. My only regret is that you are never given the chance to slay those particularly annoying minstrels.

There are even multiple endings for the game, and what I would guess is the most popularly chosen one has quite a surprising twist. But The Bards Tale is not afraid to break rules. Combine that with the fact that every aspect of the title really shows the amount of time and detail that went into it, and you have an instant classic on your hands that provides a solid 20 hours of enthralling play.

The Bard’s Tale earns a full five GiN Gems for their treasure chest, a score that even the sarcastic Bard should not have a problem with.