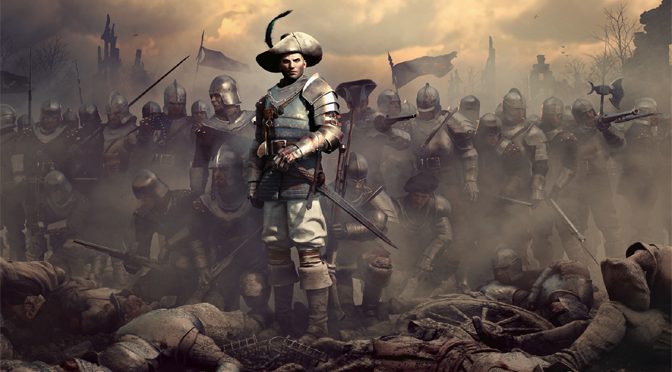 Developer Spiders has made a lot of really good role-playing games over the years. With each new product, they seem to improve their skill and expand their worlds. The last game that we reviewed from them was The Technomancer sci-fi epic, which earned 4 out of 5 GiN Gems. That game improved on Mars War Logs in just about every way, offering a bigger world and more detailed combat. The Technomancer was good, but still quite a bit short of being a polished, AAA-type title.

With their newest release, GreedFall, Spiders is attempting to finally produce a top tier game with all the expected bells and whistles. It’s clear that they want GreedFall to be a good game, and not just a good game “for an indie studio.” And although there are still a few notable cracks in that AAA façade, for the most part, they have achieved that goal. GreedFall offers a deep role-playing experience, acceptable combat, a large and unique world to explore, and about 35 hours of solid gameplay, with more if you choose to perform all the available side and companion quests. 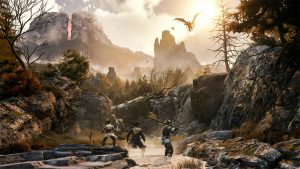 In terms of setting, the world of GreedFall is most like the colonial period of the real world. There are flintlock pistols and muskets in terms of personal firearms, though they are secondary choices for every character behind swords, clubs or other melee type weapons. Magic also exists in this world, and one of the available character classes for players focuses on it. Magic is exceedingly powerful in GreedFall. Characters who use magic can attack from range, but with far fewer limitations than characters with firearms, like not having to reload between shots. You can also stun enemies, drain their armor, knock down or stun several enemies at once, and heal your own party with your magic once you learn the requisite skills upon leveling up. With just a little bit of practice, magic can be almost overpowering. 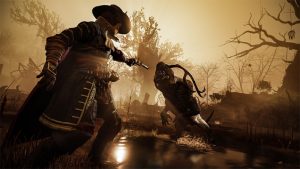 The world itself is rather dark as the national powers of GreedFall compete to expand their empires and exploit a newly discovered island that may or may not hold the cure for all their problems. Their biggest problem happens to be a plague that is killing people by the thousands. There is hope that the island may hold a remedy. There are three nations trying to expand their presence there, one that embraces science, one that is highly religious and powerful in the ways of magic, and a merchant consortium that tries to be friendly to everyone in return for profit. You come from that merchant faction. There are also natives who are indigenous to the island making up the final major group whose fate you may ultimately decide. 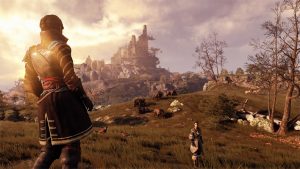 Thankfully, Spiders did not make each faction a cookie cutter representation of a nation full of diverse people. There are actually quite a few sub-factions and groups within each nation that may not act according to the rest of their country’s policies or desires. There are even other semi-major factions that work with all three nations, like the sailors who pilot the ships as a sort of sea-borne nation or the mercenaries of the coin guard that handle guard duties and protection for every city on the island. Sometimes those smaller factions can be more trouble than the larger ones. And the natives are not a single group of people either, but instead made up of many different tribes. Some want to embrace or even exploit the new visitors to their land, while others want to fight them to the death. 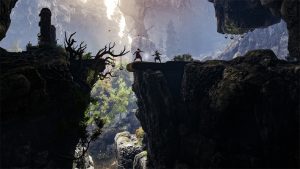 All of that political landscape matters because you play the legate of the merchant faction, which is sort of like a chief diplomat, though you also sometimes act as a spy, lawyer or special forces operative depending on the situation. You will need to navigate the politics of the island and placate or burn various factions as you work to unravel deeply held secrets. You also happen to be the cousin and best friend of your faction’s governor on the island, and also a member of the royal family yourself. Both of which will sometimes help to open doors for you.

Graphically, GreedFall looks great. There are a few notable glitches, mostly occurring around cut scenes, but those are more humorous than detrimental. The island itself is huge, and full of a lush and beautiful environment that changes depending on the region you are exploring. You will enjoy just looking around some of the more fantastic fantasy settings.

[amazon asin=B07TBGWMP7&text=Set sail for GreedFall with a copy of this amazing RPG from Amazon!] 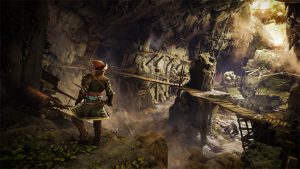 GreedFall is played in third person with a big emphasis on dialog and choices. It almost seems like those old-school RPGs made by BioWare like Jade Empire or even Knights of the Old Republic in that way. Those who like seeing their choices eventually shape the game world will have a good time with GreedFall. Those who enjoy a little bit more action or quicker pacing may feel a bit strained at times. There are a lot of FedEx type quests in GreedFall, and even some extended sequences where you are tasked with doing very dull tasks like researching zoning contract law or interviewing seemingly random citizens about an event they might have witnessed. Unfortunately, many of those extended fetching quests take place at the start of the game, so some players may not stick with GreedFall’s slow burn long enough for the game to get really good, which it does once some plot threads finally start to play out. 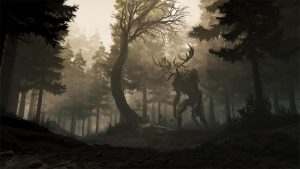 In addition to your main character, who can specialize in technology, magic or melee prowess, you also will eventually put together an adventuring party with two other NPCs. The NPCs are all varied in terms of their skills and each will have their own problems which you can solve by going on their companion quests. Again, this is very much like older BioWare RPGs in that respect. You are responsible for providing equipment for yourself and each of your party members, even crafting upgrades that can be quite powerful. Thankfully, your party members will at least handle leveling up themselves, so you don’t have to worry about that. You can swap out party members at your townhouses in each of the major cities (provided to you for free as the legate and diplomat of your faction) or at campsites in the woods that you establish. 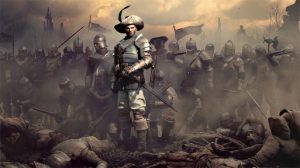 Combat is very fast paced. It reminded me of Final Fantasy XV in a lot of ways, probably because my magic-using character was able to warp around the battlefield and totally control the fights, stunning bosses while my companions picked off their minions, and healing everyone up when necessary. If things are a little bit too fast, you can use a tactical pause button to stop the action and plan your next action, attack or spell. Honestly, the combat was not really all that challenging. Once you discover that dodging or parrying pretty much makes you invincible, it becomes fairly easy to whittle down even tough or over-leveled opponents if you have enough patience. And after leveling up and equipping your team for about the first fourth of the game, the rest of the fights are probably going to be rapid slaughters other than the boss battles. Even then, you wont be challenged too much. 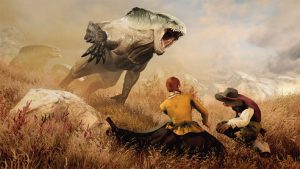 Other than a few times when the strains of making a game with a smaller team and budget are still a bit evident, GreedFall really shines. Those who love the old BioWare adventures will be in heaven here. But anyone with an appreciation of deep role-playing games will find a lot to like in GreedFall. It can be a little bit of a grind at times, but when it’s firing on all cylinders, it’s every bit as good as any RPG out there, but with probably a much more unique world to explore and (if you so choose) conquer. GreedFall earns 4.5 GiN Gems, and finally puts developer Spiders into that exclusive club of other AAA RPG makers.

Set sail for GreedFall’s mysterious island. I think you will enjoy the journey.