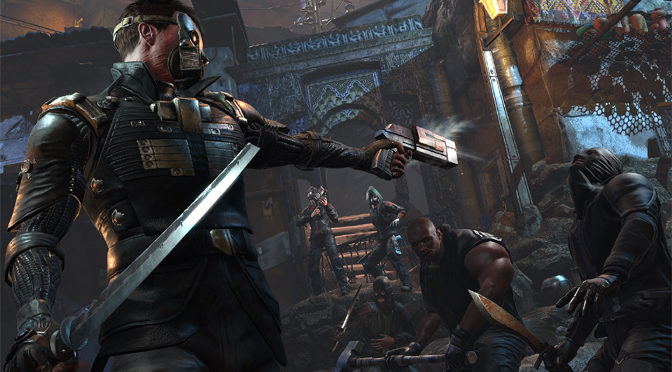 The Technomancer is a sci-fi, single player role-playing game that takes place on Mars, hundreds of years in the future. It’s basically a sequel to the Mars War Logs game from a few years ago. The name was changed, I think, to distance this title a little bit from that one, even though they share the same developer, publisher, Mars-setting and several game mechanics. But The Technomancer is a much better game, and a little bit more action-packed, so perhaps developer Spiders wanted it to stand more on its own.

The setting is an interesting one. The premise is that Earth founded several colonies on Mars, each run by a corporation which bore its name. But then something happened in the distant past and contact was lost with Earth. Nobody really knows what happened, but the player’s order, The Technomancers, are sworn to try and find out, and reestablish contact if possible. But they kind of have to do that in their free time because their primary job is to support their corporation’s troops in the endless wars that are waged against the rival colonies over things like water, which is in short supply.

The environment is a mix of modern and medieval technology. I would say steam punk, but there is none of the flair and style of a setting like that. It’s more of a dirty, postindustrial wasteland inside each of the aging colonies. Soldiers fight with clubs or pipe wrenches and shields, big shafts of metal or with daggers and pistols. A few NPCs also wield rifles, though guns are very much toned down and prone to overheating after every shot, so most of the combat is hand to hand, with a few pistol shots thrown into the mix for good measure.

[amazon asin=B01HJ14OT0&text=Charge up your gaming with a copy of The Technomancer from Amazon!]

With this odd mix of combat, the Technomancers are pretty much kings of the battlefield. Their powers are almost Jedi-like in nature, though they all revolve around electricity. Your most useful power is your ability to electrify your metal weapons. If everyone is fighting to the death with big steel clubs, and yours is crackling with electricity, you are going have a huge advantage. Technomancers can also toss lightning bolts some distance and also do things like generate shields to protect themselves from damage.

At the start of the game, you are working for the Abundance corporation as a newly-initiated technomancer. Your early missions pretty much put you in the role of policeman, though you are mostly free to follow your own path. Generally, major quests will end in a dialog where you can choose how you want things to play out. So perhaps you feel sorry for someone you were supposed to kill and want to let them go, or perhaps you want to arrest them, or perhaps you just want to kill them and move on. Don’t be surprised however, if your choices come back to haunt or reward you much later on, as the game does a good job of closing off loose ends over time. Eventually, your corporation will be politically taken over by a madman, and you will have to go rogue out into the wider Martian world.

Combat in The Technomancer is real-time and action oriented. It’s a lot more fluid than in Mars War Logs, and I was glad that I was playing the new game on the PlayStation 4 instead of the PC where I played War Logs. The controller made all the jumping and dodging around much more natural. Combat is not quite as precise as with, say, The Witcher 3. I mostly dodged around a lot and then did sweeps when enemies got close together, or quick hits when I could get behind someone. You can also do a disrupting attack which will stop their attack windups cold, and can even knock them on their butt. As fluid as the combat system is, it’s also quite difficult. Particularly late in the game, the enemies tend to pile up, and some of them are even issued armor that reduces electrical damage. I never felt like a total badass, but I was a capable fighter who could win most fights, perhaps after a reload.

Boss battles are almost identical to the mass combats, with the exception that the boss monster or bad guy has a huge amount of hit points. I actually found the boss battles to be rather easy since each boss has a weak spot. About 90 percent of them can be killed by simply keeping behind them and wailing onto their backsides. Given that most of the behemoths are slow, it makes it rather easy, though it takes a while. No, the massive everyday type battles where guys with pistols or rifles stand around the edges of the combat and shoot at you while the meat shields rush forward to pin you down were far more challenging and sometimes frustrating.

The game world itself is sort of open. There are several cities that you can visit and also ruins and things like that. Once you get somewhere, you can explore however you like, but are confined within that map. Unfortunately, a lot of the quests in The Technomancer, like over 75 percent of them, are FedEx types where you have to go to a city and talk to someone, or deliver something, or go somewhere to help someone who inevitably needs you to then go talk to someone, or deliver something, or go somewhere else to do something else. And other than map to map travel, there is no way to fast travel in the game. This is an incredibly huge design flaw, because it forces the player to tread over the same maps over and over again, fighting the same enemies over and over again as they keep respawning. It gets really tiring after a while. A couple inner-level travel points would be a godsend here, though it would probably cut off many hours of playtime.

Graphically, the game is really gorgeous, certainly the best thing that Spiders has ever created. The electrical effects are awesome and the people look very realistic. Mars is also a hauntingly beautiful place.

The sound is about average for an RPG. All of the main characters are voiced, and the voice acting is pretty good with them. The minor NPCs and vendors are a bit annoying because they all say the same things over and over each time you interact with them. The game has average background sound and music at different places, but nothing really memorable.

From a role-playing perspective, The Technomancer does a good job of telling several stories at the same time, and saving some of the biggest reveals until the very end. And the choices you make really do make a difference in the story, which is so nice to find in an RPG. Also, each of your five possible traveling companions (you can adventure with two of them at a time) also has a deep backstory and problems to solve, a few of which really touch into the central plot of the game. You can also romance the companion of your choice, and both gay and straight romances are supported.

In addition to the combat and the story, there is also a deep crafting engine. You will need to craft components to improve both your weapons and armor, and there are never enough of the high-end components to go around. I crafted everything so that both myself and all of my companions always had the best armor and weapons for each stage of the game, even earning a PS4 trophy for making over 100 modifications. You probably don’t have to go quite that far, but will want to at least beef up your starting gear a bit. It really does give you an edge, no pun intended, in the combats if you do a bit of crafting improvements.

I had a really great time with The Technomancer and did just about everything the game had to offer including every side and companion quest. There were times when I could not get enough of the game and would play for hours on end, and times when it dragged on too much with low-level FedEx fetching. But in the end, The Technomancer makes for a very good sci-fi themed RPG that should appeal to a lot of different types of players. It may not make anyone’s game of the year lists, but is an enjoyable game with a lot to like, especially if you like sci-fi and RPGing.