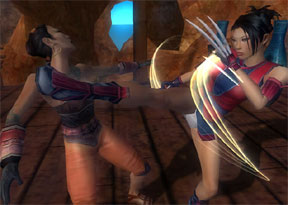 Normally I’m not the biggest fan of role playing games. Typically I find them slow and tedious, with me having to take forever to raise my character’s stats. I am a very impatient person and want to get right into the action. I don’t want to stay in a specific area so I can level my characters up. And when I do take part in combat, I don’t want the same old command driven combat where my characters take forever to execute a move (Final Fantasy ring a bell to you?) Originally I felt that RPGs were very formulaic and that the genre would never change.

Then Star Wars: Knights of the Old Republic arrived at my door. From that moment, role playing games were more attractive. The setting peaked my interest, and the combat was fast and involving. I felt as if I could finally get by in the RPG market.

And now, the developers of KOTOR, Bioware, have done it again with their recent release of Jade Empire. In my opinion, they could have just slapped the gameplay of KOTOR, modify it to an ancient Chinese theme, and I would have been impressed.

Nonetheless, all that was good in KOTOR is now even better with Jade Empire.

Fans of wire-fu Chinese epics like Crouching Tiger and House of Flying Daggers will be at home with the setting, as well as the combat. As a student under the watchful eyes of Master Li, your village is attacked by an unknown force. Not only that, but one of your peers, a jealous individual, is entranced by the evil force. From there it is an epic adventure to find out about the problems surrounding the Jade Empire, but it all is not as straightforward as it seems.

Just like in KOTOR, your character’s development can progress in two different directions. If you follow the path of the "open hand," you will seek the path of the light, assisting others in time of need and showing compassion and humility to those around you. But choose the path of the "closed fist," it is similar to going to the dark side, thinking only of yourself and gaining power.

This element is also included in the conversations. When provided with a choice of dialogues, some special dialogues that consist of either persuasion or lying can be chosen, and that too can affect your character’s persona. That is the beauty of Bioware’s RPGs on the Xbox, the openness of deciding which path you want to take, and it has become the staple of many recent role players such as Fable. (Heck it was even used in NASCAR 2005, believe it or not!)

Combat is also similar to that in KOTOR, but feels a bit more action based. Basic combat is done in a rock, paper, and scissors fashion. In this case, blocks beat regular attacks, power attacks beat blocks, and regular attacks beat power attacks. But in addition to the basic combat, there is also a Focus mode which allows the whole world to slow down, making your attacks more powerful. Weapons such as swords can also be used in combat, as well as various martial arts styles that are learned along the way.

Jade Empire’s visuals are drop dead gorgeous. The game catches the settings of ancient China perfectly. Every character is artistically detailed, and animate fluidly. There are some concerns about drops in frame rate though.

As for the audio, the soundtrack also captures the feeling of ancient China perfectly. Voice acting is also top notch. Most of the characters don’t have an authentic Chinese style voice, but then again, it almost gives the game a dubbed style that fits well with the genre.

Jade Empire will take about 20 hours to complete, and the experience is well worth it. Those who enjoyed KOTOR, and especially fans of wire-fu Chinese epics will feel quite at home with Jade Empire.