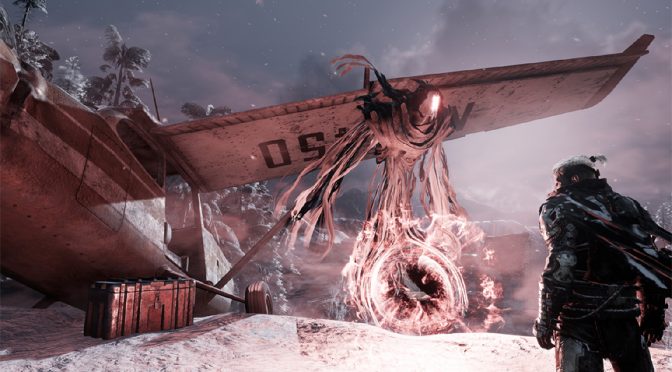 Fade to Silence is a game that by all accounts should appeal to me and my personal tastes in gaming. Man versus a harsh environment. Check. Building a fortified base to keep back the darkness. Check. Meeting interesting NPCs and creating a coalition of odd and unique people to help out. Big check. And in truth, Fade to Silence has all of that. The problem is that most of these elements are poorly implemented or done in a way that they sort of compete for a player’s attention and thus never get the chance to really shine. Really, if the developers dropped a couple items and really put more emphasis into whatever was left, Fade to Silence might be a better game. 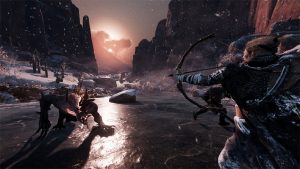 You play a man named Ash, though you don’t really get to know him very well, and you don’t build him out like you would in a role-playing game. All you really know is that you are special in some way because there is this powerful demon creature who watches over you and comments on your failures (more on him in a bit). You also have a daughter, though there is almost no chemistry at all there. The world itself is supposed to be a mystery, a frozen wasteland that reveals its secrets in little snippets and voice logs that you find along the way. And for the most part, it does that. It’s just not an overly compelling tale, and the amount of time that normally happens between each discovery makes it even more forgettable. 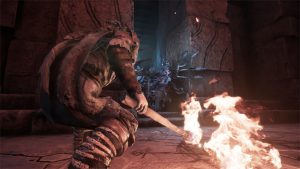 The game features perma-death, which I am not a big fan of, though I understand that many people enjoy the tension that comes from knowing that your next step could be your last. It makes taking huge risks all that more exciting because you are actually risking something tangible: all of your progress in the world so far. You start the game with three lives, and can earn more as you progress, though it’s much more likely that you will be losing them. Once your last life is over, the game world resets and you have start from nothing once again. If you did well enough on your playthrough, you can earn bonuses that will carry over, like more wood or food for your starting camp, though that might be a small comfort if you have to play through the entire world once again, especially since the world seems exactly the same each time. 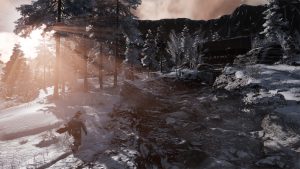 The perma-death is made worse because of what I consider one of the worst design choices for a videogame in recent memory: having your own in-game tormentor. Remember that demon from before? Well, he does not like you very much, and he can talk directly into your head. So basically, the game teases you every time it’s able to beat you up, which is a lot given the overall difficulty. If you are getting too cold, it will torment you and tell you how worthless you are that you can’t even find a place to get out of a blizzard. If you get rocked by a monster, it tells you how pathetic you are that you could not properly fight it. And when you die, the demon manifests so that it can do a little happy dance over your dead body, followed by more teasing. Fun, right? 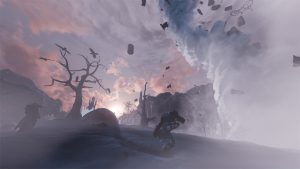 Honestly, he reminds me of a little twerp dungeon master I had in middle school for about five minutes who only wanted to wipe out the party so he could feel superior and make fun of the RPG group. We beat the crap out of him by the way, and the demon from Fade to Silence deserves no less. It really LOWERS the fun level by quite a lot just having him in there being so pervasive and obnoxious. Bad, bad design choice. 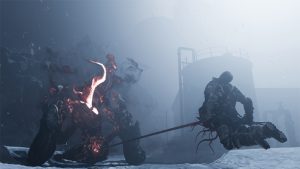 The gameplay comes down to about three elements. The main one is kind of like a giant capture the flag game. As you explore you need to do little tasks to unlock zones. Once you do, your camp followers, assuming you have recruited any, will be able to gather resources from that area to keep your fortress safe, warm and well-fed. It is interesting trying to balance the number of followers you have, who all consume resources, with what they can offer you in the way of special skills and buffs. 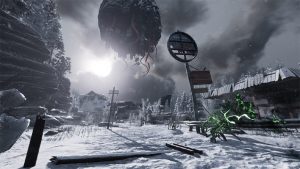 The second element is exploration and combat. Here the beauty of the game really shines. It really is fun to poke around this abandoned world where you can occasionally see glimpses of what it was like before. Unfortunately, most of those things are just window dressing. I was hoping that if I found like an old gas station, that I could make it into an outpost where I could keep out the cold, and retreat to in order to pick up supplies and rest, or even to hide from a monster. But the world of Fade to Silence does not really play by that kind of logic. It’s not like The Long Dark at all, which is 100 percent better at simulating wilderness survival. The world here is basically just a backdrop to find seemingly random resources scattered around. You don’t even really use structures to fight the cold. If a blizzard kicks up, you basically need to find a save point, which is represented by a tall blue light. That point might be a shack with two walls and a trash barrel, a poor shelter in real life, but as long as it has the save light, its where you run to when you know winter is coming.

[amazon asin=B07G1YHM2P&text=If you are looking for a challenge, you can grab Fade to Silence from Amazon on the platform of your choice!]

Combat is brutal and pretty unfair, another big negative for a perma-death game. Each monster has a pattern that it uses, and the key is fighting it (and probably dying) enough that you can figure out when to dodge, block, and strike it. Once you master that, then you should be able to beat every monster of that type in the game. But it’s a long road to get there, with a lot of permadeath forced restarts. 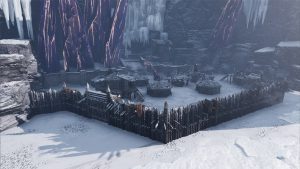 The third element in the game, and one of the most unique and fun if you ask me, is base building and crafting. Over time, you can build up a powerful enough base that you and your followers can live in relative comfort, with buildings providing powerful bonuses once constructed and maintained, like building a sled and a dog team that enables merciful fast traveling across the large map. You also need to build up enough of an infrastructure to support the followers you have managed to recruit out in the world, though that is often a tradeoff too that needs balanced. 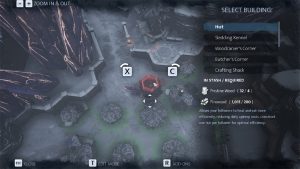 For example, each follower would really love their own cabin. Building one will rapidly reduce the amount of wood they consume each day to try and keep warm, though it will cost a lot of wood to build the structure. So you need to figure out what to invest in to make it for the long haul. Defenses are also important, because occasionally your base will get attacked. Though in truth, that part of the game is more of an annoyance and not really a true danger, especially if you have a good fortress and lots of helpers. Of course, if you die, your base and everything you have built goes away, so the more you build, the more you risk I guess.

Crafting also includes personal weapons. Ash can use both melee and ranged weapons, though the game seems more skewed towards melee combat with bows reserved for things like hunting deer. And there is little variety in the swords and bows other than higher level ones do more damage. 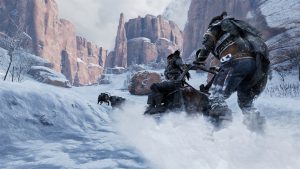 There are also, sadly, a lot of bugs in Fade to Silence. These range from oddly helpful like a monster getting stuck on or in terrain, to predictably bad like said monster suddenly popping back into existence right in front of you and almost cheat killing you – followed by that annoying demon calling you a POS because the game just unfairly took one of your lives. If the game is going to enforce perma-death, it should at least be bug free enough so that the playing field is fair, or it’s just going to annoy players – just ask my middle school DM about that. There are also a few game-ending bugs, though thankfully they are few and far between. 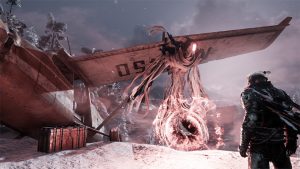 Overall, Fade to Silence feels kind of empty in a lot of ways, like the developers created this beautiful world and then added some flawed concepts or gameplay elements that are just not very good or polished. It’s also possible that the game is simply unfinished, though I waited a few weeks in the hope that patches would make things better before writing this review. Again, I really, really wanted to like this one.

Fade to Silence is certainly unique, but that does not make it good. It had a ton of potential, and that might be the saddest thing about this title. But as it stands right now, it’s just not very fun to play, and not very fair to the players who really buckle down and try to push their way through this below average adventure.