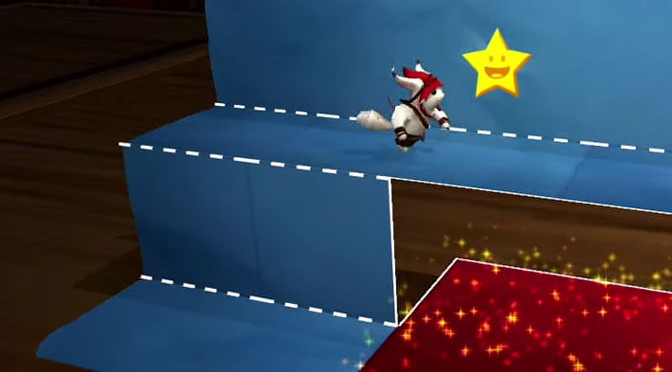 Fold the Adventure is a puzzle game revolving around making cuts and folds in digital paper to build a platform to climb on to collect stars and proceed to the next level. The tutorial starts easily, and rapidly plunges you into the world of Nezo, an adorable rabbit like creature who is commanded by your finger. Nezo can walk and jump up to any platform you create within his reach. The concept is easy but some things are easily forgotten (mainly non-cube platforms).

If you’re stuck on a level my ultimate suggestion is to replay the first four or so levels. They’ve saved me from jams several times! I wish with games like this the tutorial was divided up so that you didn’t learn everything up front only to forget it by the time you need that. Or maybe that’s just me.

The box-cutting feature in the game is absolutely genius, first of its kind I’ve ever seen. But sometimes when a box should be a box it isn’t, which frustrates me, but you have to look at it from more than one angle. I know that’s vague, but once you start playing, you’ll see what I mean.

Enemies and hazards in this game are varied. For example there are fire elements that constantly move and when touched restart the level over instantly. These are brutally frustrating. Avoid at all costs. Another hazard is torn paper which can be walked over but not cut or folded. Why? Why can’t I cut or fold it just because it’s torn? Noooooo! Then there is also red paper that emits a shiny sparkle that, like the torn paper, can’t be folded or cut, but it also can’t be walked on. There are other hazards, but I’ll leave those for you to discover on your own.

Overall this game has provided hours of hair pulling but highly rewarding gameplay. I wish the developer would provide more easy levels to enforce certain techniques, but the amount of levels currently provided have enough variety to keep even a puzzle master interested.

Fold the Adventure earns 3.5 out of 5 GiN Gems, because even though it doesn’t have enough teaching levels, and there are some annoying mechanics, it’s still a solid and innovative game. Just remember, the next level is always harder!