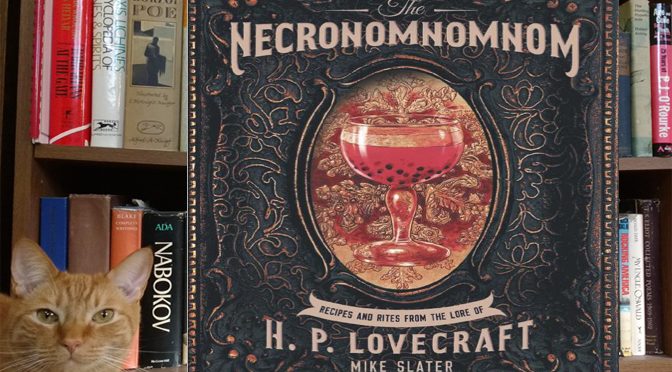 The Necronomnomnom: Recipes and Rites
from the Lore of H. P. Lovecraft

Although sometimes passed over for the honor he deserves, H.P. Lovecraft was one of the first, and some would argue the best, writers of modern horror fiction stories. His creatures and the lore that he created were so alien to most readers that he didn’t get a lot of credit, fame or fortune while he was living.

Today of course, he is more celebrated. The pen and paper role playing game based on his works and lore is one of the most interesting that you can play. And it’s unique too, where losing one’s sanity is more of a danger than actually getting your adventurer killed. You can pick up complete anthologies of his works, and if you have never read them, I would highly recommend it. Other than a few little cracks in the works as a whole, they survive and remain relevant even today. 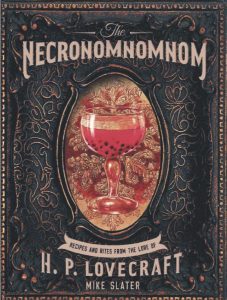 There are also a number of great videogame adventures that are set in H.P. Lovecraft’s twisted worlds. They include titles like the detective thriller The Sinking City or Call of Cthulhu, named after one of the Great Old Ones that Lovecraft created, and action games like Achtung! Cthulhu Tactics. Even games not directly tied to Lovecraft have elements that are clearly influenced by him, and the same goes for movies and books these days. So Lovecraft is everywhere, even if you don’t see it at first.

And while all of these games, books and movies help to fill our senses with Lovecraft’s weird and almost cerebral sense of horror, they tend to leave one major sense out of the loop: taste. Yes you can see and even hear Lovecraft’s works. In a few places you can actually touch it. But taste, that is something that is a little bit out of reach…until now.

The Necronomnomnom: Recipes and Rites from the Lore of H. P. Lovecraft cookbook perfectly captures the flavor of those stories. It offers 50 traditional and original dinners, desserts, drinks and side dishes twisted into shapes and colors that scream Lovecraftian horror. For the most part, the foods are recognizable, and following the plan in the book will yield yummy, if bizarre-looking, creations. For example, the fun party staple Pigs in a Blanket are reborn here as Cultists in Robes, complete with instructions on how to prepare it so it really does look like a person wearing a little robe. 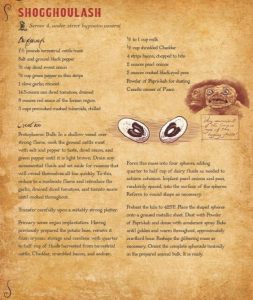 A few dishes are pretty unique, like At the Fountains of Madness, which creates little red ice cubes of cherry syrup (looks like blood) with an entrapped gummy bear in the center. It’s both tasty and unsettling, like most of Lovecraft’s works. Little touches like this would help to elevate any Halloween party or horror-themed gathering. Other interesting recipes include The Deep Fried Deep One, Nog Sothoth, The Gin and Miskatonic, and many others.

Recipes are divided up by category, so if you are looking to make a fun drink, you can find it in that section. Main courses, side dishes and desserts also get their own block of recipes. Each recipe comes with ritual-like drawings showing generally how the finished product will look pretty horrific for the delight and disgust of your guests. In general, the book tries to look like a slightly friendlier version of the fabled Necronomicon, a tome of lore from Lovecraft that drives anyone who reads it insane.

[amazon asin=1682684385&text=Are you hungry for a little Lovecraft lore? Pick up this unique cookbook from Amazon and add some scary spice to your next deadly dinner party!]

You might feel a little bit insane yourself trying to figure out some of these recipes. They are written like magic rituals themselves, not traditional cookbook recipes. I believe this was done in order to help those cooking the deathly dinners to have a little bit of fun in the process. Thankfully, there is a section of cheats in the back of the book that describes each recipe in plain English. It’s good that these are included. While it might be fun to try and decipher the rituals, ruining a dinner or even a valuable side dish probably isn’t. If you are trying to create a lot of these foods on a deadline for a party, simply work from the translations in the back. 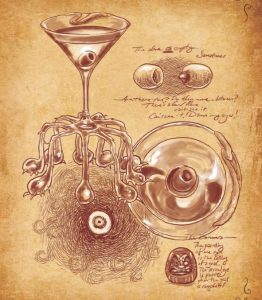 The book itself provides a striking presentation. It has a nice black and gold cover and thick, colorful pages that look like faded parchment. In fact, it reminds me of a Dungeons and Dragons supplement book more than anything else. I’ve been reviewing a lot of those lately, and this has the exact same look and feel and even size of one of them. If you know someone who is really into horror or Lovecraft, this book would make a fine gift, and look pretty cool on a shelf, even if you never make any of the frightening foods inside.

It’s rare that a book these days is surprising, much less when talking about a cookbook. But The Necronomnomnom Recipes and Rites from the Lore of H. P. Lovecraft fills that role. I doubt it will ever find mainstream acceptance, but for those who love Lovecraft or throwing interesting Halloween parties, this is one tome of lore that is both fun and tasty to dive into.