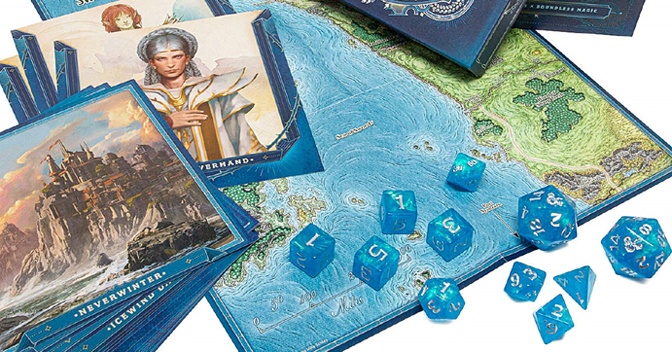 Over the past couple years, Wizards of the Coast has been really beefing up its Dungeon and Dragons offerings with both new content, and revising older adventures from the 1970s and 80s with refreshed covers and updated rules. What was once almost a forgotten property is now fully rekindled and supporting of the robust role-playing community.

Just in the past year or so, we have reviewed Dungeon and Dragons content in the form of the revamped Eberron campaign setting, comical offerings like the Rick and Morty module, a trip to both one of our favorite cities and also hell in Baldur’s Gate: Descent Into Avernus, a revision of classic modules in Ghosts of Saltmarsh and even a Betrayal at Baldur’s Gate board game modeled after the Betrayal at House on the Hill games. And that is just to name a few titles. Good old Dungeons and Dragons is fully supported once more.

So now we come to the latest offering, Laeral Silverhand’s Explorer’s Kit. Honestly, as a collector of all things dodecahedron and polyhedron, you know – dice, I was really looking forward to this one. The ice-blue dice with silver lettering is the highlight of the whole package. I’ve never actually seen dice like these before, and I have hundreds of different kinds made from various materials. 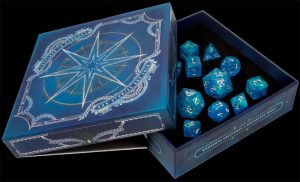 These dice are plastic and to me look like glacier ice. Some people may not like the fact that a few of the dice seem to have bubbles inside them. That might be a flaw in the way they were cast, but to me that just makes them appear more like chunks of frozen ice. The lettering on the crystal blue surfaces is silver, which further adds to their beauty. Finally, the famous “&” symbol graces the surface of the two d20s in place of the number 20. That will make rolling a 20 even more special and add a little spice to your critical hits.

At about $20, the kit is worth it just for the premium set of dice. Nobody is going to have anything like it in your group. The kit comes with two large d20s with the special symbol, four d6s, a d8, a d4 and a d12. You also get two d10 for percentile roles. One of the d10s just has single digit numbers for things like rolling damage while the other has the ten-factor numbers like 20, 70 and 80 for rolling percentages.

[amazon text=Pick up your own set of ice blue gems with a copy of Laeral Silverhand’s Explorer’s Kit from Amazon!&asin=0786966998]

The box that the explorer’s kit comes in, which is protected by a hard plastic shell before you open it to prevent any scuffing, is made of hard cardboard with a black felt lining. It makes for a great carrying case for your dice. Also, while it’s a little small, either the top or bottom of the box (both are lined) can be used as a tray for rolling dice and keeping them from getting away. It’s nice for cramped quarters or small tables where the dice could easily tumble to oblivion if you’re not careful. 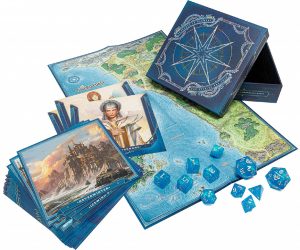 In addition to the dice, you also get a few extras. The first is a set of 20 adventure cards. These are pictures and descriptions of some of the interesting people, places and groups within the Sword Coast and Waterdeep. People include famous travelers like Drizzt Do’Urden, Lord Dagult Neverember and of course Laeral Silverhand. Places include Baldur’s Gate and Candlekeep. And groups include the Harpers, Zhentarim and the Cults of the Dead Three. You get a nice illustration on one side and a small writeup on the other.

The cards make for good adventure hooks, or flavor for a homegrown campaign, though I wish that some form of pocket adventure would be included. Even something like a random loot table specific to the Sword Coast would be a little more helpful than the cards. Adding some kind of a mini-adventure or starter ideas for a campaign might be something worthwhile to consider for future kits, as they would really make them even more desirable. 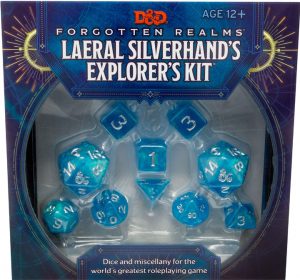 The last thing that you get in the kit is a six panel fold out map. One side of the map shows the entire sword coast. I’ve seen that classic map before in a lot of places, even in videogames, but never had a standalone version. It’s nice for seeing at a glance just how far away The Cloakwood is from Waterdeep, or The High Moor from Fort Morninglord.

The back of the Sword Coast map shows the city of Waterdeep. Unfortunately, the detail of the Waterdeep map is pretty sparse. You get a bird’s eye view of the city with different districts labeled, but no landmarks or the locations of things like famous taverns or meeting places inside the city. Still, it makes for a nice handout for a campaign set in or passing through Waterdeep.

Honestly, if you are buying Laeral Silverhand’s Explorer’s Kit for the dice, then you will walk away happy. They are pretty amazing. The fancy box which doubles as a carrying case and rolling tray is also pretty cool. And the cards and map make for interesting reading if nothing else, and should be considered nice little extras. Overall, the kit is a pretty nice package, with some of the best dice sets I have seen in a long time. It’s more than worth the money to add this quality kit to your own D&D arsenal.