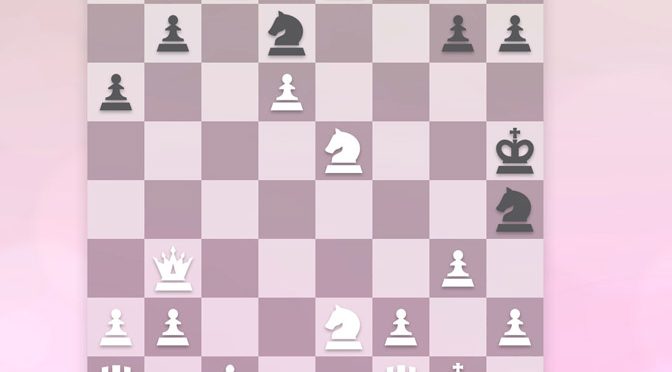 Zen Chess: Mate in One

This week’s time wasting comes in the form of a puzzle game called Zen Chess: Mate in One. A Steam code for the game was sent to me by the developers and I was more than glad to check it out.

If you couldn’t already guess, Zen Chess: Mate in One is a puzzle game that involve chess. The game features 100 puzzles that players will have to solve to complete it. Each of these puzzles will give the player different scenarios that they will have to solve. These challenges include some that players may not encounter during a real game of chess. Either way, players will only have one move to solve the various puzzles and put the king in checkmate.

Seeing as there are 100 puzzles for players to complete, Zen Chess: Mate in One offers a good value for its low price of 99 cents. How challenging the game is will depend on the player’s skill level. For me, I found some of the puzzles to be challenging while others were quick to solve. I’m no chess master, but I did spend a fair bit of time playing with friends back in high school. However, that was 10 years ago now and I’m much more rusty than I’d like to admit.

Honestly, there really isn’t much else to say about the gameplay in Zen Chess: Mate in One. The game is going for a super minimalist style and it does this very well. It may even be a little too minimalist . There are no descriptions for icons in the game and players won’t know what they do without clicking them first.

The graphics in Zen Chess: Mate in One follow that same minimalist style as the rest of the game. This means that the chess board and pieces are just simple 2D images. Players can change the color of the board and can also choose a couple of icon sets for the pieces, but that’s about it.

In addition to the minimalist graphics is the minimalist audio in Zen Chess: Mate in One. There’s a single soothing song that plays during the background when solving puzzles. Outside of this, there really isn’t much else. I get the minimalist approach, but I think a little more could have been done.

Overall, Zen Chess: Mate in One isn’t a bad game for just $1. The puzzles are fun and the game is clean. Just don’t go into it expecting any replay value or fancy graphics.