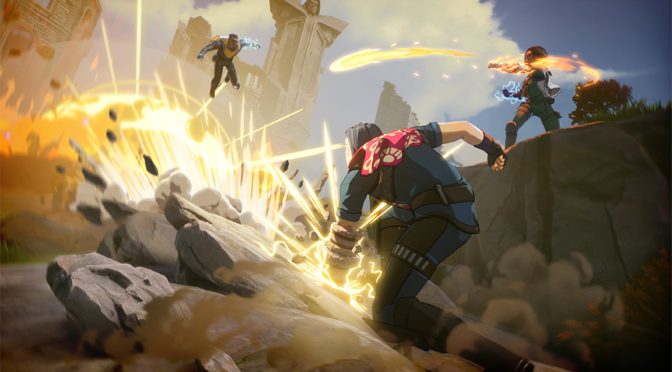 Greetings and salutations gamer fans! This is Modern Gamer coming at ya with another great MMO called Spellbreak!

First some basics. Spellbreak is a platform MMO, which means you can play it on your PlayStation or Xbox. What I really like about this game is that has cross playing. Meaning you can finally play with people who play the same game with a different console. Honestly, I was wondering, like a lot of you, when things like this were going to happen. I think it’s great, because you can still play Spellbreak no matter which console you’re a fan of. There is also a Switch version and a PC one available through the Epic Games Store. Great job guys! 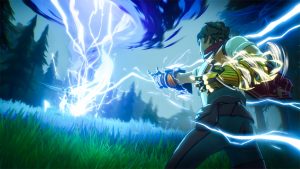 The story seems pretty straight forward. From the moment I made my account, the first thing it said was “You have been lied to all your life. Magic is yours to use. I can show you how. Come with me. I’ll show you what it means to become a Vowbreaker.” Following along with this pretty lady with purple hair in the front, she tells you that she’s able to use magic and is a criminal because she can use it. But she’s here to train you.

You can use gauntlets to use spells and you have sorcery (the magic that comes from within) at your disposal. You can wield two gauntlets to combine your elemental abilities. Guys you can levitate in Spellbreak, I love it! There are also usual things in Spellbreak. You have your scrolls to level your abilities, and equipment like boots, helmet, etc.

The opening graphics are beautiful. I like the style of art as well. It reminds me a lot of the Dragon King series from Netflix and the movements in animation remind me of Wakfu. This game is nothing short of an animated painting. It looks so fantastic. 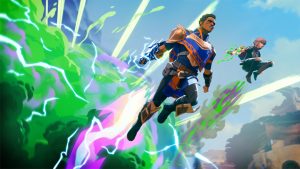 Now just letting you guys know that this is totally a PVP match MMO. So if you like games like Guild Wars or Fortnite, This game is for you. So the dynamics of the game are all about how you use your spells to destroy your enemies or rather a combination of spells and sorceries. As stated above you can combine different elementals powers to make new spells. Like fire and toxic can be combined to make explosive gas. Or fire and wind can make a fire tornado. Pretty cool huh? 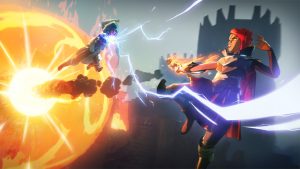 The gauntlets aren’t all that’s cool in the game. I really like the relics you carry around with you. They all have unique abilities as well. Like wolf sight allows you to see hidden enemies, a dash relic that makes you go faster, and even an invisibility relic. All these don’t last very long at all. So you have to be quick about making your moves. You’ve also got your potions and armor recovery items. They take a bit for you to recover your health so make sure you’re hiding. Once you finish the tutorial you’re sent to an island to practice your aim and switching out new stuff. This is only a tutorial though. You have to exit to the main game to get to the real play. Once you do, you’ll the options of getting your gauntlet in. You’ll have to look for the rest of your loot yourself while in the game.

Matches start quickly so make sure you grab what you need. Then it’s off to PVP land. Not gonna lie, PVP isn’t really my forte. If you die you will turn into a puff of smoke and eventually go to the main menu if people don’t revive you. Then you’ll start all over again. Which is fine if you don’t mind losing all your gear. 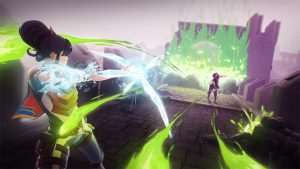 Ok so like any free to play the game, like Black Desert, you can purchase gold to get better items. You can get a starter for $5 for instance. You have outfits that you can put on as well. There are collections and all kinds of special loot.

In short, I think Spellbreak is perfect for those that need a magical version of Fortnite. What I like about this game the most is that it seems like a great streaming game. Yes, I think that if anyone wants to do game streaming and make some money Spellbreak is it. It’s fun and exciting to watch other players. Please give this game a shot. I think this is pretty magical.

Well, that’s all for now, Modern Gamer out! Check out linktr.ee/delerias to see what the Modern Gamer is up to in her spare time.